VENICE, Calif., Nov. 25, 2019 (SEND2PRESS NEWSWIRE) — “Music to My Years, Life and Love Between the Notes” (ISBN: 978-0983655039) by film and TV composer and conductor Artie Kane won the 2019 Readers’ Favorite Gold Medal in the Non-Fiction and Music/Entertainment category at the annual Reader’s Favorite awards held on November 23, 2019 at the Regency Hotel Miami. 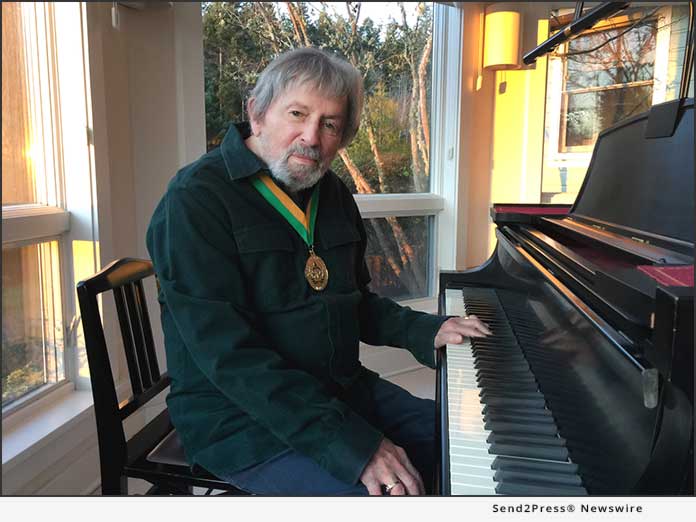 The memoir “Music to My Years, Life and Love Between the Notes” spans Artie Kane’s fifty years working in the entertainment industry. Kane conducted scores for over 60 motion pictures, wrote music for over 250 television shows (“Wonder Woman,” “Vegas,” “The Love Boat,” “Hotel,” “Dynasty,” “Matlock,” “Question of Guilt,” “Man Against the Mob”) and seven motion pictures, such as “Looking for Mr. Goodbar,” “Eyes of Laura Mars,” “Night of the Juggler,” and “Wrong Is Right.”

From his humble beginnings in Columbus, Ohio, as a child prodigy on early radio, to the stages of New York and finally the movie industry in Hollywood, Kane with candor and acerbic wit recounts his quest to find love through eight marriages, four girlfriends and three sons as he pursued his dreams as a pianist.

“Artie Kane is unique … uniquely intelligent, brilliant, and in spite of his struggles with himself…uniquely lovable. Also, for anyone interested in the inner byways of the Hollywood musical scene, his book is a highly recommended read,” said John Williams.

“Coming from a music-loving, humorous, and glamorous Hollywood family, I found this book encompasses all those things, and more. A wonderful read,” said Joan Benny.

“Artie Kane’s personal story is by turns amusing, depressing, uplifting, disastrous, and hilarious…but always fascinating. While fostering an early prodigious talent and evolving into the highly developed artist he is today, he has used his years (and his ears!!) to learn and absorb all the aspects of music and life that have confronted him. I feel blessed to have known him and continue to be astounded by his constantly evolving perspectives. Prepare to be amazed! (and amused!!),” said Dave Grusin.

“Music to My Years: Life and Love Between the Notes” is available (Hardcover, dust jacket, 369 pages, 197 photos) on Amazon and https://amphoraeditions.com/product/music-to-my-years-life-and-love-between-the-notes/.

It is also available in electronic format on B&N Nook and Kindle and Audible.

ABOUT THE NEWS SOURCE:
Amphora Editions

Just as the amphora was used by ancient Greeks to ferment and store fine wine, Amphora Editions is a “vessel” for fine, creative works. Our goal is to inspire, inform, and transcend. In 2013 Amphora Editions was born, after merging and assuming ownership of another family business, Cody Publishing, Seattle, Washington.

LEGAL NOTICE AND TERMS OF USE: The content of the above press release was provided by the “news source” Amphora Editions or authorized agency, who is solely responsible for its accuracy. Send2Press® is the originating wire service for this story and content is Copr. © Amphora Editions with newswire version Copr. © 2019 Send2Press (a service of Neotrope). All trademarks acknowledged. Information is believed accurate, as provided by news source or authorized agency, however is not guaranteed, and you assume all risk for use of any information found herein/hereupon.