ARDEN HILLS, Minn., Nov. 14, 2019 (SEND2PRESS NEWSWIRE) — Catholic United Financial, the oldest fraternal benefit society domiciled in Minnesota and one of the longest continually operating businesses in the state, has announced that for the first time in the company’s 141-year history, its total assets have exceeded one billion dollars. 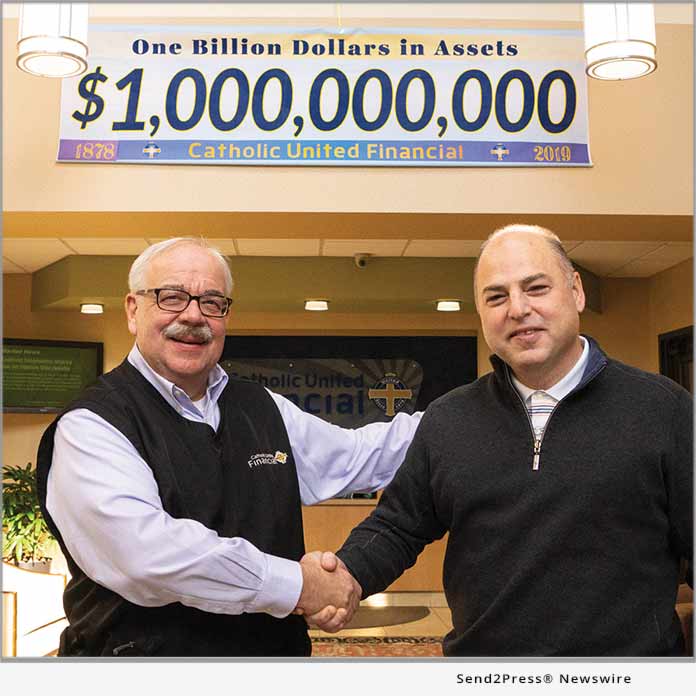 The Association’s ascension to a billion-dollar business is attributed by President Harald Borrmann to Catholic United Financial’s unwavering commitments to its members’ financial security, its ethical and conservative investment strategy, and its own historical goal to be there for every subsequent generation of Catholic family in the Upper Midwest.

“We have members today whose families were among our founders in 1878, and members who discovered us a month ago at a volunteer event,” Borrmann said. “Our commitment to the financial security of those families, and to their communities, is the same – that we will be here in another 140 years to meet our obligations to them.”

Catholic United has gone by several names since its founding in 1878, but it has always existed for the purpose of providing financial stability to Catholic families. When the pioneers of Minnesota began to settle into communities, they learned quickly how the death of a breadwinner could condemn a family to poverty and despair. Associations began to pop up among the German Roman Catholic parishes, requiring a small premium during the good years to ensure a family was taken care of should the worst occur. It was the merging of ten of these small community funds on January 8, 1878, which formed the original Die Gegenseitige Lebensversicherungs – Gesellschaft der Deutshen Roemisch-Katholischen Unterstuetzungsvereine des Staates Minnesota.* Charter members numbered 485, and it owned $635.73 in assets.

Despite the mass of its accrued assets, the Association is essentially a financial not-for-profit cooperative. After operating expenses are paid and reserves set aside, remaining funds are reinvested or returned to membership through dividends, charitable contributions and fraternal benefits. The Home Office directed more than $2 million to fraternal causes in 2018 alone, through its network of local outreach groups.

It took Catholic United Financial 126 years to build $500 million in assets, a milestone passed in 2004. Doubling that sum took only 15 years, despite the still-lingering effects of the Great Recession which drove down interest rates through most of those years. Today, both assets and surplus are at all-time highs.

“We’ve had tremendous success because of our company’s incredible focus,” Borrmann said. “Our sales reps are members of these communities, our staff know who we serve and are mostly members themselves, and our Board of Directors is involved and determined. All our business decisions come down to the simple question: ‘Is it good for the member?’ That guides our every decision.”

Resources and photos for news media can be found here: https://www.catholicunitedfinancial.org/media-content/

View More Insurance News
"We have members today whose families were among our founders in 1878, and members who discovered us a month ago at a volunteer event," said Harald Borrmann, president.

LEGAL NOTICE AND TERMS OF USE: The content of the above press release was provided by the “news source” Catholic United Financial or authorized agency, who is solely responsible for its accuracy. Send2Press® is the originating wire service for this story and content is Copr. © Catholic United Financial with newswire version Copr. © 2019 Send2Press (a service of Neotrope). All trademarks acknowledged. Information is believed accurate, as provided by news source or authorized agency, however is not guaranteed, and you assume all risk for use of any information found herein/hereupon.