A gala fundraiser will climax the company’s annual conference, held this year in Seattle; proceeds will go to the Alzheimer’s Association.

SEATTLE, Wash., Jan. 9, 2017 (SEND2PRESS NEWSWIRE) — For the second year in a row, ACSIA Partners, a national long-term care insurance agency based in Kirkland, Wash., will join the fight against Alzheimer’s disease. As part of its three-day annual conference, the company will host a fundraiser on behalf of the Alzheimer’s Association, which seeks a cure for the debilitating disease. 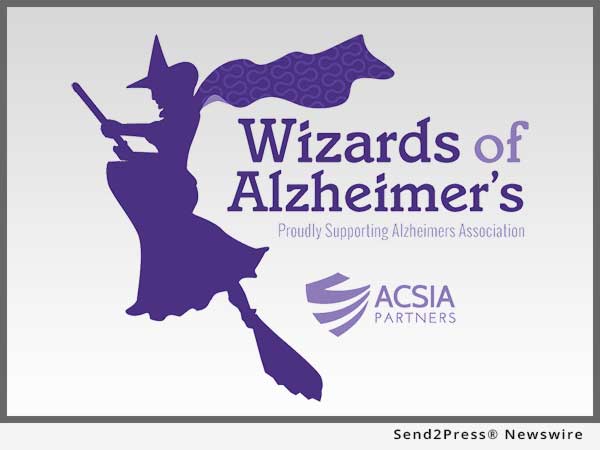 The gala event, on January 14, will be held at the Sheraton Seattle Hotel. The company has hundreds of agents nationwide, all invited to the conference. Those attending the gala will don purple capes as “Wizards of Alzheimer’s” to highlight the need to “kill the wicked witch.” Media representatives are welcome.

Why the company’s interest in Alzheimer’s?

“It’s a real threat to most families,” says Gott. “At some point Alzheimer’s sufferers may need help eating, moving around, or going to the bathroom. Unless their loved ones are prepared to help them do such things, they need savings or insurance to hire professionals. Our mission is to educate Americans about their options.”

“Eventually,” Gott adds, “we’d like to knock the disease stone dead. In the meantime, we can help people live better lives in spite of it.”

ACSIA Partners LLC — http://www.acsiapartners.com — is one of America’s largest and most experienced long-term care insurance agencies serving all states. The company is also a co-founder and sponsor of the “3in4 Need More” campaign, which encourages Americans to form a long-term care plan.

View More Health and Medical News
"It's simple: The disease has become a leading reason care is needed. It's a real threat to most families," says Denise Gott.

LEGAL NOTICE AND TERMS OF USE: The content of the above press release was provided by the “news source” ACSIA Partners LLC or authorized agency, who is solely responsible for its accuracy. Send2Press® is the originating wire service for this story and content is Copr. © ACSIA Partners LLC with newswire version Copr. © 2017 Send2Press (a service of Neotrope). All trademarks acknowledged. Information is believed accurate, as provided by news source or authorized agency, however is not guaranteed, and you assume all risk for use of any information found herein/hereupon.