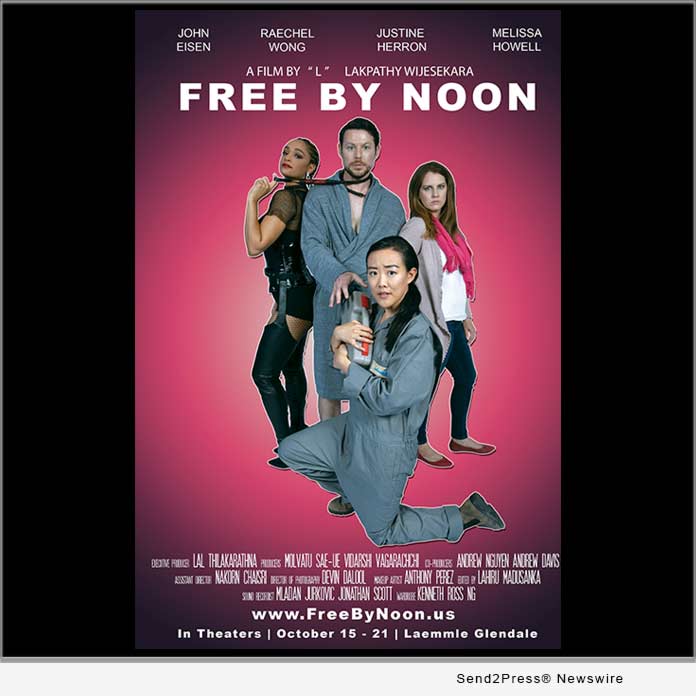 According to UCLA’s Hollywood Diversity Report 2020, only 14.4% of directors of theatrical films represent people of color. Alarmingly, only 3.4% were directors of Asian origin in 2019.

“L” – Lakpathy Wijesekara has Sri Lankan roots, a tiny island on the coast of India. His last cinematic endeavor was a Virtual Reality film from a newborn’s perspective about Child Laundering.

“Free By Noon” has a truly diverse cast and a crew. Not one or two but seven different languages were spoken on the “Free By Noon” set.

“Free By Noon” is about a married man who tries to have some “extra” fun in Las Vegas, where he gets locked up in a very unusual situation. He has to get himself out of this quirky situation to save his marriage before his wife gets home.

“I felt like this was a unique Hollywood Film and a really good human drama done with a small plot,” said Mr. Aruna Gunarathna, Editor of Sarasaviya newspaper, a trade magazine equivalent of Hollywood Reporter / Variety in Sri Lanka.

The film was shot on an Arri Alexa camera with a single Anamorphic lens.

Once the film is screened at the Glendale Laemmle theater from Oct. 15-21, 2021, the filmmakers plan to take it to New York, Texas and Atlanta and screen it in Sri Lanka as well.

Lakpathy Wijesekara is a Los Angeles-based director, producer, cinematographer, and screenwriter, known as L, in the industry, as an abbreviation of his six names of Sri Lankan origin. Lakpathy's affiliation to the Entertainment Arts was visible since his childhood, and was the Sri Lanka's Youngest Film Director. He has regularly acted in children's television shows, directed stage dramas and directed and produced over 300 videos for the his college you tube channel during his high school days at Royal College, Colombo.

LEGAL NOTICE AND TERMS OF USE: The content of the above press release was provided by the “news source” Director Lakpathy Wijesekara or authorized agency, who is solely responsible for its accuracy. Send2Press® is the originating wire service for this story and content is Copr. © Director Lakpathy Wijesekara with newswire version Copr. © 2021 Send2Press (a service of Neotrope). All trademarks acknowledged. Information is believed accurate, as provided by news source or authorized agency, however is not guaranteed, and you assume all risk for use of any information found herein/hereupon.