LOS ANGELES, Calif., June 28, 2022 (SEND2PRESS NEWSWIRE) — Toastmaster Harriet Kamakil Brown, of Los Angeles, California, rose among more than 70 local contestants to win the district-level competition of the Toastmasters International Speech Contest, Toastmasters District 52 announced today. Kamakil Brown advances to the region quarterfinal round of the contest, competing for one of 28 spots in the semifinals, to be held in a hybrid format on Thursday, Aug. 18. From there, eight contestants will advance to the World Championship of Public Speaking®, which takes place Saturday, Aug. 21, in Nashville, Tennessee. 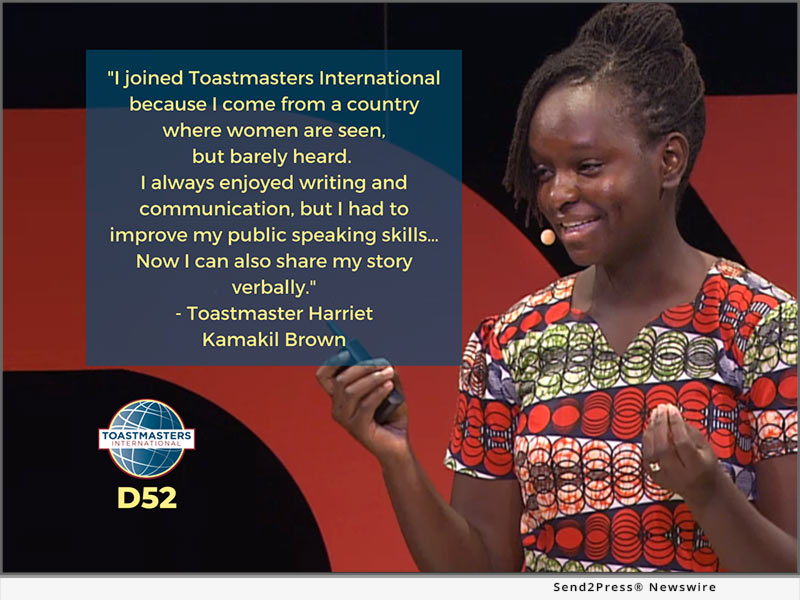 Kamakil Brown, a Prepared Speakers Toastmasters Club member in Glendale, California, surpassed fierce competition to win over the judges with her speech, “This One.” Her presentation touched on the themes of self-improvement, thankfulness, and resilience. When it comes to connecting with an audience, she said, “Take a deep breath, don’t take yourself too seriously, focus on the message you have to deliver and be grateful for the privilege to be able to share it with your audience.”

Kamakil Brown will compete with up to 122 other winners from Districts around the world who advance to the 2022 region quarterfinal round after winning their club, Area, Division and District speech competitions like she did. Their five- to seven-minute speeches were judged on content, delivery, and language.

“I joined Toastmasters International because I come from a country where women are seen, but barely heard,” says Toastmaster Kamakil Brown. “I always enjoyed writing and communication, but I had to improve my public speaking skills… Now I can also share my story verbally.” Kamakil Brown is a Field Representative for the Student and Exchange Visitor Program, a bridge for government organizations that have an interest in information on nonimmigrants whose primary reason for coming to the United States is to be students.

The Toastmasters International Speech Contest began in 1938 and is the world’s largest speech contest, involving 30,000 participants from 149 countries. It culminates with the famous World Championship of Public Speaking held annually at the organization’s International Convention.

To learn more about District 52 please visit: https://www.district52.org/ and http://www.d52.me/MeetUp

ABOUT THE NEWS SOURCE:
Toastmasters District 52

LEGAL NOTICE AND TERMS OF USE: The content of the above press release was provided by the “news source” Toastmasters District 52 or authorized agency, who is solely responsible for its accuracy. Send2Press® is the originating wire service for this story and content is Copr. © Toastmasters District 52 with newswire version Copr. © 2022 Send2Press (a service of Neotrope). All trademarks acknowledged. Information is believed accurate, as provided by news source or authorized agency, however is not guaranteed, and you assume all risk for use of any information found herein/hereupon.