LOS ANGELES, Calif., June 6, 2017 (SEND2PRESS NEWSWIRE) — Christina Villegas and Jeff Mercer, the creative forces behind MercVille Productions, have announced the release of the second season of their popular web based docu-series, “The Pole Dancing Chronicles.” Sponsored and co-produced by Mighty Grip Inc., a leading worldwide sporting goods manufacturer, “The Pole Dancing Chronicles” showcases people and events from within the pole and aerial community. 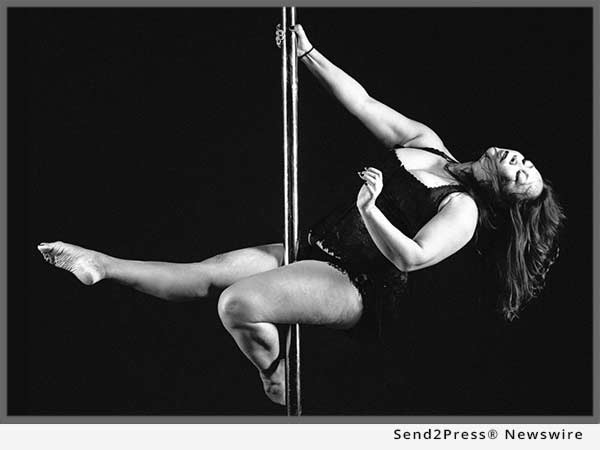 With the growing recognition of pole dance and aerial art as respected fitness regimens, “The Pole Dancing Chronicles,” provides an insider’s peek into the sport and the people behind it, highlighting, in particular, men and women who are defying societal expectations and are excelling within the field.

The second season launched with an episode on 56-year-old pole artist Makeda Smith. A grandmother and entertainment publicist, Smith has garnered international media attention for her poling acumen at her advanced age. The second episode of season two covers “Chronicles” producer Villegas and details her love for the art as well as her intention and motivation to create and produce “The Pole Dancing Chronicles” with her partner Mercer. Episode three, the most recent feature, highlights acclaimed multi-championship pole performance artist, Nadia Sharif, a former engineer turned dancer and instructor.

Former docu-reality producers for network television, Mercer and Villegas formed MercVille Productions in 2013 with a goal to create entertaining, inspiring, and informative stories about everyday people. A pole and burlesque instructor, Villegas also opened her dance studio, Flying Curves Dance Studio in 2013. After teaching pole dancing and empowerment through movement to women on and off for nine years while also working in reality TV, she decided to combine her love and passion for pole with her passion for video storytelling and production.

When Villegas began producing “Goddesses Empowered: The Show,” a live pole and burlesque show, she was inspired by the various tales, trials and tribulations of her students. She felt that the compelling stories of women who had evolved through pole dancing needed a global platform and the idea for “The Pole Dancing Chronicles” was born. Mighty Grip, a wholesale distributor and online sporting goods store, came on board in 2015 and in 2016 the season debuted with eight shows, which were released online monthly.

“We have met so many wonderful and talented people that have opened their arms and hearts to us,” expresses Villegas.

“Pole and aerial is an emerging art and is often misunderstood,” adds Mercer. “Our series not only introduces a larger audience to the sport, dispelling myths and concerns, but also serves as a tool of empowerment and motivation within the pole and aerial community.”

Mighty Grip, Inc. is widely recognized for their popular grip aids for athletes. Stephanie Housel, President and COO of Mighty Grip, Inc., initiated launching the brand into the pole world, universalizing the use of the product among pole and aerial enthusiasts internationally. “We are honored to offer ‘The Pole Dancing Chronicles’ as an important vehicle for sharing personal stories about the world of pole and aerial dance,” cites Housel. “As one of the leading providers of grip aids, gloves, and protective gear for pole and aerial artists, ‘The Pole Dancing Chronicles’ allows us to stay in touch and in tune with our client base on a personal level. Our customers are real people with real stories, and we are excited to share them with the world.”

Season two of “The Pole Dancing Chronicles” consists of 10 episodes released monthly online through to 2018.

Catch episode two of “The Pole Dancing Chronicles” on Christina Villegas at https://www.youtube.com/watch?v=OQIWoTDoA6s and watch the latest episode with Nadia Sharif at https://youtu.be/Pp5hmM-tRt8 .

For more information about Mighty Grip Inc. go to http://mightygrip.com/.

View More Television News
"Pole and aerial is an emerging art and is often misunderstood," says Jeff Mercer. "Our series not only introduces a larger audience to the sport, dispelling myths and concerns, but also serves as a tool of empowerment and motivation within the pole and aerial community."

ABOUT THE NEWS SOURCE:
MercVille Productions

MercVille Productions was founded by reality/documentary television producers Jeff Mercer and Christina Villegas. Jeff and Christina have each spent over a decade producing shows for major cable networks and are now utilizing their production and storytelling skills with MercVille. We offer a variety of video production services from corporate and promotional videos, to live events and personal documentaries highlighting life's memorable and unique moments.

LEGAL NOTICE AND TERMS OF USE: The content of the above press release was provided by the “news source” MercVille Productions or authorized agency, who is solely responsible for its accuracy. Send2Press® is the originating wire service for this story and content is Copr. © MercVille Productions with newswire version Copr. © 2017 Send2Press (a service of Neotrope). All trademarks acknowledged. Information is believed accurate, as provided by news source or authorized agency, however is not guaranteed, and you assume all risk for use of any information found herein/hereupon.