NEW YORK, N.Y., April 14, 2020 (SEND2PRESS NEWSWIRE) — According to a new study by Thintri, Inc., systems based on millimeter wave technology are creating markets that will soon reach billion-dollar levels. The report, “Millimeter Waves: Emerging Markets,” analyzes markets in telecommunications, imaging, consumer & automotive, defense & security and other sectors and finds that several are undergoing rapid growth, while others are in the early stages of market entry. 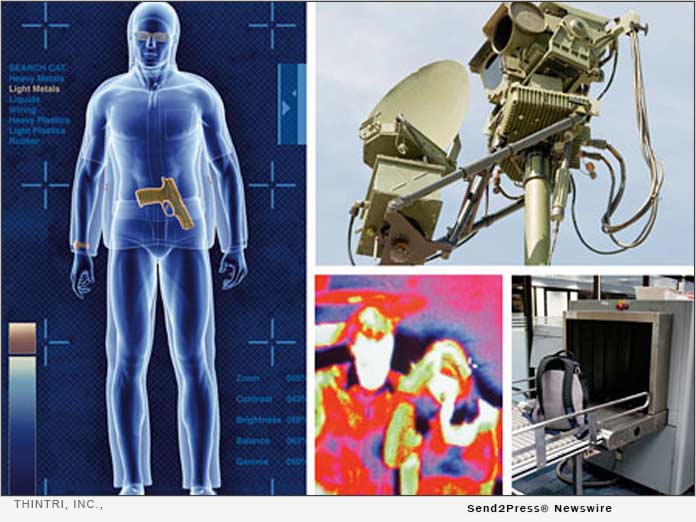 A few are about to witness the entry of game-changing technologies, products and services that, combined with a more open regulatory environment, will transform markets that up to now have been modest.

Millimeter wave (MMW) radiation, that portion of the electromagnetic spectrum generally defined as 20 GHz to 300 GHz, has gained commercial traction in the past decade or so.

Today, MMW imaging is established in airport and other checkpoint security applications, and markets are rapidly growing in inventory control and loss prevention, where systems can quickly scan employees leaving a manufacturing facility to prevent theft. Imaging systems already installed at malls, hidden behind walls, can automatically track suspicious persons who may have concealed weapons or bombs.

Technological evolution is bringing about imaging systems that are more capable, less costly, smaller, lighter and more portable, and take less training to use. This evolution is about to dramatically reduce the cost of such imaging systems, allowing their adoption in a much broader range of venues that will include courthouses, concerts, stadiums, schools, dance clubs and many, many others.

MMW systems are radically transforming telecommunications as well. E-band links are quickly capturing markets in backhaul, where they can be deployed quickly and at a small fraction of the cost of deploying optical fiber, but offering near-fiber data rates.

Millimeter wave links combined with small cell networks may be the only viable solution to the bandwidth challenges facing today’s telecom industry as it establishes next-generation 5G networks. 4G networks already approached the theoretical limit on how much data can be squeezed into a given band. Experts predict that in just a few years, wireless data transfer volumes will grow by more than 1,000, with demand for wireless data transfer rates at 10 to 100 times faster than is practical today.

The result is a Wild West scenario where a large number of players, large and small, compete to offer consumers and businesses access at up to gigabit data rates at low cost. At that time the distinction between fixed and mobile Internet access will largely disappear, as consumers demand broadband access anytime, anywhere, on any device.

The Thintri market study, “Millimeter Waves: Emerging Markets, makes use of extensive, in-depth interviews with industry executives, business and market development managers along with government and academic researchers. The report provides a survey of the current state of the art in millimeter wave technology, an assessment of potential applications in terms of their commercial viability, discussion of market development and forecasts for individual markets from 2020 to 2025.

Founded in 1996, Thintri, Inc. (www.thintri.com), is a full-service consulting firm, based in New York and directed by J. Scott Moore, Ph.D.

LEGAL NOTICE AND TERMS OF USE: The content of the above press release was provided by the “news source” Thintri, Inc. or authorized agency, who is solely responsible for its accuracy. Send2Press® is the originating wire service for this story and content is Copr. © Thintri, Inc. with newswire version Copr. © 2020 Send2Press (a service of Neotrope). All trademarks acknowledged. Information is believed accurate, as provided by news source or authorized agency, however is not guaranteed, and you assume all risk for use of any information found herein/hereupon.