DIXON, Calif., July 17, 2017 (SEND2PRESS NEWSWIRE) — Moller International is offering to sell its original M400 Skycar® via public auction as a centerpiece of any car or aircraft collection in a public or private museum. It is the world’s first true VTOL (vertical takeoff and landing) “Flying Car” to be demonstrated. It is very prevalent on Google and YouTube under M400 Skycar. 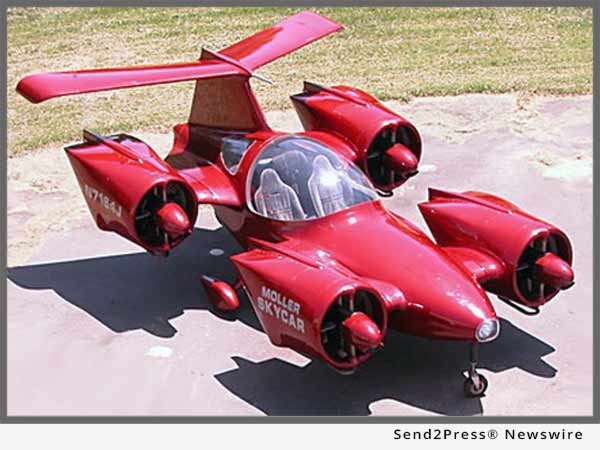 The M400 Skycar is a true museum piece, developed over many years and first flown in 2001 at the company’s shareholder meeting. It has since flown (under a restricted environment) many times. This vehicle was featured on the covers Popular Science, Popular Mechanics, and the topic of countless news articles and broadcasts including 60 Minutes, ABC, Bloomberg, CNN, and Discovery Channel.

A collector who buys the M400 Skycar® will receive it in its original 2001 flight form and condition, complete with eight Rotapower engines that produced over than 720 hp allowing the M400 Skycar® to take off and land vertically.

It should be noted, however, in this original form, it was not FAA approved and a condition of this sale is that it cannot be flown. Nonetheless, this vehicle can be the centerpiece of any car or aircraft collection in a public or private museum. Reassembling it back to its original state will take some time.

Over the last 30 years, Moller International has spent more than $150 million developing the engine and airframe technology to make this prototype possible. A modified version of the original M400 Skycar® was previously offered for sale, but failed to meet the reserve. The M400 prototype has now been superseded by the hybrid Skycar® 400 configuration.

ABOUT THE NEWS SOURCE:
Moller International

Moller International was founded in 1983 as a spin-off of Moller Corporation to continue to design, develop, manufacture and market personal vertical takeoff and landing aircraft (VTOL). The company has developed and integrated the disparate technologies required for small, powered-lift VTOL aircraft. These include electronic stabilization and control systems, efficient ducted fan designs, thrust vectoring mechanisms and aerodynamically stable composite airframe structures. The single most significant spin-off technology is the Rotapower engine, a Wankel rotary engine. This engine is now produced and marketed by Freedom Motors.

LEGAL NOTICE AND TERMS OF USE: The content of the above press release was provided by the “news source” Moller International or authorized agency, who is solely responsible for its accuracy. Send2Press® is the originating wire service for this story and content is Copr. © Moller International with newswire version Copr. © 2017 Send2Press (a service of Neotrope). All trademarks acknowledged. Information is believed accurate, as provided by news source or authorized agency, however is not guaranteed, and you assume all risk for use of any information found herein/hereupon.