NASHVILLE, Tenn., July 28, 2020 (SEND2PRESS NEWSWIRE) — Nashville singer and songwriter Brina Kay released the music video for her single “Heat of the Moment” at midnight on July 10, 2020. The video was filmed last year in the city of Chicago and was directed by Joshua Lockhart of J. Lockhart media. 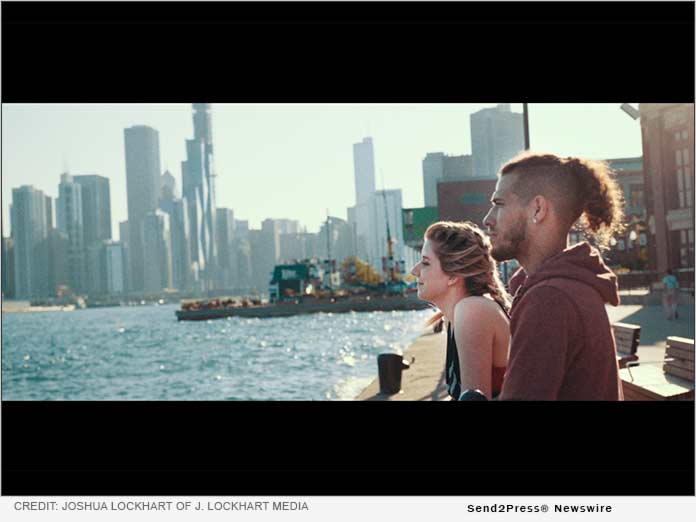 Originally from Schaumburg Illinois (a northwest suburb of Chicago), Kay says her song’s production and lyrics were inspired by the way Chicagoans embrace the fleeting summer months. It then evolved into a story about two friends taking a step towards romance.

“The original idea was just about the weather, the literal heat of the literal moment,” said Kay. “The winters here are so brutal, that when summer finally does roll around Chicagoans make the most out of every minute. We took that idea of longing for summer and used it as a metaphor for two people longing to get out of the friend zone.”

The video features a variety of recognizable locations around the city, including Millennium Park, Navy Pier, Wrigleyville, and the Chicago Riverwalk. It follows Kay and her love interest (played by Andrew Haney) exploring the city together. As day turns to night, their friendship becomes more and more flirty, and both appear to be trying to muster up the courage to make a move.

“These characters have both been wanting this for so long,” said Kay, “but the timing’s never been right before. It takes something special for something like that to happen, and nothing feels more magical than summer in Chicago.”

The music video can be viewed on YouTube, Apple Music, Tidal, Amazon, and other platforms.

Co-written and produced by Mike Anderson, a Nashville-based composer and producer, “Heat of the Moment” is currently available on most streaming services.

For more information on releases, updates and performances, visit https://www.brinakaymusic.com/

View More Music and Recording News
"These characters have both been wanting this for so long," said Kay, "but the timing's never been right before. It takes something special for something like that to happen, and nothing feels more magical than summer in Chicago."

ABOUT THE NEWS SOURCE:
Brina Kay

Thought-provoking. Bold. Theatrical. These are just some of the many ways to describe country-pop starlet and songwriter Brina Kay. At her core, Brina is a storyteller. Her lyricism easily lends itself to country music, but pop elements in production bring her stories to life in innovative and unexpected ways. Within a year of her move to Nashville TN, Brina released four new singles, some of which were featured on iHeart Country Station Big 95.5 Chicago's "Backyard Country" program. All four of her most recent singles charted on She Wolf Radio.

LEGAL NOTICE AND TERMS OF USE: The content of the above press release was provided by the “news source” Brina Kay or authorized agency, who is solely responsible for its accuracy. Send2Press® is the originating wire service for this story and content is Copr. © Brina Kay with newswire version Copr. © 2020 Send2Press (a service of Neotrope). All trademarks acknowledged. Information is believed accurate, as provided by news source or authorized agency, however is not guaranteed, and you assume all risk for use of any information found herein/hereupon.