BROOKLYN, N.Y., Jan. 8, 2019 (SEND2PRESS NEWSWIRE) — From an initial field of thousands, some 445 girls and young women from elementary-school-through-college and beyond, have persevered through four preliminary meets at Pratt Institute and scored points to earn a spot in the semi-finals of the nation’s largest track series for women, the 45th anniversary Colgate Women’s Games Track and Field Series (Jan. 5-7, 2019). 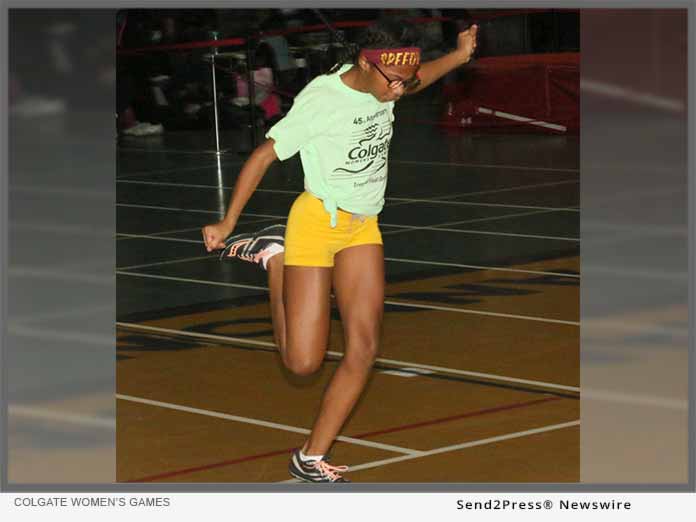 PHOTO CAPTION: Brooklyn, NY (Pratt Institute – 1/6) Philadelphia’s Amirah Nesmith, last year’s 55 meters champion, won both the 55 meters in 8:01 and the 200 meters in 8.26, for an undefeated season in both Elementary B division events, heading to the semi-finals of the 45th anniversary Colgate Women’s Games, which will be held at Pratt Institute on January 19, 2019.

From all over the East Coast, as far as Georgia to Massachusetts, these gifted young competitors include some of the nation’s top-ranked athletes in their events and divisions performing at the peak of their talent, including an Elementary B high jump record by a fifth grader from Delaware, and dozens of newly-crowned Junior Olympians setting personal records throughout the series. All point-scorers are eligible to compete in the semi-finals on January 19, 2019 at Pratt.

In the High School division on Friday, Brooklyn’s Brianna White placed first in the 55 meters in 7.39 just ahead of Rori Lowe of the Bronx, who placed second in 7.41. White has been running her personal best this indoor season at Pratt and Rowe leads White by only three points heading into the semi-finals. White also won the 200 meters in 25.61 ahead of Junior Olympic Champion Brianna Brown of the Bronx, who placed second in 25.72, creating a 48-point tie.

In a fiercely competitive 55 meter-hurdles race, Phoebe Myers of Queens finished first in 8.45, just ahead of Anjoli Mathew of Brookline, MA in 8.48. Junior Olympic Champion and last year’s Mid School hurdles champion Peyton Rollins of Cambridge, MA finished third in 8.51. Rollins and Mathew continue to make the drive from the Boston area. Kaitlyn Cepeda of Manhattan and Adia Palmer of Brooklyn both remained undefeated; Cepeda won the 400 meters in 59.99, and Palmer won the 800 meters in 2:19.58. Isabel Stronski of Rye, NY won the 1500 meters in 4:58.36.

“Our goal is to provide a fun, friendly, yet competitive environment where young participants can discover their talent and harness their skills in track and field, while at the same time fostering the importance of pursuit of education. The experience of competing in a series affords participants the opportunity to grow from week to week, building self-esteem and a sense of personal achievement that will surely have a positive impact on their lives,” Toussaint said. “We encourage all participants, especially those of you who did not reach this year’s semi-finals, to continue to persevere both on and off the field, and we hope you will join us again next year.”

Saturday in the Mid School division, national sprint sensation and four-time Colgate Women’s Games’ record-holder Avery Lewis of West Chester, PA made it a perfect undefeated season. Lewis won the 55 meters in 7.35, and the 200M in 25.05. The Junior Olympic champion also has amassed an incredible five dozen (60) first-place wins in a wide variety of events at major East Coast and regional track and field events. Ashey Fulton of Elmont, NY deserves mention for consecutively placing second; this week in 7.65. Fulton is also a Junior Olympic Champion, who achieved her personal record time 7.44 the first meet of the series.

In the Elementary A division, Lauren Broadus of Philadelphia had a phenomenal day with a double win, placing first in the 200 meters in 32.25 and the 400 meters in 1:11.35, both her best performances of the series. Khloe Khan of Brooklyn finished undefeated in the 55 meters with a 9.09, and Aisha Wajid of the Bronx, one of the youngest Junior Olympic champions, won the 800 meters in 2:44.17. Additional outstanding performances and results for all divisions are available at http://colgategames.com/results. 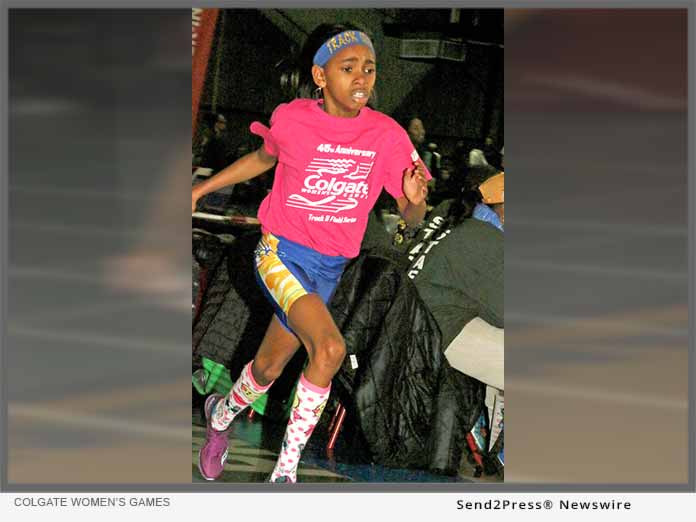 PHOTO CAPTION: Brooklyn, NY (Pratt Institute – 1/6) Lauren Broadus of Philadelphia had a phenomenal day with a double win, placing first in the 200 meters in 32.25 and the 400 meters in 1:11.35, both her best performances of the series at the final preliminary meet of the 45th anniversary Colgate Women’s Games held at Pratt Institute, Brooklyn, NY this weekend.

45th Anniversary honors dozens of seniors, and longest competing athletes.
The Colgate Women’s Games isn’t just the nation’s largest series of its kind, but also the longest-running corporate-sponsored event for women’s athletics. Many athletes have participated for decades, and some have even participated every season from Elementary A all the way through 30’s plus divisions!

PHOTO CAPTION: Brooklyn, NY (Pratt Institute – 1/6) Left to Right: Olive Smart, 45 of Brooklyn has competed in 35 Colgate Women’s Games and heads to the semi-finals in first place in the 30’s plus 1500 meters. Lisa Edwards, 40 of the Bronx has competed every year since elementary school and heads to the semi-finals in second place in the 30’s plus 200 meters. Michelle Nero, 66 of Queens ran in the very first and second Colgate Women’s Games in 1974, 1975, and today competed in the 45th anniversary college /open division 800 meters. Bob Johnson coached Michelle and has been on staff for 45 years as an official. He is 80 years old and still teaching at York College. Jennifer Pinto, 70 of Brooklyn competed this year for her in the 200 meters, her forty-second appearance.

Semi-finalists will compete on Saturday, January 19, 2019 at Pratt Institute to determine finalists who will compete at the New Balance Track and Field Center at the Armory, NYC Saturday, February 2, 2019, where trophies and educational grants-in-aid from Colgate-Palmolive Company are awarded to top place finishers in each grade division.

Coaches, recruiters, athletes and fans can follow scores each week at http://www.colgategames.com/. Tickets to the Armory finals are free by request.

View More Track and Field News
"Our goal is to provide a fun, friendly, yet competitive environment where young participants can discover their talent and harness their skills in track and field, while at the same time fostering the importance of pursuit of education," said Meet Director Cheryl Toussaint.