DENVER, Colo., June 21, 2016 (SEND2PRESS NEWSWIRE) — Imagine what it would be like to be the first person to perform at the world famous Red Rocks outdoor theatre. Dr. LeAnna DeAngelo did. She has written a novel, “Maestro Satriano” (ISBN: 978-0692716632), based on a true story about her great-great uncle, Pietro Satriano. He and his band were the first to perform at Red Rocks on May 31, 1906. 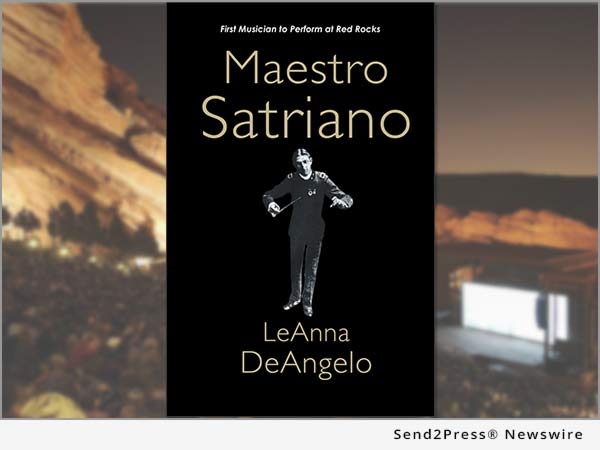 Pietro Satriano was a musical child prodigy and a musician to royalty prior to moving to America in 1885. Pietro and his father, Antonio, were cornet virtuosos in Italy. Antonio was motivated to come to America to make sure that his son attained an international reputation. In America, they were revered for their musical talents but despised by some because of prejudice and discrimination against Italian people.

DeAngelo tells the story sensitively and with humor; it is a unique tale about remarkable people.

“It is well known that he and his band were the first to perform at Red Rocks, and he is often cited in the media, ‘the first official performance was on May 31, 1906, when Pietro Satriano and his 25-piece band…,’” says DeAngelo.

One of the many reasons DeAngelo decided to write the book is to give the media more information: “He was a fascinating person. He was a child prodigy. He and his father were both cornet virtuosos in Italy. Pietro had an international reputation and had been a musician to King Alphonso of Spain prior to coming to America in 1885 and he attended several music conservatories and was faculty at the Royal Academy of Music in Milan at a very young age.”

DeAngelo integrated information from about 50 articles that appeared about him in newspapers, journals and books between approximately 1899-1922. She also relied on oral and written family history.

“The articles are fascinating, and if journalists still wrote that way, I bet people would still read the newspaper.”

Some of the more interesting articles accentuate his unusual body movements, referring to the way he conducted the band as “acrobatic feats.” There are other remarkable headlines from newspapers, such as “23,000 people came to the park to see Satriano.” Another one of DeAngelo’s favorite quotes that appeared in the paper was, “The eccentricities of genius, the peculiarities of celebrities and the stamp of originality have found a forceful example in the Denver band master.”

In the novel, DeAngelo weaves a tale of the passions of Satriano. “I believe he was a passionate man, in both his personal and professional life.” He divorced twice in the late 1800s, and then had a third marriage that lasted many years.

The story moves quickly, “It is ultimately an immigrant story about traveling to a new world, and prejudice was pervasive among Italians. So, paradoxically, they were revered for their talent but scorned because they were Italians. He liked ragtime music, which was popular then. He was criticized by the public and the media for performing ragtime and not sticking with the classics or religious music. He was quoted in the paper as saying that classical music means ‘thinking’ and one must grasp what the composer was trying to convey, and sometimes even people who like classical music want to hear something different.”

DeAngelo laments Satriano has not been inducted into the Red Rocks Hall of Fame or the Colorado Hall of Fame. She was also motivated to write the book to educate people about history, “If we do not tell stories we lose them, and research shows that people who know a lot about their family history are more resilient. It enables people to feel like they are part of something larger than themselves.”

“Maestro Satriano” is now available through Amazon in print or as a Kindle book, and it can be ordered through any bookstore.

About the Author:
LeAnna DeAngelo is a licensed psychologist in Colorado, and this is her first novel.

For more information on the book, see https://www.facebook.com/maestro.satriano or on Amazon at https://amzn.com/0692716637.

View More Books and Publishing News
"It is ultimately an immigrant story about traveling to a new world, and prejudice was pervasive among Italians. So, paradoxically, they were revered for their talent but scorned because they were Italians," says DeAngelo.

ABOUT THE NEWS SOURCE:
LeAnna DeAngelo

LeAnna DeAngelo is a licensed psychologist in Colorado, and her first novel, "Maestro Satriano" (ISBN: 978-0692716632), inspired by her great-great uncle Pietro Satriano, the first musician to play Denver's Red Rocks, is available at Amazon as well as most book sellers.

LEGAL NOTICE AND TERMS OF USE: The content of the above press release was provided by the “news source” LeAnna DeAngelo or authorized agency, who is solely responsible for its accuracy. Send2Press® is the originating wire service for this story and content is Copr. © LeAnna DeAngelo with newswire version Copr. © 2016 Send2Press (a service of Neotrope). All trademarks acknowledged. Information is believed accurate, as provided by news source or authorized agency, however is not guaranteed, and you assume all risk for use of any information found herein/hereupon.