SACRAMENTO, Calif., April 29, 2020 (SEND2PRESS NEWSWIRE) – AUTOACCIDENT.COM – According to the AAA Foundation for Traffic safety, a hit-and run-accident occurs about 60 times per minute. 36% of hit-and-run accidents in Sacramento between 2017-2018 have resulted in injury or death. 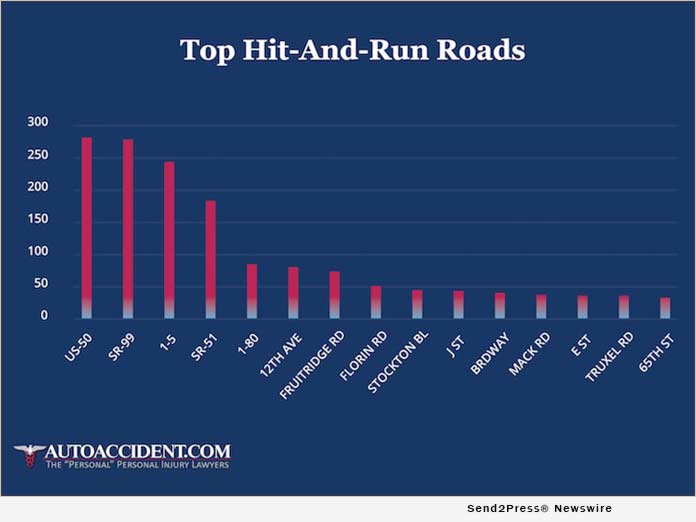 In an effort to raise awareness and reduce the occurrence of hit-and-run accidents in Sacramento, AUTOACCIDENT.COM has commissioned a study to compile and analyze hit and run data in Sacramento. Data was compiled using CHP’s I-SWITRS records system.

The findings are reported through a series of charts and graphs that outline the most prevalent locations for hit-and-run accidents throughout the city. The charts are accompanied by a detailed analysis of the findings.

The data shows that the roads with the highest rate of hit-and-run accidents include:

In addition to the data compilation, charts and analysis AUTOACCIDENT.COM also provides an overview of the legal responsibilities of drivers after an accident occurs.

The complete study details and interactive map are available at: https://www.autoaccident.com/hit-and-run-study.html.

AUTOACCIDENT.COM is a Sacramento based law firm that primarily assists injured victims with personal injury claims. They provide free consultations as well as virtual legal services.

ABOUT THE NEWS SOURCE:
AutoAccident.com

AUTOACCIDENT.COM is a Sacramento based law firm which focuses exclusively on personal injury law. It was established in 1982. Our primary area of practice is California Personal Injury Law, which comprises more than 95% of our practice. We can also help you with medical malpractice cases and Federal Employers Liability Act cases for injured railroad workers. The remaining portion of the practice includes General Consumer Law.

LEGAL NOTICE AND TERMS OF USE: The content of the above press release was provided by the “news source” AutoAccident.com or authorized agency, who is solely responsible for its accuracy. Send2Press® is the originating wire service for this story and content is Copr. © AutoAccident.com with newswire version Copr. © 2020 Send2Press (a service of Neotrope). All trademarks acknowledged. Information is believed accurate, as provided by news source or authorized agency, however is not guaranteed, and you assume all risk for use of any information found herein/hereupon.