PROVO, UTAH, Jan. 29, 2021 (SEND2PRESS NEWSWIRE) — PhoneSoap proudly announces a 99.99% reduction of SARS-CoV-2 with its ExpressPro disinfection technology. According to a recent study conducted by the University of Tennessee Health Science Center, the PhoneSoap ExpressPro, a rapid UV disinfection device for cell phones, tablets, and other hard-to-clean hand-held items, resulted in a 99.99% reduction of SARS-CoV-2 during the 30-second cycle time. 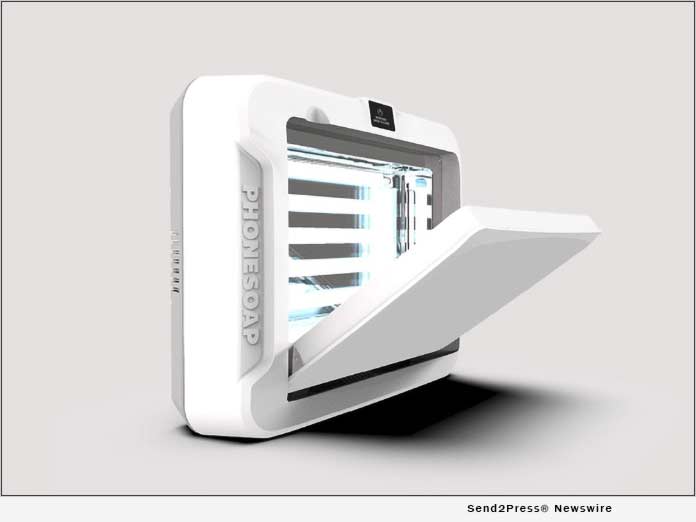 PhoneSoap ExpressPro is a rapid UV disinfection device for busy work environments utilizing mobile devices such as cell phones, tablets, and other hard-to-clean hand-held items. The rapid 30-second, 360-degree  disinfection that is the hallmark of the PhoneSoap brand, makes it an invaluable tool for many industries including healthcare, hospitality, education, and travel.

“We’re extremely pleased with the outcome of this third-party SARS-CoV-2 study and recognize how critical it is to break the chain of infection,” stated Wesley LaPorte, Co-Founder and CEO of PhoneSoap. “Whatever your hands touch, your hand-held devices collect and that includes  this deadly virus which is known to survive for extended periods of time on common surfaces. We refer to these mobile devices as the third hand you never wash, but PhoneSoap’s ExpressPro provides an easy and fast way to disinfect them and help stop the spread of infection.”

Dan Barnes, PhoneSoap Co-founder and President, expressed “Dramatic reductions in infection-causing microorganisms such as the 99.99% with the SARS-Co-V-2 virus along with a 99.999% reduction of MRSA and 99.9% of C. difficile, allow our healthcare, retail and other customers to mitigate the risk of transmission in their respective businesses. We’re proud that we are continuing in our mission of making the world a healthier place.”

PhoneSoap was invented by cousins Dan Barnes and Wes LaPorte after they watched a TV report that claimed cell phones were contaminated by fecal matter. They conducted their own tests, their results proved that the average phone is 18 times dirtier than a public bathroom. After appearing on season six of Shark Tank in 2015 and making a deal with QVC’s Lori Greiner, PhoneSoap took off. In addition to ExpressPro, the company has since developed new versions of its classic PhoneSoap, including Wireless and HomeSoap versions. PhoneSoap’s focus continues to be making the world a healthier place.

View More Electronics News
"We're extremely pleased with the outcome of this third-party SARS-CoV-2 study and recognize how critical it is to break the chain of infection," stated Wesley LaPorte, Co-Founder and CEO of PhoneSoap.

ABOUT THE NEWS SOURCE:
PhoneSoap

PhoneSoap was invented by cousins Dan Barnes and Wes LaPorte after recognizing the need to decontaminate hand-held devices. They conducted their own tests and results proved that the average phone is 18 times dirtier than a public bathroom. PhoneSoap has sold over two million consumer units and continues to grow at a rapid speed. In the past three years, additional models have been released as well as newer devices including PhoneSoap Go, HomeSoap and screen-cleaning accessories like the PhoneSoap Shine and Microfiber Pad 3-pack. PhoneSoap's focus continues to be making the world a healthier place.

LEGAL NOTICE AND TERMS OF USE: The content of the above press release was provided by the “news source” PhoneSoap or authorized agency, who is solely responsible for its accuracy. Send2Press® is the originating wire service for this story and content is Copr. © PhoneSoap with newswire version Copr. © 2021 Send2Press (a service of Neotrope). All trademarks acknowledged. Information is believed accurate, as provided by news source or authorized agency, however is not guaranteed, and you assume all risk for use of any information found herein/hereupon.