AUSTIN, Texas, Oct. 11, 2017 (SEND2PRESS NEWSWIRE) — Wetwire Robotics today announced they are launching the first in a new line of smart toys geared towards digital assistants like Amazon’s Alexa devices. The first model is called Lexa Bear and is a talking teddy bear that is designed to hold an Echo Dot or connect with any Bluetooth device like a mobile phone or tablet. Wetwire Robotics has designed the bear to synchronize its mouth movements in real time to the human voice. It is not limited to pre-recorded audio and can speak with about any audio it’s connected to. 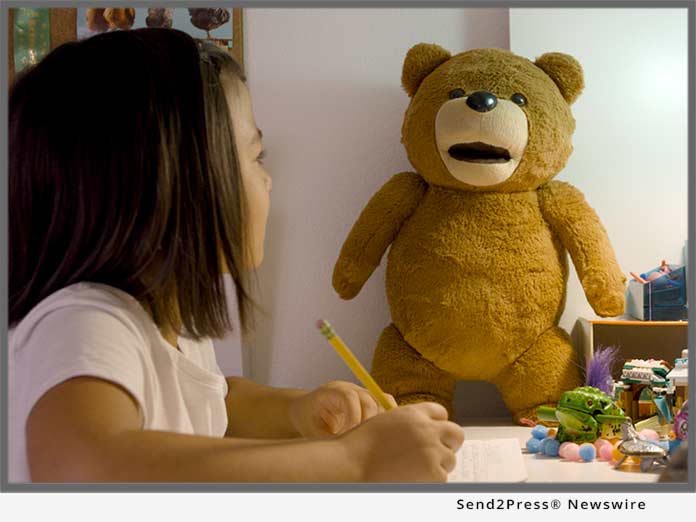 A 2017 study by Accenture recently found that 46 percent of U.S. consumers are using voice-enabled digital assistants. As digital assistants like Amazon’s Alexa and Google Assistant are growing in popularity and abilities, many new and better ways are being developed to interface with the technology.

“It was really exciting when we showed the first talking bears speaking for Alexa to kids and even adults,” said Victor Wong, Creator and CEO, Wetwire Robotics. “We saw how much more engaged and alive the technology can be.”

Wetwire Robotics goals are to humanize access to digital assistants and AI technology into forms that people can relate to and embrace in their daily lives. Realizing technology is constantly growing and improving, Wetwire began working on Lexa Bear as an interface. Since it is not hard coded with programmed sounds and activities, but can respond in real time, Lexa Bear can continue to grow in its abilities.

“We realized early on that Lexa Bear had to be able to not only react to any audio it was connected to but it also had to focus its mouth response to the human voice,” said Travis Redding, lead developer and President, Wetwire Robotics. “It was really challenging to get Lexa to be able to sing mostly the vocals and not react to the music it was hearing. Now Lexa Bear has a speaking voice and can sing to music too.”

Lexa Bear™ already has all of the skills of the Echo Dot it’s paired with such as telling jokes, stories, trivia, games, teaching, singing, and solving problems. When paired with a Bluetooth device, Lexa Bear can talk using any audio producing app. As skills and apps are added every day from around the world, people and families are integrating digital assistants into their daily lives and can add those abilities to Lexa Bear as they develop over time.

Wetwire Robotics will be launching a Kickstarter campaign October 23, 2017.

MULTIMEDIA:
*PHOTO for Media: Send2Press.com/300dpi/17-1011s2p-lexa-bear-300dpi.jpg
*Photo Caption: Wetwire Robotics Lexa Bear, a talking teddy bear that is designed to hold an Echo Dot or connect with a Bluetooth device.

View More Product Launches News
"It was really exciting when we showed the first talking bears speaking for Alexa to kids and even adults," said Victor Wong, Creator and CEO, Wetwire Robotics. "We saw how much more engaged and alive the technology can be."

LEGAL NOTICE AND TERMS OF USE: The content of the above press release was provided by the “news source” Wetwire Robotics, Inc. or authorized agency, who is solely responsible for its accuracy. Send2Press® is the originating wire service for this story and content is Copr. © Wetwire Robotics, Inc. with newswire version Copr. © 2017 Send2Press (a service of Neotrope). All trademarks acknowledged. Information is believed accurate, as provided by news source or authorized agency, however is not guaranteed, and you assume all risk for use of any information found herein/hereupon.