OKLAHOMA CITY, Okla., Aug. 2, 2017 (SEND2PRESS NEWSWIRE) –- K.J. Blocker has created an alternative universe, like no other can, in his newly-released book, “Treasure of the Magical Mine Moppets” (ISBN: 978-0999150740). Published by Mindstir Media, the book’s motive is to foster kindness and understanding. 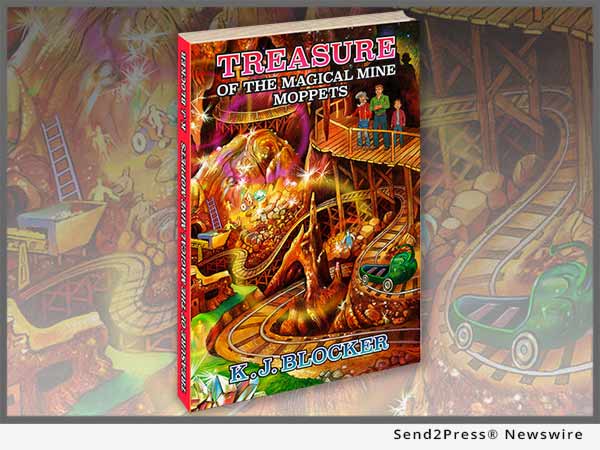 “Enter a magical world where corn grows as high as the clouds and salt can be worth more than gold,” Blocker says.

While this fantasy drama is written for young adult audiences, it’s really a story that everyone can enjoy and take something away.

The story centers around three generations – Jimmy Powers, a nine-year-old boy, who has unsuccessfully devoted his life trying to be noticed by his father, Tom, and Tom’s father, Pappy, who has suddenly appeared after being absent for most of Tom’s life. How will they all learn to connect?

Well, the author has created a world where a mile beneath the earth live wondrous, iridescent little creatures, happily working and playing. However, the world above is not so magical. Here lurks the evil, Mr. Withers, a greedy banker, who wants to destroy all Tom has worked for. And, if they don’t find a way to defeat him, Tom’s family will lose everything. Together, they will learn that family and love are the only things that can destroy evil.

In the U.S. Review of Books, an organization that connects authors with professional book reviewers, one reviewer stated, “There’s a very Disney-like feel to this opening chapter that immediately drops a hierarchy of relatable characters into an environment that is beyond ordinary.”

Readers are sure to discover magic and adventure in moppet land. The book is available from major retailers such as Amazon and Barnes & Noble.

For more information and to watch a promotional video, visit: http://www.kjblocker.com/.

About the Author:
K.J. Blocker is president of JAF Industries, an entertainment products company. He is an author, an inventor, an artist and an entrepreneur. This is his first book in what he plans to be a trilogy. His hope is to deliver a message that brings home the importance of love, acceptance and forgiveness. He lives in Oklahoma City with his wife and their four children.

View More Books and Publishing News
"Enter a magical world where corn grows as high as the clouds and salt can be worth more than gold," Blocker says.

ABOUT THE NEWS SOURCE:
K.J. Blocker

K.J. Blocker was born in 1963 in Oklahoma City, Oklahoma. He has spent much of his life trying new things. When he was a boy, he made God-eyes and sold them to make money. Later he began to write songs. He continued in his entrepreneurial spirit by creating The Original Cheesecake Sundae and selling it at fairs and festivals. Not quite finished creating, he founded and co-invented a vent cap for PVC pipes with Tammy Brown and Mark Temple. He created characters based on the cap called Fit the Wonder Cap and Pipey the Pipe. He never forgot his writing and one day he began to write a song and he just kept on writing. The song turned into a book. K.J. says that his journey over the past three years has taught him just how fragile love is and how important family is.

LEGAL NOTICE AND TERMS OF USE: The content of the above press release was provided by the “news source” K.J. Blocker or authorized agency, who is solely responsible for its accuracy. Send2Press® is the originating wire service for this story and content is Copr. © K.J. Blocker with newswire version Copr. © 2017 Send2Press (a service of Neotrope). All trademarks acknowledged. Information is believed accurate, as provided by news source or authorized agency, however is not guaranteed, and you assume all risk for use of any information found herein/hereupon.