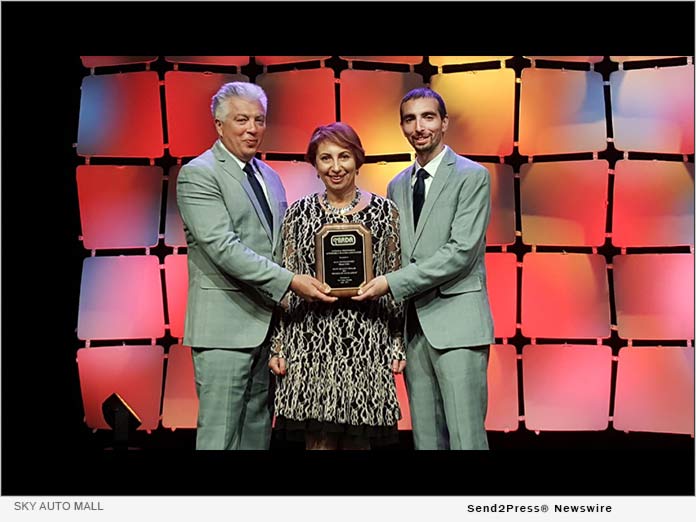 Alex Tovstanovsky and his family are currently the owners of Prestige Motor Works located in Naperville Illinois which over the years has grown from a $1,500 investment into a very successful family business. The Tovstanovsky’s used car operation in Illinois has been the recipient of multiple industry prestigious awards including the coveted Illinois Independent Dealer of the Year Award, Carfax Top Rated Dealer, #1 Used Car Dealership in Naperville, as well as many others.

Declaring the dealership’s motto “Honesty is not expensive, it’s PRICELESS” could very well be the impetus behind these coveted honors. In addition, the Better Business Bureau has given this family run dealership a spectacular five-star, A+ rating.

Having overcome numerous hurdles, Tovstanovsky, an immigrant to the United States in 1994, started out with a minimal amount of cash, along with very little knowledge of the English language, yet his entrepreneurial drive led him to start a small, fledgling car dealership. After devoutly attending National Independent Automobile Dealers Association (NIADA) conferences, since 2009, and learning the ins and outs of the business, Tovstanovsky has been able to transform his small-scale business into a booming 2-acre site on a main arterial road in Naperville.

“Owning and operating a new car franchise dealership representing 5 of our country’s top automakers is a dream come true,” remarked Alex Tovstanovsky recently. He continued, “My family brought me to the United States when I was just 7 years old to escape the oppressive communist regime of the Soviet Union, at the time we had barely $1000 in our pockets and the audacity to work hard, dream big, and strive to be a part of Americas exceptionalism. With the acquisition of these two new dealerships, we will put the Center Point location on a path to growth and success. We plan to retain all the existing staff, many of which have been working at this dealership for 10+ years. Additionally, we plan to grow the dealership by hiring additional technicians, salespeople, and service staff so that we can keep up with current demand and continue growing the dealership operations. We have a phenomenal staff, an incredible service department, and we are located just 15 minutes’ drive North of Cedar Rapids. I am excited and looking forward to serving. We are citizens first, business owners second.”

Tovstanovsky practices what he preaches. He and his family continue to donate thousands of dollars to various charities while volunteering with non-profit organizations in the local community such as SCORE (Counselors to America’s Small Business) while fighting against anti-business and anti-free-enterprise regulations. In 2003 Alex became the Auxiliary Deputy Sheriff with the Will County Sheriff’s office for a season.

In keeping with the expansion of Tovstanovsky’s vision, he has now purchased Junge Ford and Junge Chrysler Jeep Dodge RAM under the brand name Sky Auto Mall. Prestige Motor Works and Junge Automotive will continue to operate separately from Sky Auto Mall.

For more information about Sky Auto Mall please visit their website at https://www.skyautomall.com/. 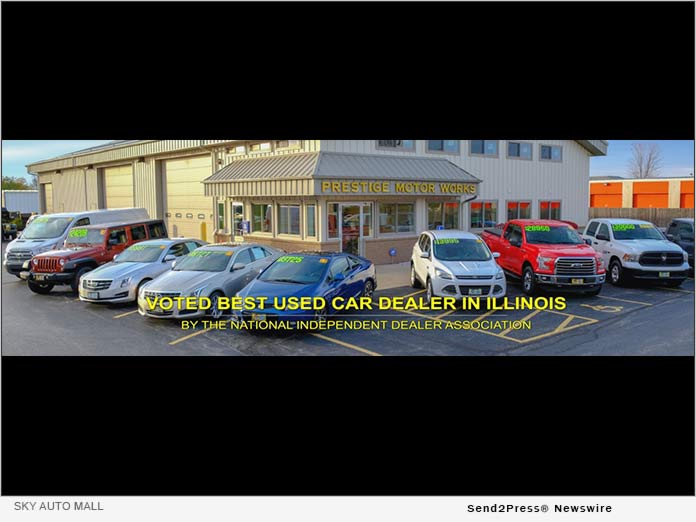 CAPTION: First Car ever sold by Prestige Motor Works out of the 8959 Hanslik Court, Naperville Location. A 1994 Ford Explorer. 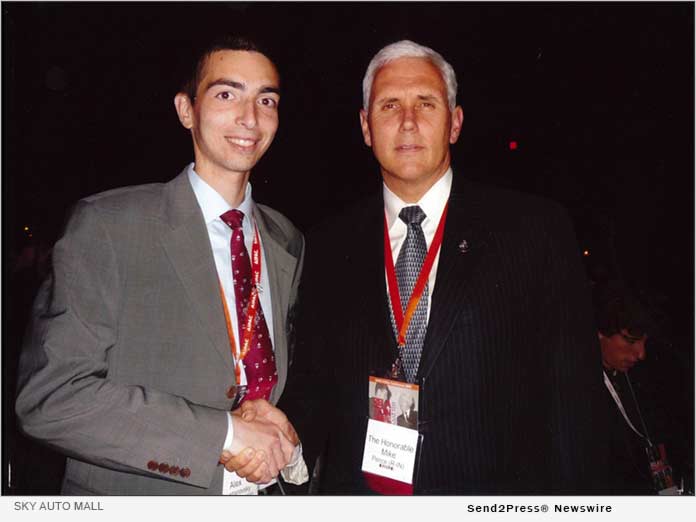 Welcome To Sky Auto Mall! It’s our pleasure to serve you and help make your next car-buying experience a smooth, enjoyable one. In fact, our Clear Sky Promise is designed to do just that. Our commitment is to be fully transparent, help make your visit quick and your experience with us a breeze! Our staff is friendly, knowledgeable and will help answer any questions you have about our new Ford, Chrysler, Dodge, Jeep or RAM models as well as used vehicles. Whether you live nearby in Center Point or you are making the short drive from Cedar Rapids, your experience with us will be an exceptional one.

LEGAL NOTICE AND TERMS OF USE: The content of the above press release was provided by the “news source” Sky Auto Mall or authorized agency, who is solely responsible for its accuracy. Send2Press® is the originating wire service for this story and content is Copr. © Sky Auto Mall with newswire version Copr. © 2021 Send2Press (a service of Neotrope). All trademarks acknowledged. Information is believed accurate, as provided by news source or authorized agency, however is not guaranteed, and you assume all risk for use of any information found herein/hereupon.