SAN JOSE, Calif., July 27, 2017 (SEND2PRESS NEWSWIRE) — NEXT Future Transportation Inc. (“NEXT”), a startup that is commercializing an autonomous mass-transportation and goods-movement solution, today announced that it has reached an important milestone in its vehicle prototype development. NEXT has made important progress over the past 18 months in developing its patented innovation that is based on swarms of modular self-driving vehicles, which can join and detach with other modules in full motion, allowing passengers to stand and walk from one module to another. 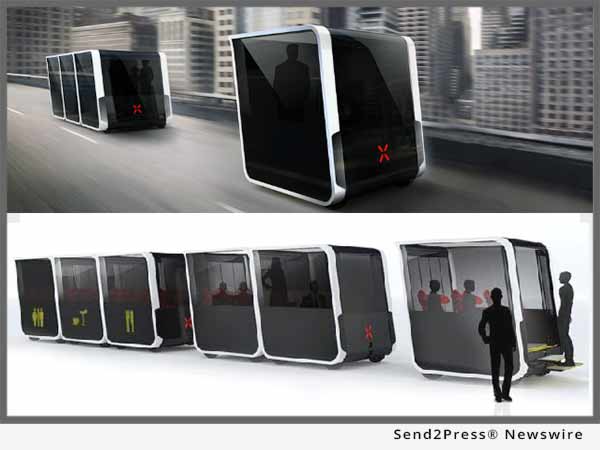 A YouTube video of NEXT vehicle prototype can be accessed via: https://youtu.be/erRJNtpns00.

“NEXT’s development milestone success is significant as it demonstrates our commercialization readiness, regardless of the state of the overall autonomous vehicle market,” said Tommaso Gecchelin, Co-Founder & CTO of NEXT.

“We will deploy a first generation of driver-operated vehicles, which will immediately allow NEXT fleets to operate on public roadways,” said Gecchelin.

NEXT’s development since its inception in 2015 has been incredibly rapid, and the mostly self-funded startup has met every milestone. NEXT initially developed and manufactured two 1:10 scale working prototypes to demonstrate docking and undocking in motion capabilities, collective vehicle steering and its own self-driving system. It subsequently manufactured two full-scale units to demonstrate NEXT’s superior design, as well as material quality and vehicle strength.

Earlier this year, NEXT signed a contract for a pilot project in Dubai with the RTA (Road Transportation Authority). The pilot project is supported by His Highness Sheikh Mohammed bin Rashid Al Maktoum.

“The NEXT team, which consists of engineers and technicians, has made tremendous progress since late 2015. Building on this work, we are looking forward to providing the Dubai government and other customers with a highly scalable and cost effective municipal transportation solution that will integrate into Dubai’s existing infrastructure and emerging modalities like Hyperloop,” said Spera.

About – NEXT Future Transportation:
NEXT is an advanced smart transportation system based on swarms of modular self-driving vehicles. Each module can join and detach with other modules on roads and highways. The company has created a proprietary open, bus-like environment among modules, allowing passengers to stand and walk from one module to another while in motion. To learn more, please visit: http://www.get-next.com/.

More from NEXT Future Transportation Inc.

ABOUT THE NEWS SOURCE:
NEXT Future Transportation Inc.

NEXT Future Transportation Inc. ("NEXT") is an advanced smart transportation system based on swarms of modular self-driving vehicles. Each module can join and detach with other modules on roads and highways. The company has created a proprietary open, bus-like environment among modules, allowing passengers to stand and walk from one module to another while in motion.

LEGAL NOTICE AND TERMS OF USE: The content of the above press release was provided by the “news source” NEXT Future Transportation Inc. or authorized agency, who is solely responsible for its accuracy. Send2Press® is the originating wire service for this story and content is Copr. © NEXT Future Transportation Inc. with newswire version Copr. © 2017 Send2Press (a service of Neotrope). All trademarks acknowledged. Information is believed accurate, as provided by news source or authorized agency, however is not guaranteed, and you assume all risk for use of any information found herein/hereupon.