Nina G, one of the first stuttering comedians, records debut solo album and live show at the Alameda Comedy Club

OAKLAND, Calif., Jan. 19, 2023 (SEND2PRESS NEWSWIRE) — Thirteen years ago, Nina G made her debut as the first stuttering female comedian. Since then, she’s challenged the status quo of how people who stutter are perceived – onstage and off. So, in an industry that lacks speech diversity, Nina G’s unique voice will record both her first solo comedy album and comedy special on March 9, 2023 from 6 to 8 p.m. at the Alameda Comedy Club located in her hometown. The album is projected to come out later in the spring on the Punchline Records label with the comedy special to follow. 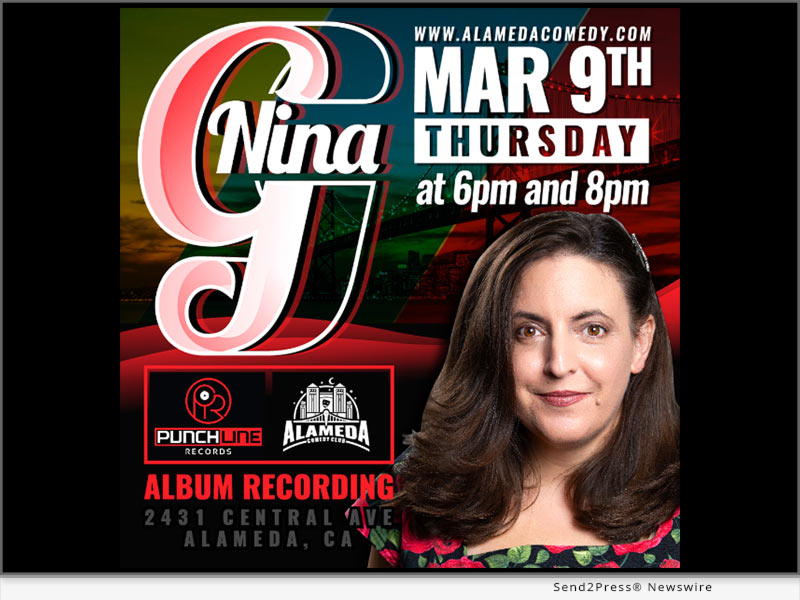 Since a child, Nina G’s mission has been to make people laugh, but she never thought it possible. Her story details how she first abandoned her dreams, but then was able to embark on a journey and embrace her voice to culminate in a comedic career.

Like many successful comedians, the material conveyed through her humor is grounded in reality. Nina G’s biting observations have made audiences laugh, worldwide. She touches on topics related to the broader disability experience, her Italian-American family and her experience paying back student loans.

And her audience is large. The Stuttering Foundation reports that, globally, there are more that 70 million people who stutter and that stuttering impacts about one percent of the adult population; one in four of them is female.

She says that there are many famous people who stutter too. Marilyn Monroe, James Earl Jones, President Joe Biden, Samuel L. Jackson and King George VI, who was the focus of the movie “The King’s Speech” all had or have issues with stuttering. While there’s no cure for stuttering, Nina G makes it easy for people to understand and laugh about it.

Her ability to quickly adapt makes her comfortable performing in multiple venues from comedy clubs and colleges/universities to conferences. She’s been featured on NPR’s “51 percent,” BBC’s “Ouch!,” TEDx, The Heumann Perspective podcast with Judy Heumann, radio and multiple day time talk shows and podcasts. She’s appeared in the pages of “Psychology Today” and is the author of three books including: “Bay Area Stand-Up Comedy: A Humorous History”; and “Stutterer Interrupted: The Comedian Who Almost Didn’t Happen.”

An international keynote speaker, Nina G has learned that the issues impacting people with disabilities impact everyone. She hopes her album and comedy special will not only entertain, but inform, not just stutterers, but all.

In 2021, the British Stammering Association launched a campaign to raise awareness around stuttering in the media. “No diversity without disfluency” was one of the tags used to illustrate the need for stuttering voices among those in the mainstream.

“These voices shouldn’t be heard only on stuttering awareness days or weeks, but across all media,” Nina G says.

Gina Chin-Davis, the director of Nina’s comedy special, and also a stutterer, says, “There’s so much ignorance and misinformation about stuttering out there. With Nina G, you not only get comedy, you also get schooled on what stuttering really is and how to respectfully interact with people who stutter. It’s exciting to collaborate with someone who can skillfully walk the line between entertainment and education.”

Mathew Layne of Punchline Records adds, “One of the reasons I started Punchline Records was to help amplify comedic voices that may have otherwise been marginalized. Funny is funny. Nina G is one of the funniest – stuttering or not.”

When she first started out, Nina G. was the only woman who stuttered in the stand-up comedy world. Today, she co-produces the “Comedians with Disabilities Act,” a national touring comedy show featuring exclusively comedians with disabilities. She also produced the first compilation album to feature Disabled Comedy Only. Nina’s brand of comedy reflects the experiences of many with disabilities.

Gina Chin-Davis is an award-winning filmmaker and writer based in California. She attended Barnard College in New York City where she received the Howard M. Teichmann Writing Prize for work distinguished in originality of concept and excellence of execution. Chin Davis’ writings have been featured in Rigorous, Penultimate Peanut, and The Conium Review, and her plays have been produced by The Aluminous Collective and The Piedmont Center for the Arts.

Her first feature film, “I Can’t Sleep,” was produced on a self-raised budget of $10K and went on to win Best Script at the Boston Sci-Fi Film Festival and Best Sci-Fi Film at the MidWest WeirdFest. Outside of her creative endeavors, Chin-Davis is a clinical psychologist. Her greatest honor has been to return to her hometown of Richmond, CA to provide trauma-informed mental health care to young adults in the public health sector.

View More Performers and Celebrity News
Mathew Layne of Punchline Records said, "One of the reasons I started Punchline Records was to help amplify comedic voices that may have otherwise been marginalized. Funny is funny. Nina G is one of the funniest - stuttering or not."

LEGAL NOTICE AND TERMS OF USE: The content of the above press release was provided by the “news source” Nina G or authorized agency, who is solely responsible for its accuracy. Send2Press® is the originating wire service for this story and content is Copr. © Nina G with newswire version Copr. © 2023 Send2Press (a service of Neotrope). All trademarks acknowledged. Information is believed accurate, as provided by news source or authorized agency, however is not guaranteed, and you assume all risk for use of any information found herein/hereupon.