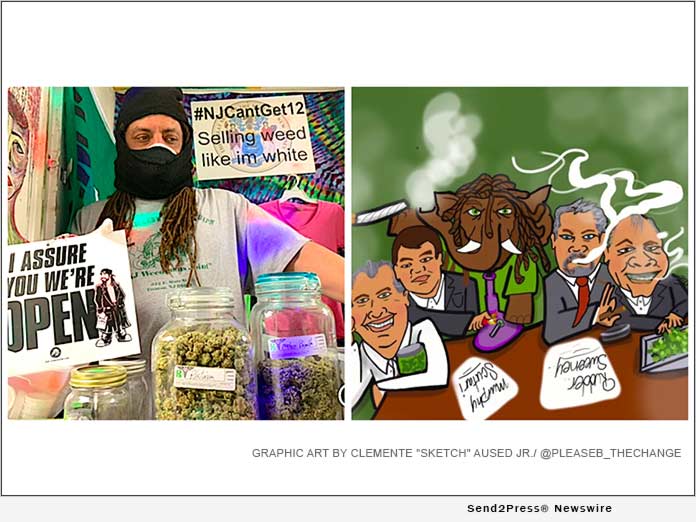 PHOTO CAPTION: Ed “NJWeedman” Forchion (left image) is fighting for inclusion and equality for marginalized vendors who are being excluded in the cannabis legalization marketplace.

In response to the governor’s recently filed request for the lawsuit’s dismissal (http://www.njweedman.com/Federal_Cannabis_Lawsuit_Murphy_REPLY.pdf) , Forchion’s attorney, John Vincent Saykanic, Esq. has filed a 78-page complaint for declaratory and injunctive relief (http://www.njweedman.com/Federal_Cannabis_Lawsuit_Njweedman_Response.pdf). Governor Murphy, represented by the Attorney General of New Jersey Gurbir S. Grewal, requested the dismissal claiming in defense that he has not officially signed the state’s pending Regulated Cannabis Act. Peter G. Sheridan, United States District Judge for the District of New Jersey has elected to hear oral arguments on February 17, 2021.

Forchion has accused the state of baiting New Jersey citizens into voting for the legalization of a corporate, Caucasian run cannabis industry, under the guise of legalizing marijuana. Forchion notes that under the current developing legislation, marijuana would still be illegal and in fact, criminalized, in underserved communities. Boldly fighting for inclusion and equality for marginalized vendors who are being excluded in the legalization marketplace, Forchion’s arguments champion what he defines as the “existing underground marketeers that currently provide 90% of the marijuana consumed in the state.”

“I’m demanding small businesses like myself, which ironically are the backs the current industry is built upon, be granted concessions that are due to us based on the well documented history of our marijuana related prosecution across this country. Now, corporations and state politicians are attempting to write us out of this multibillion-dollar industry, and my lawsuit documents and challenges the complicity of these efforts,” expresses Forchion. “Considering that Governor Murphy has not yet signed the Regulated Cannabis Act that I am contesting, will he further delay signing it while this case proceeds? And if so, where does that leave the thousands of citizens who voted for legalization?”

Forchion, a cannabis cult figure, has rallied for fair representation and legalization for over three decades now. In 2016, his lawyer, Attorney Saykanic, filed Forchion’s case challenging the state of New Jersey before the United States Supreme Court regarding pertinent issues pertaining to reefer, racial discrimination and religion.

“I have always believed in Forchion’s legal battles. Since his first arrest in 1997 to his current Citizen Dispensary located across the street for Trenton City Hall, Forchion has never backed down from the systemic racial discrepancies inherit in the structuring of the cannabis legalization industry. This lawsuit may redefine how legalization will ultimately play out in New Jersey. Forchion is controversial yes, but his insight, arguments, and academic understanding of the languaging of law are proving to stand the test of time. Many of us are just now beginning to fully realize the impact of concerns he has espoused for decades now,” notes Attorney Saykanic.

In his lawsuit, filed in November 2020, Forchion sought to have the “Court declare unconstitutional and invalid the application and implementation of the ‘Constitutional Amendment to Legalize Marijuana.’” Forchion asserted that the Regulated Cannabis Act, as the amendment is referred to in the lawsuit, “deprives him of equal protection and due process under the Fourteenth Amendment to the United States Constitution as it subjects him to selective prosecution.”

Forchion also noted that the state unfairly allows Compassionate Use Medical Marijuana Act (CUMMA) dispensaries to possess large amounts of marijuana in violation of federal law while prosecuting individuals such as himself. Forchion has had numerous marijuana related prosecutions brought against him by the State of New Jersey, including a pending matter.

Forchion further proposed that voters were duped into believing that they were voting to legalize marijuana, while unwittingly sanctioning a cannabis industry which only grants legalization to a majority of Caucasian owned corporate entities while criminalizing many individuals of color, who in effect will not be granted similar access to grow, sale and distribute. Comparing the pending legislation to the 1990’s cocaine vs. crack dilemma, Forchion cites how the State is subtly creating a distinction between illegal “marijuana” supplied by vendors like him, versus state ‘regulated cannabis’ sold by majority Caucasian owned and operated corporations.

New Jersey’s cannabis legislature has come under increasingly mounting criticism with the state publicly criticized for attempting to push through a corporatized cannabis culture with not enough regard for the constituents that voted it through. The state seemingly hangs in yet further limbo as the Governor may now delay full legislative passage per Forchion’s unprecedented filing. News of longtime New Jersey resident, Rohan Marley, and son of reggae legend Bob Marley, entering the market with his Lightshade retail site offers inspiring signs of hope, however.

In the past, Forchion has been vehemently retaliated against by the State of New Jersey. In 2002, he was jailed for advocating the legalization of marijuana. Forchion was held at the Burlington County Jail for over five months when United States District Court Federal Judge Joseph E. Irenas, U.S.D.J., hearing his civil rights suit, agreed that the state had violated Forchion’s First Amendment right to advocate marijuana’s legalization and ordered him to be released.

In 2016, Forchion and his partner, Debi Madaio, had their restaurant, NJWeedman’s Joint, raided by Mercer County law enforcement authorities on marijuana dealing charges. Forchion was held without bail for 447 days due to the retaliatory charge of witness tampering. He was acquitted by a jury and all charges were dismissed with no convictions.

Media, legislature, politicians and cannabis activists and supporters worldwide are taking close heed of this case as it maneuvers the smoky realms of legalization. Find out more about Ed “NJWeedman” Forchion at https://linktr.ee/NJWeedman .

LEGAL NOTICE AND TERMS OF USE: The content of the above press release was provided by the “news source” Ed Forchion or authorized agency, who is solely responsible for its accuracy. Send2Press® is the originating wire service for this story and content is Copr. © Ed Forchion with newswire version Copr. © 2021 Send2Press (a service of Neotrope). All trademarks acknowledged. Information is believed accurate, as provided by news source or authorized agency, however is not guaranteed, and you assume all risk for use of any information found herein/hereupon.