Send2Press › Wire › Global Aid and Disaster Relief › On World Humanitarian Day, Scientology Salutes Those Who Help in Times of Need

On World Humanitarian Day, Scientology Salutes Those Who Help in Times of Need

LOS ANGELES, Calif., Aug. 19, 2021 (SEND2PRESS NEWSWIRE) – World Humanitarian Day, August 19, “recognizes the efforts of aid workers who put their lives on the line to help affected people during times of global crisis.” With the number and severity of natural disasters escalating and a pandemic that continues to surge, World Humanitarian Day takes on entirely new dimensions. The past 18 months have truly put the dedication and resources of humanitarians to the test. The Church of Scientology International extends thanks to: 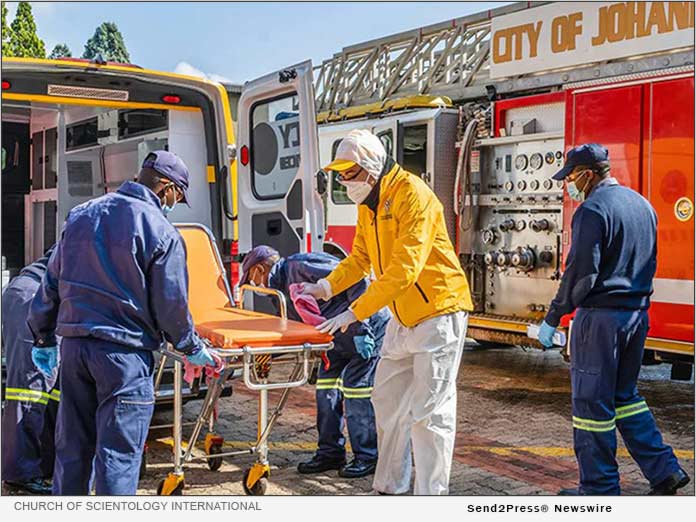 “We salute the many organizations and groups our Volunteer Ministers partner with to bring indiscriminate help to those in need,” says Olivia McDuff from the Public Affairs Office of the Church of Scientology International.

Traditionally, World Humanitarian Day is a time when Scientology Churches honor Volunteer Ministers who serve in their communities in times of disaster and throughout the year. And this has been an unprecedented era of help. Since the pandemic began, Scientology Volunteer Ministers teams responded to tornados in the Czech Republic and Nashville, Tennessee; earthquakes in Croatia, Pakistan and most recently Haiti; hurricanes in Costa Rica and Guatemala; fires in Greece, Sardinia, Oregon and Northern California; floods in Germany, Belgium and Greece; an oil spill in Israel, and a volcano in St. Vincent and the Grenadines.

But the main thrust of Volunteer Ministers has been helping their communities get through the pandemic safe and well.

On March 13, 2020, the birthday of Scientology Founder L. Ron Hubbard, Mr. David Miscavige, ecclesiastical leader of the Scientology religion, reminded Scientologists of a maxim coined by Mr. Hubbard: “An ounce of prevention is worth a ton of cure…” Mr. Miscavige set the tone of the Church’s response to the pandemic: “Well, how about a ton of prevention so as not to require an ounce of cure?”

To protect Scientology Churches, staff, parishioners and their communities, the Church researched and compiled authoritative and effective guidelines for dealing with such an outbreak and distilled them into a series of illustrated booklets written in simple, direct language anyone can understand.

Scientology Volunteer Ministers distributed more than 7.5 million copies of these booklets in 189 cities on six continents. They provided these booklets to essential businesses for their customers and to neighbors throughout their communities to ensure they understand how to protect themselves and their families.

Scientologists set up and manned helplines in Milan, Italy; Tel Aviv, Israel; and Sacramento, California. In cities across the world, Scientology Volunteer Ministers worked with other nonprofits to provide needed medical equipment, food, prescriptions and clothing to the vulnerable in their communities. They set up and contributed to food distribution drives, and helped at COVID-19 testing and vaccination stations.

The Church also researched and implemented the most effective decontaminant system available and provided training in its use to Scientology Churches worldwide. In addition to using this to protect their own Churches, Scientologists reached out in their communities with help:

But nowhere was the contribution of the Scientology Volunteer Ministers more vital and appreciated than in South Africa. Their work is documented in a series of videos on the Scientology website. To date, South African Volunteer Ministers have sanitized 2.9 million square feet of healthcare centers, orphanages, police and fire stations, transportation hubs, buses, and minibus taxis. They have distributed 1 million Stay Well booklets in English, Zulu, Xhosa and Sotho. They have trained some 12,000 people on Scientology Volunteer Ministers courses. In all, they have contributed more than a million volunteer hours to help their country through these challenging times.

In creating the program in the mid-1970s, Scientology Founder L. Ron Hubbard wrote that a Volunteer Minister “helps his fellow man on a volunteer basis by restoring truth and spiritual values to the lives of others… A Volunteer Minister does not shut his eyes to the pain, evil and injustice of existence. Rather, he is trained to handle these things and help others achieve relief from them and new personal strength as well.”

With the events of the 9/11 terrorist attacks in New York City, Scientology ecclesiastical leader Mr. David Miscavige called on Scientologists to redouble their efforts to aid their fellow man. He issued a directive entitled “The Wake-Up Call,” which has inspired exponential growth within the Volunteer Minister movement.

View More Global Aid and Disaster Relief News
"We salute the many organizations and groups our Volunteer Ministers partner with to bring indiscriminate help to those in need," says Olivia McDuff from the Public Affairs Office of the Church of Scientology International.