CLARKSDALE, Miss., Feb. 16, 2021 (SEND2PRESS NEWSWIRE) — “What is the value of one good job?” asks Crossroads Economic Partnership. For Spencer George, it means higher income and better well-being for himself and family. It also means understanding his own higher potential. Just a few years ago, living in Clarksdale, Mississippi, Spencer wouldn’t have dreamed he could ever work in the development and distribution of leading-edge technology. 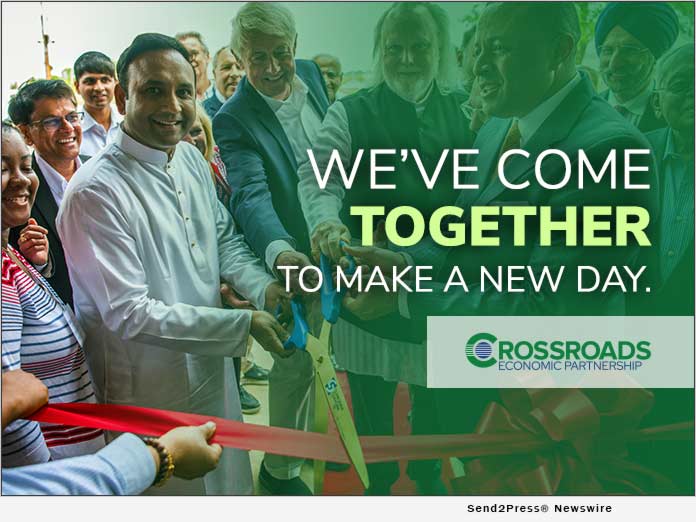 Clarksdale is located in the Mississippi Delta, the poorest region in the poorest state in the nation. Decent jobs have been traditionally hard to come by, and certainly high-tech jobs were once unimaginable for this flat, agricultural region along the Mississippi River.

But at the Robotic Process Automation (RPA) Center of Excellence, opened in 2020 in Clarksdale at the PeopleShores Center, Spencer is not just dreaming, he’s living his dream. And now in his new job he’s also helping other workers around the globe discover their own higher potential, as RPA automates business processes through software bots, relieving workers of low-level, repetitive tasks and allowing them to engage more meaningfully and creatively in the workplace.

A new day in Clarksdale

Like Spencer, Clarksdale is discovering its potential as a newly vitalized gigabit city. Known as the birthplace of the Blues, Clarksdale now hums with new ideas and excitement, in an era which began with the development of an ecosystem of leadership fostered by the Crossroads Economic Partnership.

“We’ve come together to make a new day,” explains Jon Levingston, Executive Director of the Partnership. “Today we are collaborating at every level, weaving a network of economic, governmental, educational, and social leadership. We are transforming expectations and changing lives for the better.”

Results have been immediate and impressive: Since 2018, five new economic development projects have been completed in Clarksdale involving both expansions and startups. Arriving in 2018, PeopleShores is a global leader in impact sourcing. A Silicon Valley-based for-profit social impact enterprise, PeopleShores is committed to helping underserved communities by creating tech-enabled jobs that provide office solutions for multiple sectors, including tech, retail, travel, banking, and insurance. In 2020, Automation Anywhere, a global leader in RPA, joined with PeopleShores to create the Automation Anywhere / PeopleShores Robotic Process Automation Center of Excellence for training people in the development of AI software.

“We are strategically located just south of Memphis and the Tennessee border, but we offer that hometown feel,” said Clarksdale Mayor Chuck Espy. “After attracting PeopleShores, a Silicon Valley company, we want to capitalize on that momentum. Clarksdale is open for business and we’re ready to do the work.”

Workforce development has gone well beyond expectations of company management. Custom training in partnership with Coahoma Community College and the Delta Area Workforce Board has prepared PeopleShores associates quickly and strategically, expediting their participation in the Automation Anywhere University certification process.

“Through our partnership with Automation Anywhere and regional leaders, we are training associates to become bot developers in as little as six months,” notes Murali Vullaganti, founder of PeopleShores. The company expects to train 200 associates from across the region. “We’ve taken the plunge; we’ve come here and we’ve proven that they can do the work.”

In addition to PeopleShores and Automation Anywhere, Clarksdale has attracted Image Industries, a Chicago steel manufacturing business that moved its entire company to the Delta. The company will be hiring at least 50 employees. According to Blake Hobson, co-owner of Image Industries, ““One of the biggest things that had to do with it was the people. We have never met more warm, welcoming people in all of our lives and that was a significant deciding factor for us.”

Saf-T-Cart – a homegrown industry – is finalizing a $1.5 million expansion at the plant that manufacturers steel carts and welding storage products. The expansion is bringing 25 new jobs.

MAP of Easton Inc. expanded their Clarksdale location in 2018, adding approximately 40 new jobs to the 51 they previously employed. MAP of Easton Inc. manufactures products including automotive, architectural and acousta-art.

“We, obviously, like Clarksdale,” said John D’Amico, president of MAP of Easton. “We want to stay in Clarksdale and we want to use the Clarksdale people as much as possible.”

Not long ago, a flourishing partnership between Silicon Valley and the Mississippi Delta might have seemed unlikely. But in this new day, as workers like Spencer realize their potential, the value of one good job appears limitless in Clarksdale, Mississippi.

Crossroads Economic Partnership: Today, the excitement is unprecedented, and so is the opportunity. In a gigabit city humming with creative ideas, possibility and pride, we have come together to make a new day through a vital new ecosystem of leadership, fostered by the Crossroads Economic Partnership. Together we are nurturing comprehensive collaboration and sparking local and global transformation.

LEGAL NOTICE AND TERMS OF USE: The content of the above press release was provided by the “news source” Crossroads Economic Partnership or authorized agency, who is solely responsible for its accuracy. Send2Press® is the originating wire service for this story and content is Copr. © Crossroads Economic Partnership with newswire version Copr. © 2021 Send2Press (a service of Neotrope). All trademarks acknowledged. Information is believed accurate, as provided by news source or authorized agency, however is not guaranteed, and you assume all risk for use of any information found herein/hereupon.