SEATTLE, Wash., July 14, 2020 (SEND2PRESS NEWSWIRE) — Oscilla Power Inc. would like to announce that they are now in the planning stages of a demonstration of their 1MW ‘Triton’ ocean wave energy system in Southern India. The particular location targeted for this utility-scale project is adjacent to Vizhinjam International Seaport, near Thiruvanathapuram, in the state of Kerala. This region has been identified as having one of the highest wave energy intensities in India. As a whole, the annual average incident wave energy intensity in India is about 60 GW, and about 5-10 GW of this may be practically utilizable. 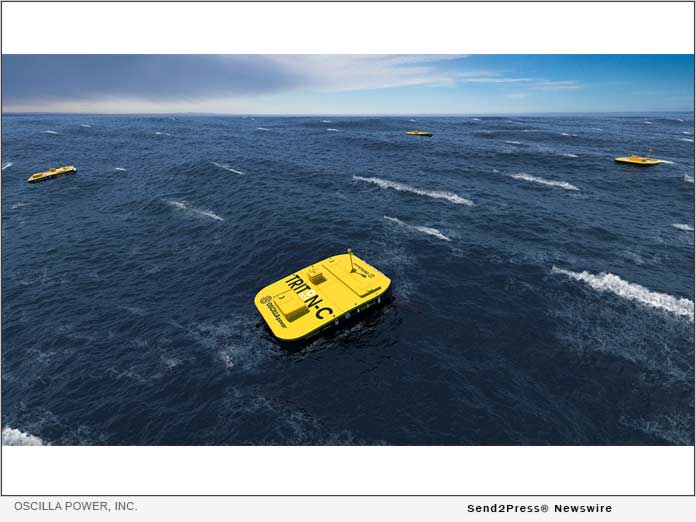 The project will involve a number of key local and national agencies in India. Kerala’s Agency for New and Renewable Energy (ANERT) will lead implementation of the project, while Dr. Jayakumar, the CEO of Vizhinjam International Seaport Ltd. (VISL) will act as the Principle Investigator. Mr. Rajesh Jha, Chief Executive Officer of Adani Vizhinjam Port Private limited (AVPPL) has also expressed support for the project. Senior researchers from the Department of Ocean Engineering at the Indian Institute of Technology (IIT) Madras (Chennai) will also participate in the proposed project.

Oscilla Power’s Triton Wave energy Converter provides many unique elements that allow it to extract energy from the ocean at a much lower cost than has been achieved by others. Oscilla is currently finishing construction of a smaller 100kW version of this system which is expected to be installed in Hawaii next year.

Oscilla Power Inc. is an ocean wave energy technology company that is developing an advanced wave energy converter aiming to unlock the tremendous renewable energy potential of the world’s oceans.

Oscilla Power, Inc. is an ocean wave energy technology company that is developing an advanced wave energy converter aiming to unlock the tremendous renewable energy potential of the world's oceans.

LEGAL NOTICE AND TERMS OF USE: The content of the above press release was provided by the “news source” Oscilla Power Inc. or authorized agency, who is solely responsible for its accuracy. Send2Press® is the originating wire service for this story and content is Copr. © Oscilla Power Inc. with newswire version Copr. © 2020 Send2Press (a service of Neotrope). All trademarks acknowledged. Information is believed accurate, as provided by news source or authorized agency, however is not guaranteed, and you assume all risk for use of any information found herein/hereupon.