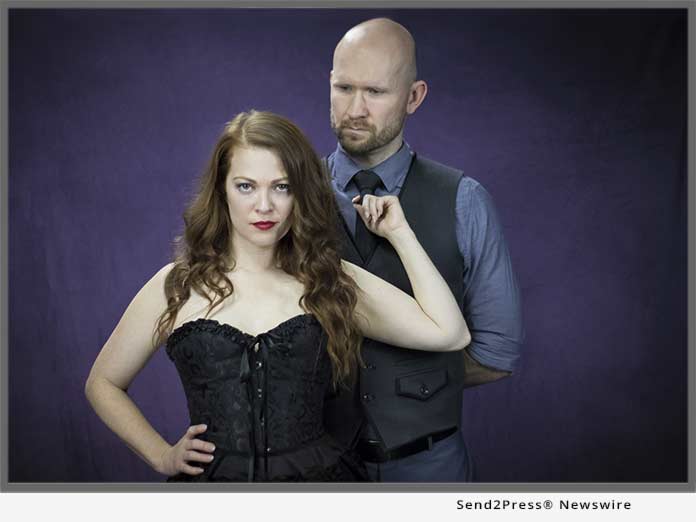 “The first time I read this play, I was enthralled,” said director, Adriane Galea. “It’s so smart in the way that it weaves literary references and mythology and a dialogue on feminism into the story, but it also has this undercurrent of seduction. And the way it ends is really wild.”

David Ives’ telling of the classic tale places aspiring actress, Vanda Jordan, in an audition for Thomas Novachek’s adaptation also entitled “Venus in Fur,” reading with the adapter himself. The role of Vanda is being played by Dani Cochrane, who notes that the script is “an electrifying power play.”

As the audition goes on, the lines start to blur between what is scripted and what is reality, as the two embark on a journey of dominance and submission, and who holds the power changes from line to line. As the story unfolds, it “will have you wondering at any given time, who is really holding the cards?” said Cochrane.

On the surface, “Venus in Fur” may seem like a play about S&M — as even Vanda notes throughout — but there’s a lot more being said about societal constructs. Joshua Brown, who plays Thomas, notes that theatre helps the audience “rethink previous held beliefs – and to grow,” and that’s more aligned with the messaging of the play.

“The true gift of any art form is its ability to allow us exploration of all facets of our existence – and gain a further understanding of our world – to question limits. ‘Venus in Fur’ is such an opportunity,” said Brown.

“Venus in Fur,” which opens on Valentine’s Day, is not a traditional date play, but could be a fun alternative to flowers and chocolate. Or for the single theater goer looking for good storytelling or to escape the drab winter, there is an opportunity to simply come see “an amazing story – that shows the empowerment of women no matter what their role,” according to the show’s costume designer, Cheryl Zemke of Z Creations.

Outvisible advises patrons that “Venus in Fur” contains strong sexual content and that minors will not be permitted to see the show without parental consent. “‘Venus’ is definitely the most risque show we’ve ever done here, but nothing is done for shock value; it’s about art,” said Galea. “At its core, this is a dialogue on sex and gender, but we want everyone to feel comfortable with what they’re seeing, especially since our performance space is so tiny. But this show is something I could watch over and over again and discover something new and interesting.”

About “Venus in Fur”:
Thomas, a beleaguered playwright/director, is desperate to find an actress to play Vanda, the female lead in his adaptation of the classic sadomasochistic tale “Venus in Fur.” Into his empty audition room walks a vulgar and equally desperate actress—oddly enough, named Vanda. Though utterly wrong for the sophisticated part, Vanda exhibits a strange command of the material, piquing Thomas’ interest with her seductive talents and secretive manner. As the two work through the script, they blur the line between play and reality, entering into an increasingly serious game of submission and domination that only one of them can win.

For a complete listing of show times, please visit https://www.outvisibletheatre.com/.

All tickets on weekdays available for a donation of any amount to the theatre. Patrons may reserve their spot online through the box office or in-person starting one hour prior to curtain.

Students receive a $10 discount with valid school ID; only one ticket may be purchased per ID.

Groups of eight or more: Contact Adriane Galea at adriane@outvisibletheatre.com or 313-427-2490

Outvisible Theatre Company is a 501(c)(3) nonprofit organization founded in 2016 under the umbrella of Center Stage Studios as a means for practical application of theatre education. Outvisible operates out of a 20-40 seat movable black box space and looks to tell stories with honesty and challenging ideas through art and imagination through our passion for intelligent and thought-provoking theatre. Learn more: https://www.outvisibletheatre.com/.

View More Performing Arts News
"The true gift of any art form is its ability to allow us exploration of all facets of our existence - and gain a further understanding of our world - to question limits. 'Venus in Fur' is such an opportunity," said Joshua Brown, who plays Thomas.

Outvisible Theatre Company is a 501(c)(3) nonprofit organization founded in 2016 under the umbrella of Center Stage Studios as a means for practical application of theatre education. Outvisible operates out of a 20-40 seat movable black box space and looks to tell stories with honesty and challenging ideas through art and imagination through our passion for intelligent and thought-provoking theatre.

LEGAL NOTICE AND TERMS OF USE: The content of the above press release was provided by the “news source” Outvisible Theatre Company or authorized agency, who is solely responsible for its accuracy. Send2Press® is the originating wire service for this story and content is Copr. © Outvisible Theatre Company with newswire version Copr. © 2019 Send2Press (a service of Neotrope). All trademarks acknowledged. Information is believed accurate, as provided by news source or authorized agency, however is not guaranteed, and you assume all risk for use of any information found herein/hereupon.