Plano Texas Resident Takes the Stage for 80th Time as Scrooge in NTPA’s Production of ‘Scrooge, the Musical’

PLANO, Texas, Dec. 7, 2020 (SEND2PRESS NEWSWIRE) — North Texas Performing Arts announces that Plano resident Darrell Rodenbaugh, who has played the title role of Scrooge since the tradition began in 2011, is again taking the stage in its 10th annual Christmas celebration of “Scrooge – The Musical” presented by Transamerica. 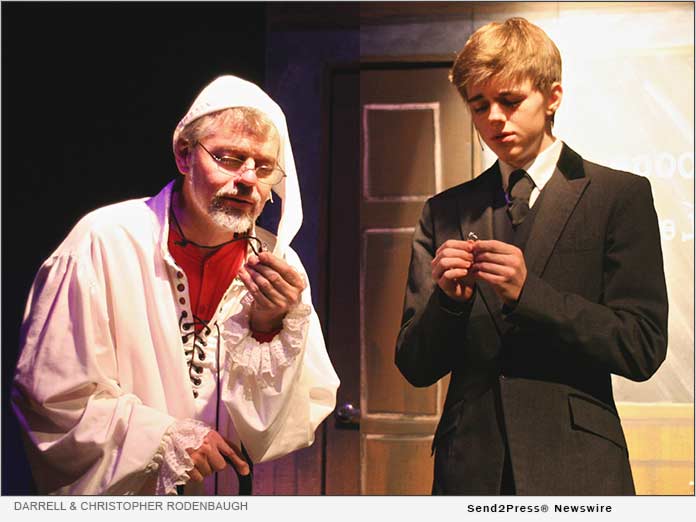 This year’s special tenth anniversary of “Scrooge, the Musical” will feature over 100 actors in this holiday favorite that has captivated in 80 performances over the past decade. This year for the first-time ever, NTPA will offer audiences an option to view “Scrooge, the Musical” from the comfort and safety of their own home with a livestream high-quality video experience.

Since 2011 and by the end of this year’s schedule, Rodenbaugh will have taken the stage some 80 times, attended by over 10,000 patrons. Over a decade, Rodenbaugh has dedicated an estimated 2,000 rehearsal/practice hours into this role and “Scrooge, the Musical” productions.

While theatres often have multi-year program runs, it is highly unusual to cast the same character in the same leading role. NTPA creates an annual tradition centered around this program that typically includes caroling, visits from Santa, and special “Gift to the Community” shows where they waive ticket fees and provide gifts and treats to veterans, underprivileged, and this year, those stricken with Covid-19 economic challenges.

“I come back each year because I believe in Scrooge’s very special message of rebirth and redemption,” explains Rodenbaugh. “It teaches us that we have the opportunity to start our lives all over again and change for the better, and now, more than ever, we need this positive message of history’s second greatest Christmas Story.”

Rodenbaugh’s performance was described in a Dallas Morning News review some years ago as “brilliant … robust and passionate,” and the show continues to gain each year in its following with many patrons making it a “Christmas Tradition” to see NTPA’s “Scrooge – The Musical.”

“You might think after ten years he would ease off, but each year he pushes to make it bigger and better,” says the show’s Director Mike Mazur. “And while he has brought the role to life so many times, each year he re-auditions and earns his spot, then goes on to become one of the hardest working members of the cast.”

In this year’s special production, Darrell will be joined by his son Christopher Rodenbaugh as Young Scrooge who played the role from its opening season through 2016. Unable to perform in the production since 2017 due to attending an out-of-state college, Christopher is excited to reprise the role once again this year which includes a powerfully heart-breaking duet with his father.

“Darrell continues to re-invent this character each year with such attention to detail,” says Plano Children’s Theatre Founder and four-time “Scrooge” Director Sara Akers who is now NTPA’s VP of Community Affairs. “He effectively brings us from hating him to celebrating with him at the end and the entire performance is a true delight!”

“Our first year was largely as a ‘team building’ and fundraising activity for the Plano Children’s Theatre (PCT) Board of Directors,” explains Rodenbaugh, “and it’s been humbling to see it grow from a little over a dozen to over 100 actors this year and become NTPA’s biggest annual box office production.”

Since reopening in June, North Texas Performing Arts has adopted a strict protocol of mask requirements, safe social distance guidelines, and health checks. Theatre seating is limited to enable distancing between groups in compliance with the Governor’s guidelines, and streaming is available to those preferring to view these performances online. Actors must wear protective masks at all times (including onstage), and no more than 30 performers at a time are permitted on a safe socially distant stage.

“Scrooge, the Musical” is sponsored in part by the City of Plano and Transamerica.

For more information and showtimes go to https://northtexasperformingarts.org/event/scrooge/.

North Texas Performing Arts is a 501(c)(3) non-profit organization dedicated to developing the character of youth through quality performing arts education and family entertainment evolving from the Plano Children’s Theatre created three decades ago by Sara Akers. NTPA is Headquartered at Willow Bend Center of the Arts in Plano and has theatres in Fairview, Frisco, and Dallas. Each year NTPA provides opportunities to more than 11,000 youth ages three to 18 years old to experience the impact of the performing arts through its “learning lab” training process.

This year’s program will feature actors in masks and safe social distancing.

View More Performing Arts News
"Our first year was largely as a 'team building' and fundraising activity for the Plano Children's Theatre (PCT) Board of Directors," explains Rodenbaugh, "and it's been humbling to see it grow from a little over a dozen to over 100 actors this year and become NTPA's biggest annual box office production."

North Texas Performing Arts is a 501(c)(3) non-profit organization dedicated to developing the character of youth through quality performing arts education and family entertainment evolving from the Plano Children's Theatre created three decades ago by Sara Akers. NTPA is Headquartered at Willow Bend Center of the Arts in Plano and has theatres in Fairview, Frisco, and Dallas.

LEGAL NOTICE AND TERMS OF USE: The content of the above press release was provided by the “news source” North Texas Performing Arts or authorized agency, who is solely responsible for its accuracy. Send2Press® is the originating wire service for this story and content is Copr. © North Texas Performing Arts with newswire version Copr. © 2020 Send2Press (a service of Neotrope). All trademarks acknowledged. Information is believed accurate, as provided by news source or authorized agency, however is not guaranteed, and you assume all risk for use of any information found herein/hereupon.