Send2Press › Wire › Entertainment › Books and Publishing › Poetry as an Instrument Against War: ‘Libretto for the Desert’ Audiobook Released

Poetry as an Instrument Against War: ‘Libretto for the Desert’ Audiobook Released 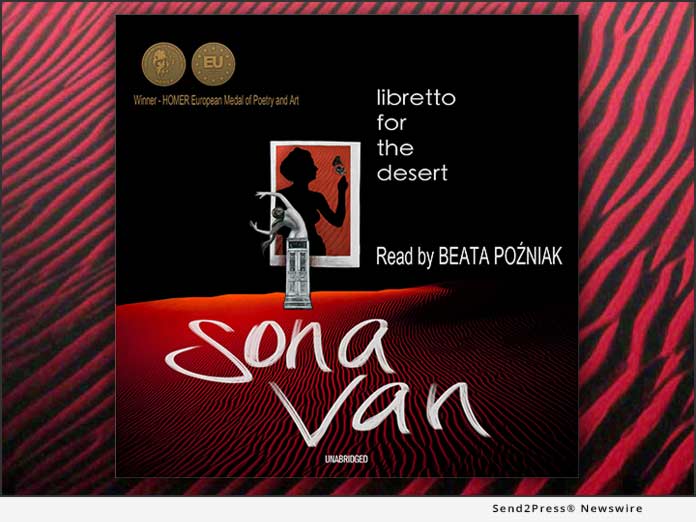 Van’s parents and grandparents were driven into exile due to this horrific event. Her poems reflect a personal connection to this history as well as the universality of loss, persecution, and intolerance. Van is the winner of numerous international prizes and medals, including the Homer – European Medal of Poetry.

“Libretto for the Desert” by Sona Van has come a long way. It has been presented around the world including China, Kenya, Republic of Africa, Russia, India, and recently at the Medellin of South America during the world’s largest international poetry festivals and presentations. This book has been translated in 23 languages worldwide. 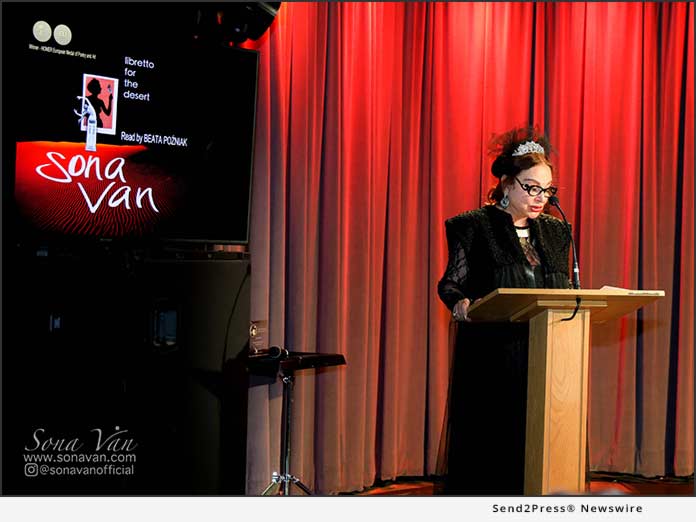 Van uses poetry as her instrument, saying it is “the most useful tool to rescue compassion, empathy and tolerance—to find common ground for a dignified coexistence and mutual survival of the human species in an otherwise endangered universe.”

Beata Pozniak is an actress, poet, and activist. In 1994 she introduced the first bill in the history of US Congress to officially recognize International Women’s Day in the United States. In her work, Pozniak is drawn to strong female characters, both on-screen and in the audiobook world. Her roles, which have ranged from the first female President of the world on television to Catherine the Great, are a testament to her values as a human rights activist.

“Sona Van is a voice howling in the wilderness, a distinct, profound voice; a teller of tales too terrible to be forgotten, a weaver of images both inchoate with longing and ripe fecund with imagery. This is music to be felt like the dry wind of the desert, felt on the skin as if a bullet had just skimmed by, barely missing the beating heart.” — Diversions LA magazine (Los Angeles).

“Beata Pozniak’s accented, dramatic narration conjures a faraway desert land. Sona Van’s abstract meditation on the Armenian genocide of 1915-1917 is dedicated to the victims of all wars and atrocities. Plumbing the depths of pain, Pozniak’s narration is intense, breathy, and emotional, and is augmented by background sounds of desert winds and distant, echoing Middle Eastern music….” — AudioFile Magazine.

This moving audio experience is the result of a profound collaboration of friendship and philosophy between author Sona Van and narrator Beata Pozniak. The women are the recipients of the 2019 International Maria Konopnicka Prize, which promotes literature and cultural achievements of outstanding women. Van and Pozniak are women’s rights activists, and their strong stance against war and genocide is paramount in guiding their lives and creative endeavors.

The two met in New York through a mutual Armenian poet friend, and as Pozniak describes of her experience reading Van’s poetry, “I kept hearing a voice full of pain and anguish, but also hope. The vivid images wouldn’t let go of me. This is when the idea came about to create an audiobook.” The result is a powerful, sensory experience where voice and language combine to fully envelop the reader.

On air since 1989, Horizon is the first 24-hour Armenian television network in America. For nearly 30 years, Horizon Armenian TVN has been connecting Armenian-Americans to Armenian culture and heritage, voicing issues vital to the community on many levels. Learn more: http://horizonarmtv.com/

View More Books and Publishing News
"I kept hearing a voice full of pain and anguish, but also hope. The vivid images wouldn't let go of me. This is when the idea came about to create an audiobook," said narrator Beata Pozniak.

On air since 1989, Horizon is the first 24-hour Armenian television network in America. For nearly 30 years, Horizon Armenian TVN has been connecting Armenian-Americans to Armenian culture and heritage, voicing issues vital to the community on many levels.

LEGAL NOTICE AND TERMS OF USE: The content of the above press release was provided by the “news source” Horizon Armenian Television Network or authorized agency, who is solely responsible for its accuracy. Send2Press® is the originating wire service for this story and content is Copr. © Horizon Armenian Television Network with newswire version Copr. © 2019 Send2Press (a service of Neotrope). All trademarks acknowledged. Information is believed accurate, as provided by news source or authorized agency, however is not guaranteed, and you assume all risk for use of any information found herein/hereupon.