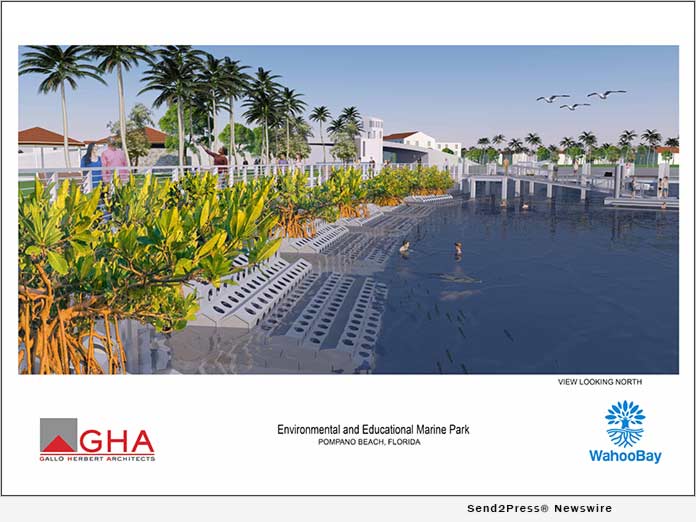 The team at Wahoo Bay collaborated with scientists and engineers from the University of Miami’s College of Engineering and the Rosenstiel School of Marine and Atmospheric Science with the hope that green engineering solutions will prove to be superior to traditional measures such as the controversial U.S. Army Corps of Engineers’ proposal to wall-off Miami against water.

“There are a variety of potential solutions being discussed to combat sea level rise and protect areas like South Florida from the impacts of flooding, erosion and wave attack,” explained Rob Wyre, Chairman of Shipwreck Park. “However, many of the options can be detrimental to the overall ecosystem. Wahoo Bay will play a critical role in helping scientists and government officials test the SEAHIVE system, while the park itself will create an environment for local, national and international scientific experiments and collaboration.”

The SEAHIVE™ configuration for Wahoo Bay combines a modular concrete structure with adequate complexity and material composition with mangroves. The projection is that the system will not only reduce flooding and erosion in the area but will be hospitable to sea life, creating an eco-laboratory for Wahoo Bay visitors.

“We are very excited to be collaborating with the team at Wahoo Bay,” said Landolf Rhode-Barbarigos, an assistant professor of Civil, Architectural and Environmental Engineering at the University of Miami who is part of the SEAHIVE™ development team. “They were very enthusiastic about implementing our research in Pompano Beach, and our discussions with Rob Wyre led to the idea of utilizing red mangroves in the design, resonating our ideas towards a ‘green-gray’ approach. Wahoo Bay will be an important test for the SEAHIVE system and will provide invaluable data as we search for the most viable solutions to preserve coastal areas.”

Wahoo Bay is a Shipwreck Park initiative that will be run by the City of Pompano Beach’s Parks and Recreation Department and supported by community volunteers.

This educational initiative is expected to begin construction this September and will cost more than $1 million to complete. Additional funding is required, donations can be made at https://wahoobay.org/donations-page/.

View More Boating Marine and Maritime News
"There are a variety of potential solutions being discussed to combat sea level rise and protect areas like South Florida from the impacts of flooding, erosion and wave attack," explained Rob Wyre, Chairman of Shipwreck Park. "However, many of the options can be detrimental to the overall ecosystem."

ABOUT THE NEWS SOURCE:
Wahoo Bay

Wahoo Bay is envisioned to provide an immersive experience for park visitors, especially young children. Its purpose is to raise awareness of the importance of keeping our oceans and reefs healthy and thriving in an entertaining, educational and memorable way. Shipwreck Park is a not-for-profit organization dedicated to the creation of an underwater park system establishing artificial reefs, utilizing public art to raise awareness of the need to preserve and conserve our natural coral reef system. Wahoo Bay is a Shipwreck Park initiative that will be run by the City of Pompano Beach's Parks and Recreation Department and supported by community volunteers. Wahoo Bay Foundation, is a not-for-profit, tax-exempt organization.

LEGAL NOTICE AND TERMS OF USE: The content of the above press release was provided by the “news source” Wahoo Bay or authorized agency, who is solely responsible for its accuracy. Send2Press® is the originating wire service for this story and content is Copr. © Wahoo Bay with newswire version Copr. © 2021 Send2Press (a service of Neotrope). All trademarks acknowledged. Information is believed accurate, as provided by news source or authorized agency, however is not guaranteed, and you assume all risk for use of any information found herein/hereupon.