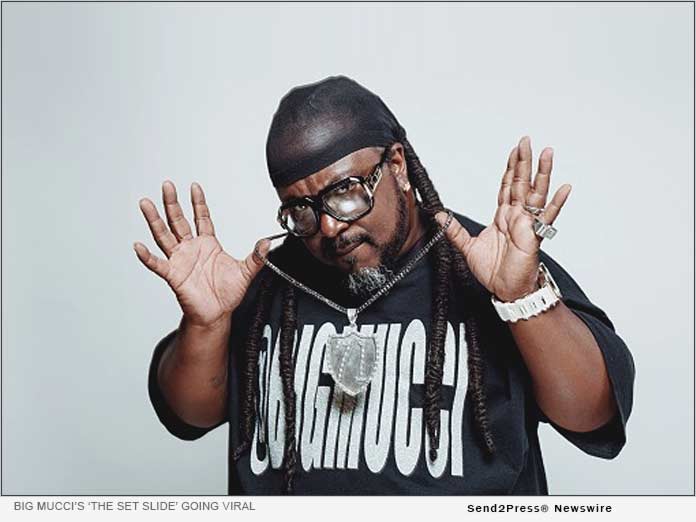 A 2014 production, “The Set Slide” is being given new life via TikTok, where the “Set Slide Line Dance Challenge” is making its way across the world.

“‘The Set Slide’ is a continuation of the ‘Bikers Shuffle.’ which was dedicated to the motorcycle community,” Big Mucci said. “After that came out, people in different sets, like clubs and social groups, kept coming up to me asking to make a dance for their clubs. I’m not in all those clubs, so this one is just dedicated to all the sets. I even put the roller skaters in there.”

The motivation behind Big Mucci’s music is to bring people of different backgrounds and ages together through line dancing.

“These groups of people love to do things together, and it’s a brotherhood and camaraderie,” he said. “‘The Set Slide’ came out in 2014, but ‘Bikers Shuffle’ has overshadowed it. That came out in 2009, and now it’s 2020, so I think people have done it so much they are looking for something new.”

The rebirth of “The Set Slide” is proven in its social media attention. “The Set Slide” video on Big Mucci’s TikTok page has exploded to more than 460,000 views, while the page itself, launched in mid-April, has grown to nearly 32,000 followers and more than 100,000 likes. “The Set Slide” on Spotify has swelled to 7,761 streams, a growth of more than 5,000 percent in the last month, and monthly, his Spotify has nearly 25,000 listeners.

“I put ‘The Set Slide’ on TikTok in the last week of April, and it just took on a whole new life,” Big Mucci said. “I put up a clip of me and my partner leading the dance, and people started doing it themselves and reposting it.

“During the pandemic, I wanted to give people something to do at home with their families. Line dance is also a form of exercise, so I think people saw that then went to my YouTube and found more dances they could do together in their living rooms.

Big Mucci’s ultimate goal with his music is to bring people together.

“The ‘Trail Riders Shuffle’ is also going viral,” he said. “That one is for trail riders and saddle clubs, which are mostly people in the south that ride horses. It’s big in Arkansas, Louisiana and Texas, and goes as far over as South Carolina. Thousands of them like to meet up, go on a horseback ride, then meet up in a field and party all night with music and vendors.”

Big Mucci’s other group-specific hits include his original debut in 1997, “Let Me See Dat Bootie Bounce,” “The Birthday Slide,” “ReBirth of the Shuffle,” “The Mickey James,” and the “Breast Cancer Awareness Shuffle.”

“I operate by the belief that if people show me love, I show them love back,” he said. “If I go to an event, I analyze what is going on and the people’s lifestyle, then I incorporate that into a song.

“The music itself makes me come up with the dances when I start grooving to it, and I always make my dances to where everyone can do them — from the little kids to the elders. It’s all about bringing unity and connecting everyone together.”

After 23 years in the business, Big Mucci said it’s amazing his career is still going.

“‘Bootie Bounce’ came out, and then ‘Cleveland Shuffle’ went global [and reached No. 44 on the top 100 Billboard Charts], and I’ve been doing this nonstop ever since,” he said.

The music will continue this year, as Big Mucci’s fifth studio album, “Big Mucci’s Line Dance Movement, Part III,” is set to drop by the end of 2020.

Born in Cleveland, the birthplace of Rock & Roll, Big Mucci served his country as a United States Marine. After returning home from serving his country, Big Mucci formed his line dance rap group 71 North Boyz in 1997. In 2004, he embarked on a successful solo career. Big Mucci is praised for the quality of his choreography, flow and beats for beginner and intermediate line dancing.

View More Music and Recording News
"The music itself makes me come up with the dances when I start grooving to it, and I always make my dances to where everyone can do them - from the little kids to the elders. It's all about bringing unity and connecting everyone together," said Big Mucci.

ABOUT THE NEWS SOURCE:
71 North Entertainment

Mark Wynn, with 71 North Entertainment, better known under his stage name Big Mucci is an American choreographer, producer, song writer and line dance entertainer. Born in birth place of Rock & Roll (Cleveland, Ohio) Big Mucci served his country as a United States Marine. After returning home from serving his country, Big Mucci formed his line dance rap group 71 North Boyz in 1997. In 2004 Big Mucci decided to go solo has since embarked on a successful solo career. Big Mucci is praised for the quality of his choreography, flow and beats that is considered as beginners and intermediate line dances (meaning easy for everyone can do).

LEGAL NOTICE AND TERMS OF USE: The content of the above press release was provided by the “news source” 71 North Entertainment or authorized agency, who is solely responsible for its accuracy. Send2Press® is the originating wire service for this story and content is Copr. © 71 North Entertainment with newswire version Copr. © 2020 Send2Press (a service of Neotrope). All trademarks acknowledged. Information is believed accurate, as provided by news source or authorized agency, however is not guaranteed, and you assume all risk for use of any information found herein/hereupon.