NEW YORK, N.Y., Feb. 26, 2018 (SEND2PRESS NEWSWIRE) — When recording artist Tiffani LeBlanc dropped her first hit, “Kinda High” in 2017, music fans took notice of not only her soaring vocals but also her dramatic sense for fashion and style. The new artist continues to gain heat as she drops her latest track, “Let’s Party” a feel-good anthem for fun times. 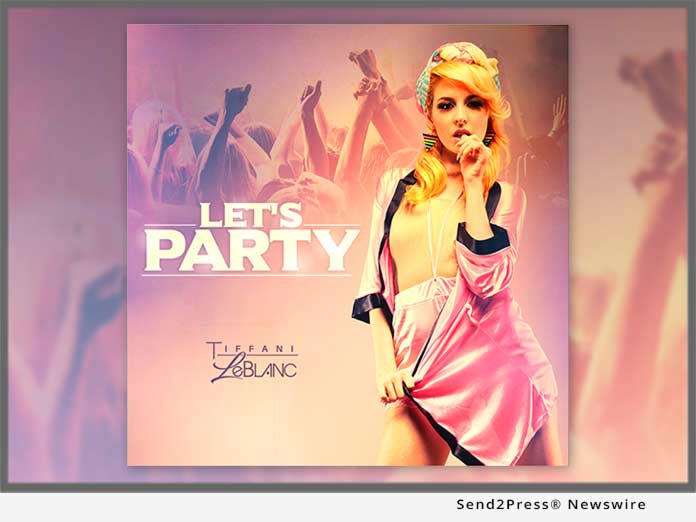 “Let’s Party” is already being added to Top 40 Billboard reporting playlists on stations across the country in markets such as California, Miami and Atlanta. The upbeat pop tune positions the young songstress as a #PartyPrincess whose reign has just begun.

A natural performance artist, Tiffani boasts the confidence of a woman who has always known just what she wants. When just three years old, she would walk around in her mother’s heels singing everything from R&B and hip hop to pop to classic rock. In the early 2000s, she began making her voice heard performing at an array of events, including musical theater competitions and opera shows. In 2010, she won the critic’s choice award in the Florida State Thespian festival.

The music video “Let’s Party,” directed by Joan Pabon, captures Tiffani’s wild woman essence and rebellious attitude. Influenced by trailblazers like Madonna, Lady Gaga, Drake, and Emmylou Harris, Tiffani LeBlanc is the #PartyPrincess for the new millennial generation. As she continues to hone her unique sound incorporating hip hop, pop, dance, and R&B, music fans will continue to bow down to her reign.

ABOUT THE NEWS SOURCE:
Tiffani LeBlanc

Tiffani LeBlanc is the definition of good vibes, integrity, innovation, style, and pure talent. Her wicked sound and voice expresses an atmosphere that captivates a diverse audience. In 2010, Tiffani won the critic’s choice award in the Florida State Thespian’s festival. Tiffani LeBlanc’s career took off with the release of her first single "Kinda High" in 2016. After its success, Tiffani LeBlanc signed with label Wonda Music Inc.

LEGAL NOTICE AND TERMS OF USE: The content of the above press release was provided by the “news source” Tiffani LeBlanc or authorized agency, who is solely responsible for its accuracy. Send2Press® is the originating wire service for this story and content is Copr. © Tiffani LeBlanc with newswire version Copr. © 2018 Send2Press (a service of Neotrope). All trademarks acknowledged. Information is believed accurate, as provided by news source or authorized agency, however is not guaranteed, and you assume all risk for use of any information found herein/hereupon.