SAN ANGELO, Texas, Sept. 28, 2016 (SEND2PRESS NEWSWIRE) –- Donald Eugene Lowe started working on his presidential campaign in 2013. To date, he has spent less than $20,000 and he’s not about to give up now. In fact, he says he’s just getting started. “It’s possible,” Lowe says. “There are many voters who do not like Hillary Clinton or Donald Trump and that puts me in a very good position. According to my calculations, I have a 52 percent chance of winning.” 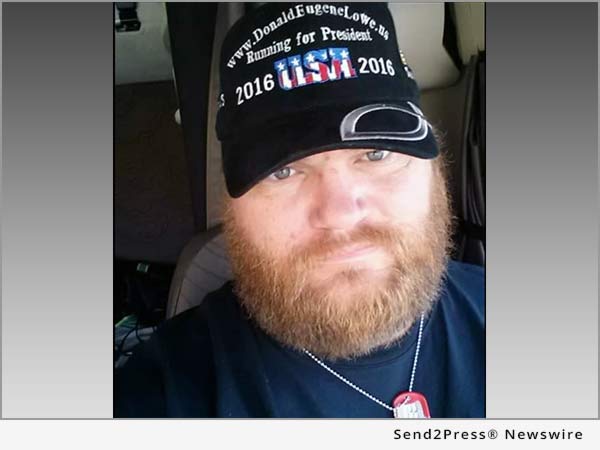 How is this possible? Lowe explains that he is skipping the general election and instead focusing on winning the Electoral College.

“I’m working to beat these candidates at their own game,” he says.

The Electoral College consists of 538 electors. A majority of 270 electoral votes is required to elect the President. A state’s entitled allotment of electors equals the number of members in its congressional delegation: one for each member in the House of Representatives plus two for senators.

So, while it’s rare for Electors to disregard the popular vote by casting their electoral vote for someone other than their party’s candidate, it’s not impossible.

After being turned down by the Republican Party for his request for a brokered convention like they used to have for candidates who could not afford a large campaign, Lowe continued to forge ahead.

“While the Republican Party made it impossible for me to run in the general election, they can’t eliminate me from the Electoral College,” Lowe says. “And, after campaigning at more than 700 locations and traveling more than 400,000 miles, I’m not about to give up now. I might be the only candidate running for the Electoral College and skipping the general election and that’s okay. It’s America after all – it’s a place where dreams come true.”

DISCLAIMER: This press release is paid for by Donald Eugene Lowe.

View More Elections and Politics News
“While the Republican Party made it impossible for me to run in the general election, they can’t eliminate me from the Electoral College,” Lowe says.