SAN FRANCISCO, Calif., Oct. 1, 2020 (SEND2PRESS NEWSWIRE) — Robocorp announces its latest release – Robocorp Cloud – which for the first time ever – allows IT developers and programmers to orchestrate and run robots straight from the cloud. This new technology significantly improves the way Robotic Process Automation (RPA) developers and their teammates operate and maintain their software robot workforce.

Teams can now run processes in the cloud virtually and concurrently, manage jobs triggered via Application Programming Interface (API) calls, monitor progress with real-time reporting and dashboards and get notified if robots fail for any reason. And, it can all be done from a browser in one intuitive platform.

“At Robocorp, we see a massive potential for RPA to help every business,” Patrick Moran, CMO, says. “That’s why we have reimagined RPA as open-source tool, license-free with a cloud-native orchestration platform. It’s the future of RPA.”

Jobs that are particularly well-suited for the cloud include several, small and repetitive tasks such as shepherding data between systems to triaging support tickets; complex processes that interact with many cloud apps and external APIs; and large, high-volume processes. 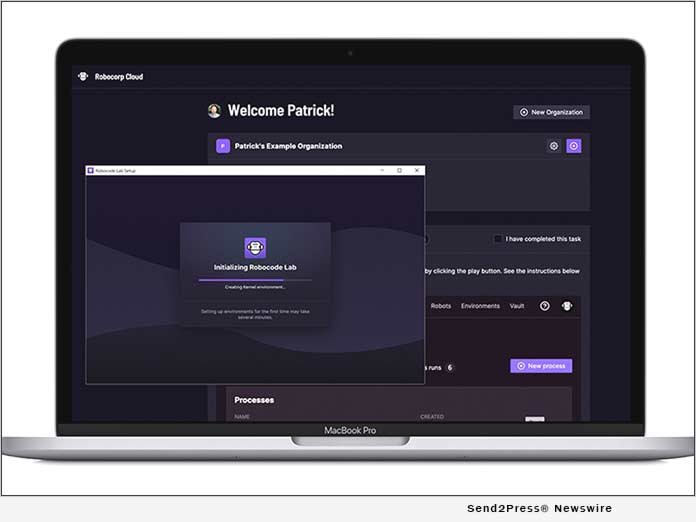 With Robocorp Cloud, robots can complete tasks in parallel and with 100 percent accuracy, freeing up an organization’s time and resources for more important work.

And, the platform is so easy to use. Developers can begin implementing it immediately by following a quick start guide that includes four steps:

In addition to ease of use, as part of Robocorp’s mission to democratize and accelerate the use of RPA by every business, it’s offering the most simplified pricing model in the industry. There are no complex licensing schemes or prohibitive limitations. Once the software robots are set up, users will only pay for the time that robot takes to complete its task. So, for example, if it takes 10 minutes to complete an employee onboarding process automation, the cost is just 50 cents (.5 cents per minute).

Robocorp has even bigger ideas for what it can eventually help developers and programmers do with the robots (e.g., harnessing artificial intelligence and machine learning). The Robocorp Cloud is just one more tool to propel them into the future.

A fast-growing, U.S.-based company with primary offices in Finland, Robocorp’s product mission is straightforward. It makes it easy, affordable and fast for developers to build software robots and automate manual tasks with first-class, open-source tools. It also provides a robust, secure orchestration and execution platform to allow customers to affordably run robotic automation without ever having to install anything on a local computer. Robocorp is set out to change RPA and has the potential to change how millions of people work every day.

ABOUT THE NEWS SOURCE:
Robocorp

A fast-growing, U.S.-based company with primary offices in Finland, Robocorp's product mission is straightforward. It makes it easy, affordable and fast for developers to build software robots and automate manual tasks with first-class, open-source tools.

LEGAL NOTICE AND TERMS OF USE: The content of the above press release was provided by the “news source” Robocorp or authorized agency, who is solely responsible for its accuracy. Send2Press® is the originating wire service for this story and content is Copr. © Robocorp with newswire version Copr. © 2020 Send2Press (a service of Neotrope). All trademarks acknowledged. Information is believed accurate, as provided by news source or authorized agency, however is not guaranteed, and you assume all risk for use of any information found herein/hereupon.