SAN JOSE, Calif., Jan. 18, 2019 (SEND2PRESS NEWSWIRE) — According to the Human Rights Association for Forced Conversion (HAC), Northern California Branch, on December 30th, Ms. Gu Ji-in, a 25 year old women was found dead at a lodging in Hwasun; a victim of a coercive conversion program. The Hwasun Police Department confirmed an investigation and the woman’s parents were questioned about their involvement in the confinement and death of their daughter. 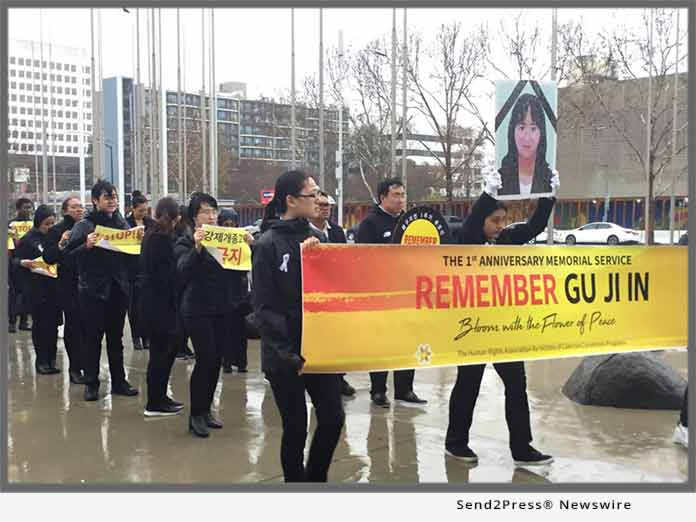 Police statement claimed autopsy showed the possibility of suffocation and a high possibility of cardiopulmonary arrest due to oxygen deprivation. So Koreans did what they do best, protesting to bring awareness of Human rights violation and discrimination of freedom of religion.

The people have begun petitioning for the protection of religious freedom protected by the Constitution of South Korea, Article 20. Sunday, January 28th, 140,000 people attended a protest in Seoul to speak against Coercive Conversion Education. The purpose of the demonstrations was to bring awareness of the situation and to petition for a legal framework criminalizing religion-based violence. According to reports from Human Rights Association for Forced Conversion (HAC), a Korean civil society NGO, Coercive Conversion Education was performed on more than 1,000 individuals, by a small group of Korean pastors.

Organizations such as the Association of Victims of Coercive Conversion Programs have reached out to international human rights groups to spread awareness. Through this petition, all branches of the Human Rights Association for Forced Conversion (HAC), within many countries, have gone out nationwide spreading this awareness to all the citizens, groups, and media; as well as to the United Nations.

On January 6st, 2019, People across the countries gathered together in membrane of the Death of Ms. Gu Ji-In and held the 1st Anniversary Memorial Service. Beginning from Korea, this memorial service has become a viral sensation, and is continuing to spread across the world. Human rights organizations across the nation, banning together with other organizations and groups from multiple countries, such as, the Philippines, Germany, Japan, Australia, Republic of South Africa, Uganda, Kenya, Netherland, France, Malaysia, Indonesia, and the United States. All has taken part in the cause of banning the practice of coercive conversion and all the solidarity displayed through the events taken place around the world will be heard across the nations.

Los Angeles, San Francisco, and San Jose, California, Washington D.C., and New York are some of the States that are becoming active within the newly establish HAC.

Due to the growing number of Korean Residents in various community of California and across the united states, the effect of the religious discrimination, human rights, and the practice of Coercive Conversion has become more revealed. How can we allow this to continue and to be ignored?

That is why the HAC of San Jose and San Francisco branch combined forces and practices their rights of Freedom of Speech and bringing awareness of the Forced Conversion of Religion at the San Jose city Hall.

The Human Rights Association for Forced Conversion (HAC), Northern California Branch, combines the HAC of San Jose and San Francisco branches; and practices their rights of Freedom of Speech and bringing awareness of the Forced Conversion of Religion.

LEGAL NOTICE AND TERMS OF USE: The content of the above press release was provided by the “news source” Human Rights Association for Forced Conversion Northern California or authorized agency, who is solely responsible for its accuracy. Send2Press® is the originating wire service for this story and content is Copr. © Human Rights Association for Forced Conversion Northern California with newswire version Copr. © 2019 Send2Press (a service of Neotrope). All trademarks acknowledged. Information is believed accurate, as provided by news source or authorized agency, however is not guaranteed, and you assume all risk for use of any information found herein/hereupon.