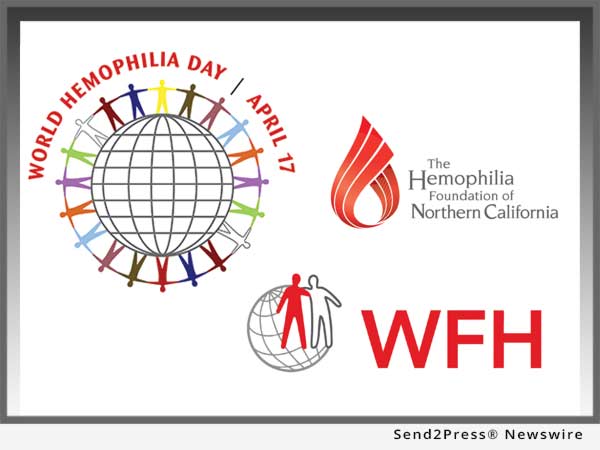 On April 17, at 7:30 p.m. on the steps of San Francisco City Hall, HFNC, and the National Hemophilia Foundation (NHF), and families and friends affected by bleeding disorders will gather to celebrate as City Hall is illuminated in red to show support for the millions of people around the world living with a bleeding disorder. HFNC is asking all who wish to show support to join them on the steps of City Hall and to wear red in support of the cause.

World Hemophilia Day is an opportunity to raise awareness of people living with hemophilia and other inheritable bleeding disorders around the world. The “Lighting It Up Red!” campaign seeks to create a visual reminder of the global bleeding disorders community as well as the organizations such as HFNC, who provide support for local individuals and families affected by bleeding disorders.

About Bleeding Disorders:
Bleeding disorders, a group of disorders that share the inability to form a proper blood clot, include hemophilia, von Willebrand disease (VWD) and rare factor disorders. They are characterized by extended bleeding after injury, surgery, trauma or menstruation. Improper clotting can be caused by defects in blood components such as platelets and/or clotting proteins, also called clotting factors. Currently there are no cures for bleeding disorders and treatment for these conditions varies, depending on their severity. Worldwide, nearly 70 percent of people affected by bleeding disorders have no access to treatment.

ABOUT THE NEWS SOURCE:
Hemophilia Foundation of Northern California

The Hemophilia Foundation of Northern California is a non-profit, volunteer-run organization serving the needs of people with hemophilia and related bleeding disorders such as Von Willebrand Disease. HFNC is dedicated to improving the lives and increasing the independence of kids and families challenged by bleeding disorders. Since 1958, the grassroots organization has worked at the local level, providing consistent support, education, community-building programs, healthcare advocacy and impartial referrals. From Family Camp and Camp Hemotion for kids to Educational Symposiums, HFNC’s donor-supported programs make a direct and life-changing impact on the lives of over 2,000 Northern California residents and their families.

LEGAL NOTICE AND TERMS OF USE: The content of the above press release was provided by the “news source” Hemophilia Foundation of Northern California or authorized agency, who is solely responsible for its accuracy. Send2Press® is the originating wire service for this story and content is Copr. © Hemophilia Foundation of Northern California with newswire version Copr. © 2017 Send2Press (a service of Neotrope). All trademarks acknowledged. Information is believed accurate, as provided by news source or authorized agency, however is not guaranteed, and you assume all risk for use of any information found herein/hereupon.