Scientology Volunteer Ministers: Help to an Island in Need

LOS ANGELES, Calif., June 15, 2021 (SEND2PRESS NEWSWIRE) — For 16 days, a team of Scientology Volunteer Ministers from Florida, arranged by the Freewinds, the Church of Scientology religious retreat, came to the aid of the people of St. Vincent and the Grenadines. 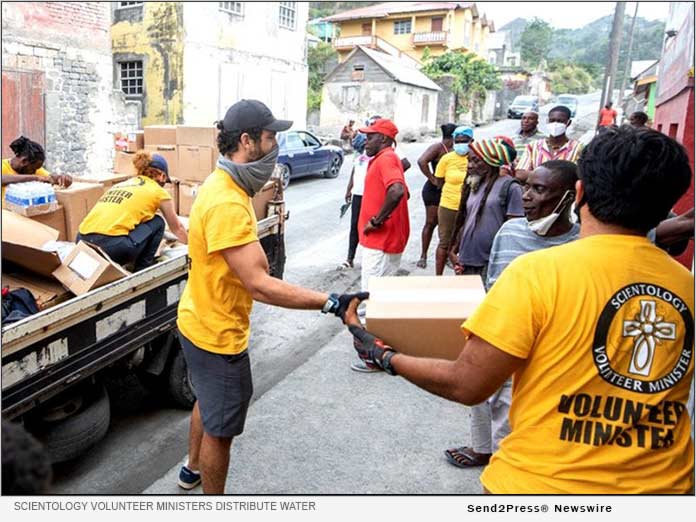 When La Soufrière Volcano erupted, engulfing the island with pyroclastic flows, volcanic ash and rock, it created a humanitarian crisis. Upwards of 16,000 residents who evacuated and thousands more who remained in the red and orange zones were without fresh water, power, and food.

“It’s like a desert, it’s desolate, it’s apocalyptic,” said Ralph Gonsalves, prime minister of St. Vincent and the Grenadines. Unable to cope with the humanitarian effort needed without substantial assistance, he reached out for help, saying, “We are really at the midnight hour of need.”

The Freewinds, the Church of Scientology religious retreat and humanitarian ship in the Caribbean, immediately responded to the call for help. The ship sent a 40-foot container to Kingstown, the capital, chief port, and main commercial center of Saint Vincent and the Grenadines. And to help ensure these and other urgently needed supplies reached those in need, the Freewinds arranged a team of volunteers. 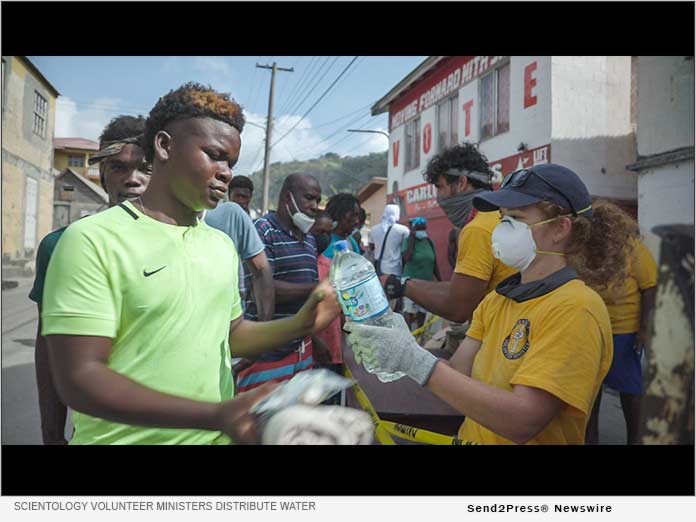 Smoke continued to billow from the summit of La Soufrière as the team of Florida-based Scientology Volunteer Ministers landed in St. Vincent. Everything was grey: The sky, the streets, the hillsides. Ash overwhelmed the islands.

On arriving, these Scientologists, veterans of numerous disaster response missions, immediately coordinated their activities with other nonprofits.

“Working with the Red Cross, we brought support to the leeward side of the island—the first relief they received since the eruptions,” said the leader of the La Soufrière Scientology Volunteer Ministers Response Team. That day, they handed out six pallets of water in gallon jugs, 36 tool kits that included shovels, hammers and crowbars, 300 hygiene kits, blankets, and some 600 masks.

Coordinating with the National Emergency Management Organisation (NEMO), the Scientology Volunteer Ministers found that although supplies were pouring in to the island, they had to be organized for distribution. The Scientologists worked in the warehouse, making it possible for four tons of supplies to reach those who needed them.

The Scientologists were surprised to find that despite the warm weather of the island, one of the most needed items was blankets. “Their mattresses were so covered with ash that clean blankets were the only way to have something to sleep on,” said the lead Volunteer Minister.

To reach the north of the island, the Scientology team rented a motorboat. In the towns of Owia and Fancy, the Volunteer Ministers distributed water and supplies to the residents who had stayed. The towns were not only blanketed in ash, they had also been battered by rocks of all sizes from pebbles to boulders that collapsed roofs and tore up the roads.

In Georgetown, residents told the Scientology Volunteer Ministers that in the month since the volcano erupted, theirs was the first aid to reach them.

In all, the volunteers distributed more than 22 tons of supplies including enough food for 7,000 meals. And they let the Vincentians know that they had not been forgotten.

“They have a special hand signal here,” said the lead Scientology Volunteer Minister. “It’s a closed fist with the thumb out to the side. It means ‘respect.’ Pretty much everywhere we drove, people were making this sign for us, shouting ‘thank you for what you are doing, thank you for being here.’” The Scientology Volunteer Ministers want to share that thanks to those who made it all possible by donating goods and funds to help the island recover.

L. Ron Hubbard is the Founder of the Scientology Religion and Mr. David Miscavige is the religion’s ecclesiastical leader.

View More Global Aid and Disaster Relief News
"Working with the Red Cross, we brought support to the leeward side of the island-the first relief they received since the eruptions," said the leader of the La Soufriere Scientology Volunteer Ministers Response Team.