MAYFIELD, Ky., Dec. 28, 2021 (SEND2PRESS NEWSWIRE) — Scientology Volunteer Ministers came from across the country to help a town destroyed by the 10 December tornado celebrate the holiday. “Thank you for bringing some happiness,” an elderly couple called out to a Volunteer Minister as they walked up to the bright yellow tent in Mayfield, Kentucky, on Christmas Day. 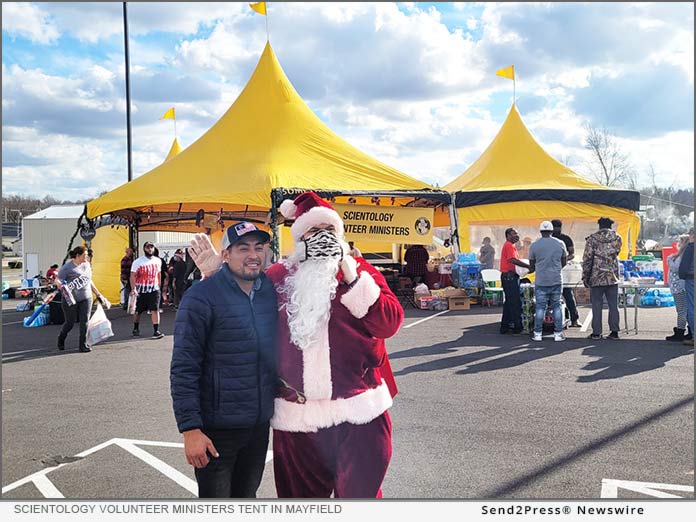 Santa, who drove to Mayfield from the Church of Scientology of Nashville, was not prepared for the kind of reactions he got.

“Dozens of children came by today,” said Santa. Some kids were too shy to come up to him, but others were eager to see what he had for them. “I think the parents were even more excited than the kids.”

He would keep pulling things out of his bag until he got the reaction he was looking for.

“For one little boy, about 3 feet tall, I pulled out a stuffed horse. No interest. I pulled out this two-foot plush octopus half the size that he was, and he was elated.”

For the boy’s sister, Santa found a giant tie-dyed frog. “She gave it a huge hug as soon as it came out of the bag.”

Sometimes, standing in the street, he’d see people driving by looking so downcast. “I’d wave at them and say ‘Ho Ho Ho!’ and they couldn’t help but smile.”

A retired Marine donated hundreds of toys for the children’s table in the Volunteer Ministers tent “so the kids would have Christmas.”

“It’s like everybody is helping everybody,” he said, wiping tears from his eyes. “It’s the best Christmas I’ve ever had. In the state of the world these days, out of all this chaos, to see what people are doing to help each other instead of stepping on each other, there’s hope for mankind yet. It’s been an experience. I hope I never see anything like this again, but to live through it and to see what it has done to people, and people helping each other — there’s more good coming out of it than bad. It’s been a Christmas like no other. It ain’t about the toys, it ain’t about the stuff you get. It is about what you can do. It’s been fulfilling.”

In addition to the toys and serving a special dinner for Christmas Eve and Christmas Day, the Volunteer Ministers, working with other charities, have served more than 30,000 meals to local residents and volunteer workers.