BROOKLYN, N.Y., April 26, 2017 (SEND2PRESS NEWSWIRE) — Smokers’ rights group NYC Citizens Lobbying Against Smoker Harassment (C.L.A.S.H.) was courteously extended a personal invitation by the office of the NYC Council to attend and provide testimony at the Health Committee hearing being held Thursday on a package of ten anti-smoker proposals. The invitation was initially accepted but now we decline. 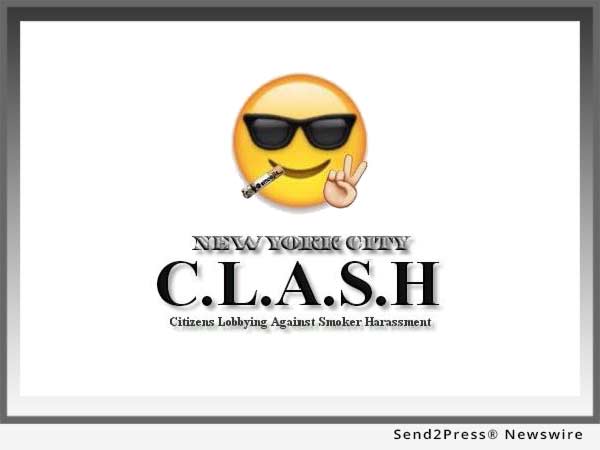 Of course we were assured it would never come to that. But today, this hearing includes a bill to ban smoking inside apartments of city-financed apartment buildings and another creates the conditions for privately owned multi-unit dwellings to consider doing the same by forcing owners to single out the subject of smoking in lease documents.

Our previous concerns vindicated we now stand by our word that airing objections at what amounts to no more than a pro forma proceeding on a preordained conclusion is not only a waste of time but beneath our dignity. Rather, C.L.A.S.H.’s position, as further stated at that last time at bat, is to advocate peaceful individual resistance. Good men disobey bad laws. One need only to take a stroll in a park or on a beach today to see this is what has unfolded.

While C.L.A.S.H. will not be physically present at the hearing, testimony will be submitted on paper for the sake of the historical documentation of our objections. For the record, it will include the following:

Congratulations for giving police officers a beautiful way to get around the clamp down on stop, question and frisk! Pulling people over for something as inane as smoking as an excuse to probe for more is a gift. I should know. I’m retired NYPD.

Congratulations for putting more minorities out of their homes to loiter on the sidewalks and attract the attention of the police while the more affluent get to remain comfortably and safely in their homes!

Congratulations for increasing the number of “buttleggers” ready to meet the demand for lower cost smokes (New York already has the highest rate of cigarette smuggling at over 55%).

So congratulations too for making it easier for minors to buy cigarettes! Teens know better than anyone else where to get “the goods.” (Where do you think they get their pot?) And unlike stores no carding!

Congratulations for helping to fund terrorism and using those minors and adults to do so! Terror-tied individuals are well known to take advantage of this lucrative endeavor created by our politicians. Better a bomb that no one invites than freedom to make an invited, informed legal choice, right?

Congratulations for creating an even greater incentive to burglarize and rob bodegas and convenience stores! Many times the details in a news report include the fact that cartons of cigarettes were targeted during these crimes. And hey, that’s more illicit street sales to minors. Way to go!

And a really hearty handshake and congratulations for beating out your competitor – the tobacco industry – by making more money off the sale of a pack of cigarettes than they do! Who is it really that is in the business of selling cigarettes these days?

Just last week the NY Times reported how Iraqis, liberated from ISIS control, expressed their joy. The headline read, “After ISIS, Smoking Openly to Feel Free.” Our sentiments exactly. It’s a matter of being let alone to live freely rather than the way demanded by a group in power.

About NYC C.L.A.S.H.:
Citizens Lobbying Against Smoker Harassment is a grassroots organization established in 2000 dedicated to advancing and protecting the interests of adults who choose to smoke cigarettes or enjoy other forms of tobacco or use electronic cigarettes.

View More Opinion and Commentary News
C.L.A.S.H. founder, Audrey Silk, recalls, "At the end of 2010 when I testified against the council's plan to ban smoking in parks and on beaches I ended my statement with this: Approve this and soon I'll be here again testifying against your plan to ban smoking in homes. Well I don't think so."

ABOUT THE NEWS SOURCE:
NYC Citizens Lobbying Against Smoker Harassment

NYC Citizens Lobbying Against Smoker Harassment (NYC CLASH) is a grassroots organization established in 2000 dedicated to advancing and protecting the interests of adults who choose to smoke cigarettes or enjoy other forms of tobacco or use electronic cigarettes.

LEGAL NOTICE AND TERMS OF USE: The content of the above press release was provided by the “news source” NYC Citizens Lobbying Against Smoker Harassment or authorized agency, who is solely responsible for its accuracy. Send2Press® is the originating wire service for this story and content is Copr. © NYC Citizens Lobbying Against Smoker Harassment with newswire version Copr. © 2017 Send2Press (a service of Neotrope). All trademarks acknowledged. Information is believed accurate, as provided by news source or authorized agency, however is not guaranteed, and you assume all risk for use of any information found herein/hereupon.