BRONX, N.Y., May 17, 2018 (SEND2PRESS NEWSWIRE) — Casita Maria Center For Arts & Education and Bronx Music Heritage Center are proud to present the South Bronx Culture Trail Festival 2018: Somos Unidos. This fun, family-friendly festival celebrates the rich cultural contributions of the communities that make the South Bronx their home. In partnership with community based organizations, city agencies and charities, multiple events will be held throughout the South Bronx from May 31 through June 23, 2018 uniting communities, arts, culture, and wellness while promoting civic engagement.

Events will showcase both traditional roots and fusion art forms including music, dance, visual art, crafts, puppetry, theater and culinary arts that reflect the artistic ecosystem of the Bronx. In unity there is strength. All events are rain or shine.

The South Bronx Culture Trail Festival (SBCT) is a community arts and education initiative established in 2011 by Casita Maria Center for Arts & Education and Dancing in the Streets that celebrates and captures key moments in the cultural life of the South Bronx. Each year a cohort of partners are invited to contribute to this ever evolving and robust history to visualize a Trail through the neighborhoods of the South Bronx.

In addition to a cultural celebration, SBCT serves as an economic engine for the community through the hiring of local artists and the promotion of local businesses and tourism to the borough.

“Casita Maria is incredibly proud to lead the development of the South Bronx Culture Trail Festival 2018 in partnership with the Bronx Music Heritage Center, which celebrates the borough’s rich and diverse culture with Latin jazz, bomba y plena, hip hop, and Garifuna music and so much more,” says said Haydee Morales, Executive Director. “The Festival is a testament to the rich and plentiful talent in the Bronx, as well as an appreciation to the resilient community that continues to give birth to emerging cultural movements.” 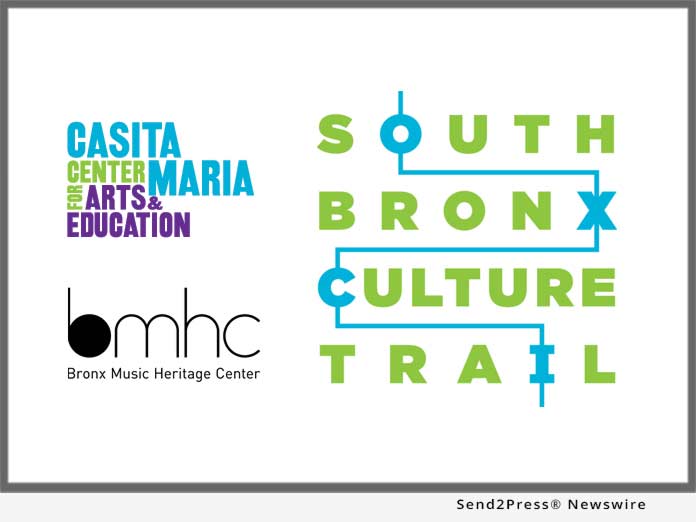 “The Bronx has an incredible legacy of art and music for its residents to be proud of and which we want to show off to everyone else. The South Bronx Culture Trail and all the participating organizations prove that the Bronx is indeed, RISING!” said Elena Martinez, Folklorist & Co-Artistic Director, Bronx Music Heritage Center.

About Casita Maria:
Casita Maria Center For Arts & Education is the first and oldest Latino 501(c)(3) charity in NYC, founded in 1934. The South Bronx-based community arts and educational organization presents diverse, contemporary visual and performing arts and education programming for all ages.

Special thanks to Digital Bodega for filming and post production work and Sal Gigante for the the use of the St. Athanasius Church Courtyard.

View More Entertainment News
"The Festival is a testament to the rich and plentiful talent in the Bronx, as well as an appreciation to the resilient community that continues to give birth to emerging cultural movements," says said Haydee Morales, Executive Director.

More from Casita Maria Center for Arts and Education

ABOUT THE NEWS SOURCE:
Casita Maria Center for Arts and Education

Casita Maria Center for Arts & Education ("Casita Maria"), headquartered in the South Bronx, was established in 1934 by Claire and Elizabeth Sullivan as the first charitable organization to serve Latinos in New York City. Operating from a five-room tenement apartment in East Harlem, the Sullivan sisters, public school teachers who were also relatives of TV personality Ed Sullivan, had a primary mission to offer after school enrichment and recreational activities for the children of newly arrived families from Puerto Rico.

LEGAL NOTICE AND TERMS OF USE: The content of the above press release was provided by the “news source” Casita Maria Center for Arts and Education or authorized agency, who is solely responsible for its accuracy. Send2Press® is the originating wire service for this story and content is Copr. © Casita Maria Center for Arts and Education with newswire version Copr. © 2018 Send2Press (a service of Neotrope). All trademarks acknowledged. Information is believed accurate, as provided by news source or authorized agency, however is not guaranteed, and you assume all risk for use of any information found herein/hereupon.