STAMFORD, Conn., Aug. 12, 2020 (SEND2PRESS NEWSWIRE) — Throughout Mark Schwartz’s 35-year career as a successful women’s shoe designer, he has always secretly wanted to design and make handmade men’s shoes. Now, he’s done it and his new men’s shoes collection will be available this fall/winter. 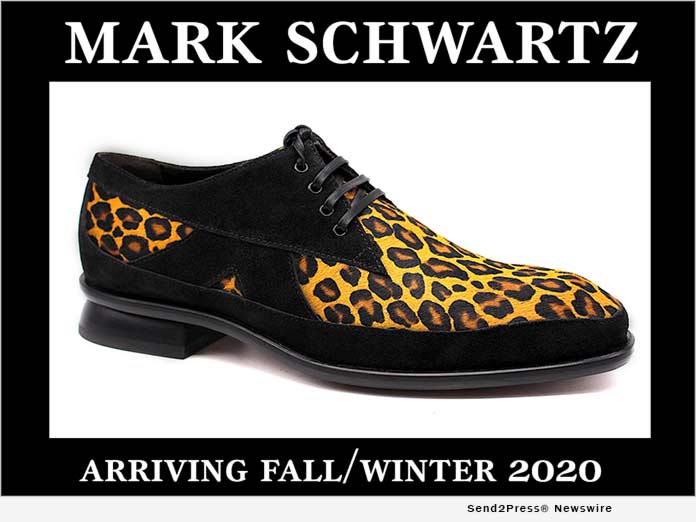 Part of the reason Schwartz launched this collection is self-serving. Since he can’t wear the 4-inch signature high heels he’s famous for, this new men’s shoe collection allows him to indulge in creating some of the most creative, unique and best quality men’s shoes on the market.

His shoe designs have graced the top fashion runways of Paris, Milan and New York and they’ve also appeared in the pages of Vogue, Elle and W Magazine.

All of Schwartz’s shoes are handmade in Italy with strict detail and attention to fit and design. His new men’s shoe collection includes six styles ranging from loafers to ankle boots. The physical designs are classical with a twist. He pays special attention to the actual heel detail because he recognizes that heel shapes and placements are critical to any good design.

Schwartz’s signature heel is not attached in the usual way that men’s shoes are typically done. Instead, he takes a cue from his women’s shoe designs and attaches the heel separately and leaves space around it. This gives the illusion of lightness, but the heel itself is masculine.

“Men who wear these shoes will be known for their fashion sense,” Schwartz says.

These shoes have bold details that include pockets, newly-mixed leather colors and fabric textures to make a standout statement that fashion matters for men too.

“Shoes are the most artistic and important accessory in a wardrobe,” he says.

A hands-on designer, Schwartz works in the shoe factory to ensure that each stitch is perfect. He also takes custom orders on select styles for clients who want a special color, leather material or height.

As a young man in the early 1980s, Schwartz launched his shoe design career by assisting shoe design master, Roger Vivier. Within two years, he became the creative director for Roger Vivier International and helped with the design of many eclectic collections during his seven years with the company.

During his time there, he was introduced to many influential players in the New York art scene, most importantly Andy Warhol, who mentored Schwartz until his death. Warhol urged him to paint his shoe designs and the two would meet a few times each month to exchange ideas and talk about shoes and art. Schwartz continues to be influenced by Warhol today and imprints art in all of his shoes.

A seasoned interviewee, Schwartz is available for live interviews to discuss his history of shoe designing, his shoe art with Andy Warhol and this new men’s shoes collection.

View More Fashion Industry News
"Men who wear these shoes will be known for their fashion sense," Schwartz says.

ABOUT THE NEWS SOURCE:
Mark Schwartz

As a young man in the early 1980s, Mark Schwartz launched his shoe design career by assisting shoe design master, Roger Vivier. Within two years, he became the creative director for Roger Vivier International and helped with the design of many eclectic collections during his seven years with the company. Schwartz has designed shoes for Barney's, Bergdorf Goodman, Cleo Bottier, and Neiman Marcus.

LEGAL NOTICE AND TERMS OF USE: The content of the above press release was provided by the “news source” Mark Schwartz or authorized agency, who is solely responsible for its accuracy. Send2Press® is the originating wire service for this story and content is Copr. © Mark Schwartz with newswire version Copr. © 2020 Send2Press (a service of Neotrope). All trademarks acknowledged. Information is believed accurate, as provided by news source or authorized agency, however is not guaranteed, and you assume all risk for use of any information found herein/hereupon.