The Minimoog, created in 1970 by R.A. Moog Inc., is a portable synthesizer that featured the most often used aspects of the Moog modular synthesizers — simplified and repackaged for use by musicians who sought basic electronic sounds in a more expressive and portable package. This compact synthesizer, with its functional design and great sound, caused a musical instrument revolution which left no genre of music untouched by synthesis. Even today, despite amazing advancements in technology and 43 years of synthesizer production from many companies, many keyboard players consider the Minimoog to be the best synthesizer ever made.

Gary Numan, best known for his hits “Are ‘Friends’ Electric” (as Tubeway Army) and “Cars,” and now enjoying a resurgence in his career, performed at the Mountain Oasis Electronic Music Summit in October of 2013 and signed the synthesizer while visiting backstage with the Bob Moog Foundation. This is a once-in-a-lifetime chance not only to own a vintage Minimoog, but to own what might be the only Minimoog ever signed by Gary Numan.

The Minimoog being offered, serial number 4245, has been modified by Rich Walborn, former Chief Engineer at Moog Music, Inc. (Buffalo), with the following:

* CV and Gate Out jacks: This Minimoog, unlike a stock Minimoog, or even a Voyager, can control other synthesizers via CV, allowing you to play them with the Minimoog’s keyboard

* Bend: the ability to change the range of the pitch wheel has been vastly augmented

This raffle is a once-in-a-lifetime opportunity; a chance to own the most sought-after vintage synthesizer of all time for a mere $20; a chance to have what might be the only Minimoog ever signed by popular electronic music icon Gary Numan; a chance to have a synthesizer modified by Moog engineer-to-the-stars, Rich Walborn; but most of all, the opportunity to support Bob Moog’s legacy by supporting the educational work of the Bob Moog Foundation.

More information about the raffle can be found at http://www.bobmoogfoundation.org/.

Tickets can be purchased directly at: http://bit.ly/I4QTd8 (shortlink to BMF Store page).

The Bob Moog Foundation (www.bobmoogfoundation.org) honors the legacy of synthesizer pioneer Bob Moog through its mission of igniting creativity at the intersection of music, history, science, and innovation. Its projects include Dr. Bob’s Sound School, a nine-week curriculum teaching the science of sound through the magic of music, the Archive Preservation Initiative, an effort to preserve and protect an extensive and historic collection of archival materials that help tell the history of electronic music genre, and a future museum where the first two initiatives will converge. The Bob Moog Foundation is an independent, donor-driven 501(c)(3) non-profit organization. It is not affiliated with Moog Music, Inc.

Minimoog® is a registered trademark of Moog Music, Inc. The Bob Moog Foundation is an independent, non-profit 501(c)(3) dedicated to promoting the legacy of Dr. Bob Moog, and is not affiliated with the companies referenced above. 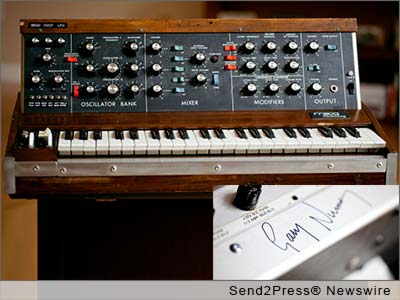 NEWS ARCHIVE NOTE: this archival news content, issued by the news source via Send2Press Newswire, was originally located in the Send2Press® 2004-2015 2.0 news platform and has been permanently converted/moved (and redirected) into our 3.0 platform. Also note the story “reads” counter (bottom of page) does not include any data prior to Oct. 30, 2016. This press release was originally published/issued: Wed, 20 Nov 2013 13:46:27 +0000

More from The Bob Moog Foundation

ABOUT THE NEWS SOURCE:
The Bob Moog Foundation

LEGAL NOTICE AND TERMS OF USE: The content of the above press release was provided by the “news source” The Bob Moog Foundation or authorized agency, who is solely responsible for its accuracy. Send2Press® is the originating wire service for this story and content is Copr. © The Bob Moog Foundation with newswire version Copr. © 2013 Send2Press (a service of Neotrope). All trademarks acknowledged. Information is believed accurate, as provided by news source or authorized agency, however is not guaranteed, and you assume all risk for use of any information found herein/hereupon.