"Putting a Universal Adult Risk Assessment for TB into the hands of medical providers will help them identify who is most at risk for getting sick with TB," says CTCA Communications Committee Chair Julie Vaishampayan, MD, MPH.

OAKLAND, Calif., March 24, 2015 (SEND2PRESS NEWSWIRE) — Contrary to popular belief, tuberculosis (TB) has not been eliminated in the U.S. With 2145 cases of active TB in 2014, California alone has 23 percent of the nation’s TB cases. However, this represents only a small fraction of the estimated 2.5 million Californians infected with TB. The California Tuberculosis Controllers Association (CTCA) released a Universal Adult TB Risk Assessment today to support efforts to find those infected with TB, ensure they are treated before they get sick, and successfully eliminate TB.

Public health experts have been spread particularly thin this year, implementing precautions to identify and contain ebola followed closely by an extensive measles outbreak. Meanwhile, TB outbreaks are limited because of the constant attention, vigilance, and ongoing efforts of TB experts at the local and state level.

In order to support TB elimination efforts in California, CTCA is releasing a Universal Adult Risk Assessment for TB. This tool will help medical providers identify patients at greatest risk for having TB infection and developing and therefore spreading TB disease. CTCA celebrated this release with a flash mob in Berkeley on Saturday, March 21.

“Putting a Universal Adult Risk Assessment for TB into the hands of medical providers will help them identify who is most at risk for getting sick with TB,” says CTCA Communications Committee Chair Julie Vaishampayan, MD, MPH. “These are the people that we need to treat for TB infection before they get sick. TB infection treatment is the only way to prevent progression to TB disease.”

TB can be serious and life-threatening but treatable and curable. TB is spread when a person with active TB bacteria in their lungs coughs and the bacteria are released into the air. People who breathe in this same air can become infected. When a person is infected with TB, they may not develop TB disease or show any signs or symptoms for months or years, but then, they too can spread TB to others continuing the cycle.

“We can’t be complacent just because progression from infection to disease takes a little while,” says CTCA President Michael Stacey, MD, MPH. “TB is an old persistent global plague, and it’s important to remember that it kills 1.5 million each year and 2 billion are infected. Here in California, TB kills one out of ten people diagnosed with TB disease.”

Addressing Public Health concerns such as ebola, measles, and TB is the responsibility of local Public Health Departments. No one else does this work, yet these services are threatened by shrinking resources and increasing workload demands.

“Public health programs must have adequate resources to ensure that TB does not spread,” says Linda Civitello, President and CEO of Breathe California. “Airborne infectious diseases like TB know no borders.”

PHOTO Caption: California TB Controllers Association celebrated World TB Day and the release of a new tool to tackle TB, with a flash mob over the weekend in Ohlone Park. 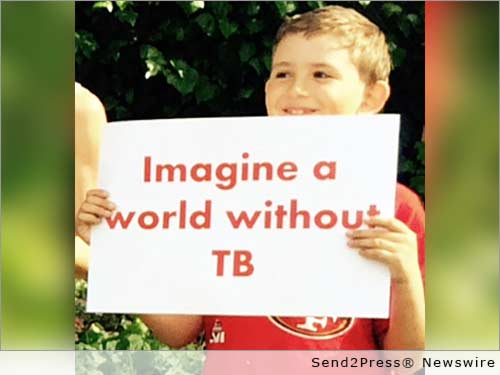 NEWS ARCHIVE NOTE: this archival news content, issued by the news source via Send2Press Newswire, was originally located in the Send2Press® 2004-2015 2.0 news platform and has been permanently converted/moved (and redirected) into our 3.0 platform. Also note the story “reads” counter (bottom of page) does not include any data prior to Oct. 30, 2016. This press release was originally published/issued: Tue, 24 Mar 2015 08:02:00 +0000

View More California Business News
"Putting a Universal Adult Risk Assessment for TB into the hands of medical providers will help them identify who is most at risk for getting sick with TB," says CTCA Communications Committee Chair Julie Vaishampayan, MD, MPH.

The California Tuberculosis Controllers Association is made up of local public health providers working to eliminate TB in California by working with community medical providers in detecting, treating and preventing TB. Purpose: To eliminate the threat of TB from California through leadership and the development of excellence in TB prevention and treatment.

LEGAL NOTICE AND TERMS OF USE: The content of the above press release was provided by the “news source” California Tuberculosis Controllers Association or authorized agency, who is solely responsible for its accuracy. Send2Press® is the originating wire service for this story and content is Copr. © California Tuberculosis Controllers Association with newswire version Copr. © 2015 Send2Press (a service of Neotrope). All trademarks acknowledged. Information is believed accurate, as provided by news source or authorized agency, however is not guaranteed, and you assume all risk for use of any information found herein/hereupon.