FORT WORTH, Texas, Dec. 4, 2017 (SEND2PRESS NEWSWIRE) — The Fort Worth production of The Littlest Wiseman started as a modest junior high school play about the humble birth of Jesus. Now in its 57th consecutive annual run, the play has evolved into an elaborate production that is one of Fort Worth’s longest-running Christmas season entertainment events. 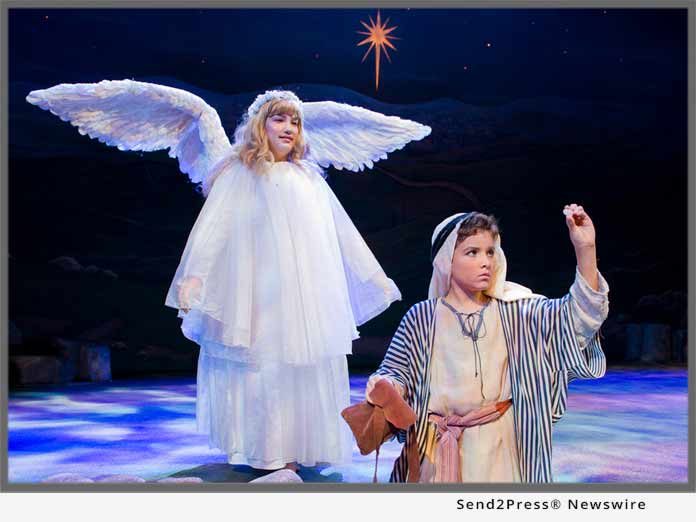 “It’s a very simple heartfelt story set against amazing visuals and stunning scenery,” said Assistant Director Suzi McLaughlin, a 44-year veteran of the production who was director for 17 years.

But the production wasn’t always so elaborate as it is now, a cast member of the early years said.

“The play was a lot simpler – ‘pretty much bare bones’ – during the first years when The Littlest Wiseman was staged at McLean Junior High School,” said Lloyd Walsh. “It was short and simple and didn’t have singing and dancing. It was just a simple junior high play.”

Walsh’s parents, the late F. Howard and Mary D. Walsh, first saw the play in Colorado Springs, Colo. The Littlest Wiseman was written by the Walsh’s longtime friend, the late Dr. Lloyd Shaw, superintendent of Cheyenne Mountain School District in Colorado where the play was staged for many years beginning in 1917. Shaw included poetry written by his wife, the late Dorothy Stott Shaw, throughout the script.

“My parents were very close with the Shaws,” Walsh said, and they thought the play ‘was so special’ that “they wanted a Christmas pageant here [in Fort Worth] to give as many people as possible exposure to the story of Christmas.”

The late Joe Cleveland, music teacher at McLean, produced and directed the initial Fort Worth production. It was his idea to add a bell choir to the school’s music curriculum and to include the bells in a carol service before play performances. The Walshes agreed and purchased a set of bells for the school. Lloyd Walsh was among the original members of the bell choir, which was formed in 1964 and first participated in “The Littlest Wiseman” that year. In honor of their friend, the Walshes named the group The Dorothy Shaw Bell Choir.

“In 1966, the production moved from McLean to the newly opened Scott Theatre. The move offered opportunities for the production to expand and add more elaborate staging,” said Walsh.

A grant from the Walsh Foundation funds all aspects of the production, which is truly a gift to the community because every seat at every performance is free.

Tickets may be reserved at http://www.thelittlestwiseman.org/.

Learn more about The Dorothy Shaw Bell Choir at: http://www.dorothyshawbellchoir.org/

More from The Littlest Wiseman

ABOUT THE NEWS SOURCE:
The Littlest Wiseman

The Littlest Wiseman, a play pageant of the Nativity, is presented as a Christmas gift to the community of Fort Worth, Texas by The Dorothy Shaw Bell Choir through a grant from The Walsh Foundation.

LEGAL NOTICE AND TERMS OF USE: The content of the above press release was provided by the “news source” The Littlest Wiseman or authorized agency, who is solely responsible for its accuracy. Send2Press® is the originating wire service for this story and content is Copr. © The Littlest Wiseman with newswire version Copr. © 2017 Send2Press (a service of Neotrope). All trademarks acknowledged. Information is believed accurate, as provided by news source or authorized agency, however is not guaranteed, and you assume all risk for use of any information found herein/hereupon.