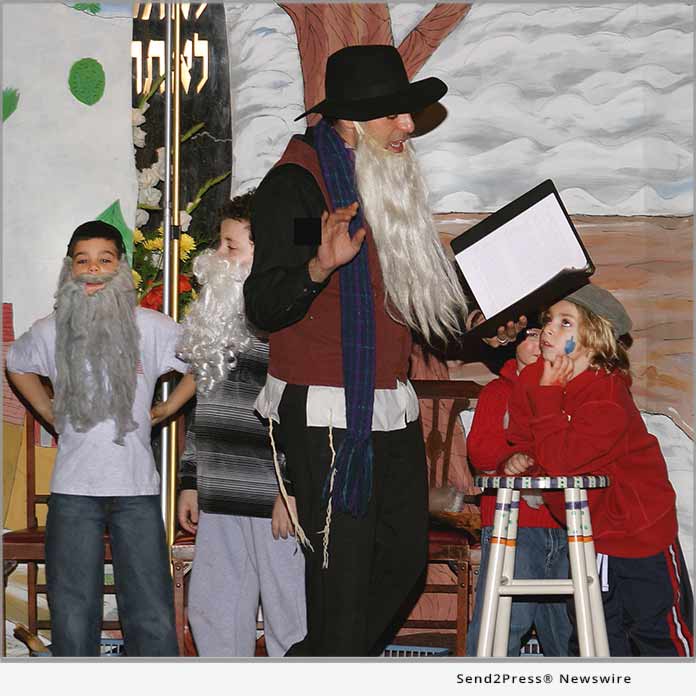 “A Confused Hanukkah,” by Jon Koons, is adapted from his popular children’s book of the same name. It makes its Off-Broadway debut this year during Hanukkah week, after successful performances across the United States, and before its imminent production as an animated musical film.

Koons, also a veteran Broadway and film actor, performs his own work accompanied on the clarinet by Broadway musician Mikki Ryan Koons (“Wicked,” “The Lion King”), who happens to be his wife. Rounding out this true family affair is a special appearance by their comedically gifted 13-year-old son, Merlin Ryan Koons.

A few lucky kids from the audience will be called up to help act out the colorful story that actor Leonard Nimoy called “an absolutely charming addition to the funny and heartwarming tales of those lovable fools” from the legendary, mythical town of Chelm. Publisher’s Weekly called the show “a love letter to every family that resists December’s siren song of assimilation.”

“A Confused Hanukkah” is fun for audiences both young and old. Dreidels will be given to all children in attendance, and there will be a drawing to win a menorah at each performance.

“The Last Christmas of Ebenezer Scrooge,” adapted by author Marvin Kaye from his novel, is the sequel to “A Christmas Carol” that Charles Dickens probably meant to write but never did. Picking up right where “Carol” left off, and written in true Dickensian style, “The Last Christmas of Ebenezer Scrooge” depicts a kindlier Scrooge struggling to right the unresolved wrong hidden within Dickens’ original story. The moving narrative explores in depth the issue of anti-Semitism briefly touched upon in the original, evoking the spirit of the season and the period in which it takes place.

According to the New York Times, “‘The Last Christmas of Ebenezer Scrooge’ is more than an adventure. It is an exploration of friendship, penitence, guilt, anti-Semitism and brotherhood in the true spirit of the season…the venerable Open Book readers theatre company generously rewards a visit.” Theatre Talk adds, “New York needs to make room for a tradition with substance…(this show) will definitely put you in the Christmas Spirit.”

“The Last Christmas of Ebenezer Scrooge” is appropriate for adults and teens.

Tickets, which can be used for either show, are $25, available at https://www.artful.ly/the-open-book-theatre or at the door. Holiday Special: buy two, get one free.

More from The Open Book Theatre

ABOUT THE NEWS SOURCE:
The Open Book Theatre

The Open Book Theatre, established in 1975, is New York City's first and longest-lived readers theatre company. For over 40 years The Open Book has presented the best of all worlds of literature — drama, comedy, prose, poetry, even nonfiction — to our culturally diverse audiences, including literature of excellence likely to be bypassed by more traditional theatre companies.

LEGAL NOTICE AND TERMS OF USE: The content of the above press release was provided by the “news source” The Open Book Theatre or authorized agency, who is solely responsible for its accuracy. Send2Press® is the originating wire service for this story and content is Copr. © The Open Book Theatre with newswire version Copr. © 2019 Send2Press (a service of Neotrope). All trademarks acknowledged. Information is believed accurate, as provided by news source or authorized agency, however is not guaranteed, and you assume all risk for use of any information found herein/hereupon.