WHEELING, W.Va., Jan. 20, 2022 (SEND2PRESS NEWSWIRE) — Tuesday the 18th in a YouTube post about the Candidate visiting Pool’s Castle. Tim Pool runs a popular podcast, more popular than CNN. He has the power to help promote an unknown Congressional candidate like the one running in his District, Craig Roberts. Recently, Tim has been speaking about helping candidates like Craig in the primaries because Tim said if they did help in the primaries then there will only be Establishment Candidates to support in the General Election. 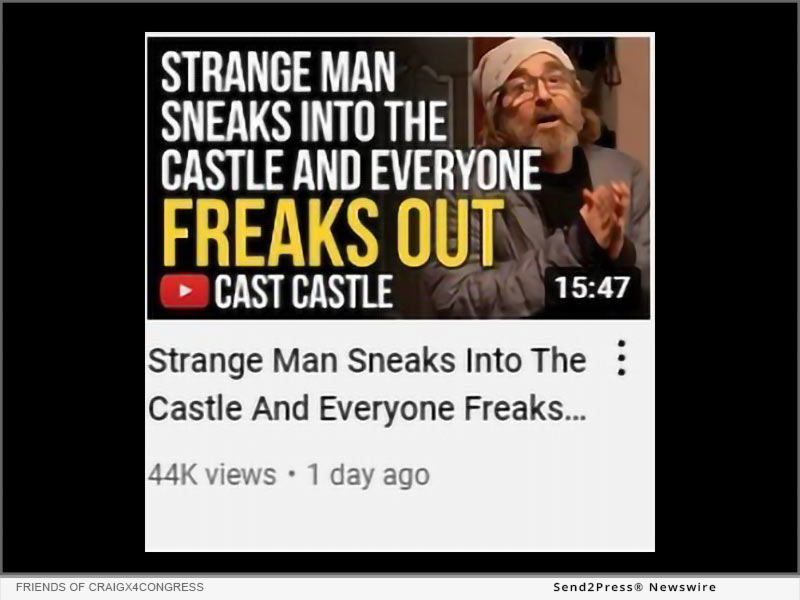 Trump also agree to support SMART Republicans to specifically get rid of 13 RINOs. Candidate Craig Roberts happened to live in one of those Districts. It is being renamed this year to District 2 in West Virginia because of the State’s shrinking population they lost another Congressional Seat. Craig Roberts is now running against two establishment millionaire Republicans, and he is a working-class candidate. He runs an online Judeo-Christian Church called Temple 420 where he recently did a 7-week online Bible study about the Four Horseman of the Apocalypse. He was heavily censored and although very proud of the work it didn’t build up a following because of censorship.

Pool is creating an online beef with the candidate. Roberts went their offices, which were listed on Apple maps as, “Tim Pool Cast Castle” to leave his information with Security that was non-existent. After being invited into the house by “Ben” and explaining he was not with James O’Keefe and his group he asked to leave his info and Ben insisted he speak to the guys in the studio. There was a brief encounter with Luke Rudowski where Luke said, “Leave your info with Ben.”

“As I was writing down my information, when someone or several people started calling my name multiple times.” The candidate claims he knocked on the door and the video shows Ben admitting he waved Craig into the house. “I was never more than 10 feet from the door and always in the presence of Ben. The only time I stepped away from the kitchen counter where I was writing my info for the show’s producer was when they called my name.”

Tim Pool’s and the Candidates stories differ. The candidate claims he stepped away from the kitchen counter to see who was calling his name and the moment he turned around there was giant SRL camera on a gib in his face and was confronted by a guy named Chris making it look as if he had just walked in the house and was wandering around aimlessly without being invited in by Ben. The candidate says, “Ben invited me in, I politely explained myself and Ben gave me a pen and paper to write my info on. They are making their viewers believe I broke in for clickbait, but I am happy for the publicity I was not seeking.”

“Most of my donations have been for $4.20” said the Congressional candidate. “I want to serve the country, but it is hard to raise money when you are an unknown person. I thought Tim could help.”

The candidate has been using social media to build a following but is continually banned and censored for his unpopular beliefs. He’s anti-vaxx mandates and pro-marijuana. “I produced shows for Cali-Plug Studio prior to the plandemic and we had an armed guard with an audience a millionth the size of Pool’s. It was my intention to speak to their security and there was none, so Tim’s video accusing me of breaking and entering is a lie, clickbait. I was trying to leave my info not be a part of his world.”

“When Glenn Beck had me on CNN there was security that I had to pass through,” claimed the candidate. “I have known about Luke for years from his films, but this Pool character,” the candidate chimed on stating he hadn’t heard of Tim until he recently had Joe Rogan and Alex Jones on his show. “I am in films with Joe Rogan and Alex Jones. Joe was at Temple 420 the very first time I preached the Word.” The candidate from West Virginia claims to have a lot of weird encounters with celebrities and has written several books. “Joe, Eddie Bravo and producer Kevin Booth all came to hear me preach my first time on Hollywood Blvd. and I absolutely sucked!”

The candidate concluded, “Tim Pool seems to be trying to increase his audience with a clickbait video about me making himself a victim like everyone on the Left. He really is a Lefty from the research I’ve done. My goal was to raise money at CraigX.com. I need $800 more dollars in tax-deductible donations to qualify for the primary. I appreciate everyone’s love and support for my candidacy. Thank you very much and God bless America.”

PAID FOR BY FRIENDS OF CRAIGX4CONGRESS

View More Elections and Politics News
"Most of my donations have been for $4.20" said the Congressional candidate. "I want to serve the country, but it is hard to raise money when you are an unknown person. I thought Tim could help."

More from Friends of CRAIGX4CONGRESS

ABOUT THE NEWS SOURCE:
Friends of CRAIGX4CONGRESS

LEGAL NOTICE AND TERMS OF USE: The content of the above press release was provided by the “news source” Friends of CRAIGX4CONGRESS or authorized agency, who is solely responsible for its accuracy. Send2Press® is the originating wire service for this story and content is Copr. © Friends of CRAIGX4CONGRESS with newswire version Copr. © 2022 Send2Press (a service of Neotrope). All trademarks acknowledged. Information is believed accurate, as provided by news source or authorized agency, however is not guaranteed, and you assume all risk for use of any information found herein/hereupon.