Two angled attachment arms provide one point connection to the circular retractor ring increasing stability and minimizing the frame profile. Unlike other systems, the Phantom AL Retractor includes a lighting system that directly illuminates the surgical site using a flexible arm and low heat LED light. The system also includes a variety of semi-radiolucent retractor blades that are capable of independent retraction and angulation to accommodate the diverse anatomical needs of the patient. 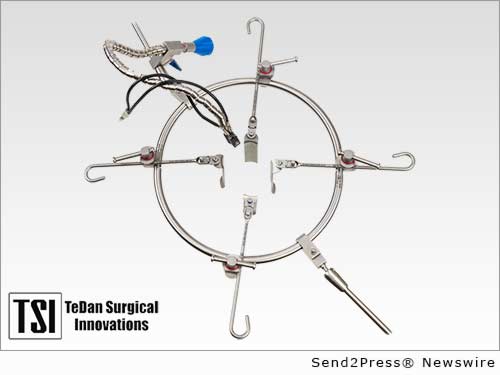 NEWS ARCHIVE NOTE: this archival news content, issued by the news source via Send2Press Newswire, was originally located in the Send2Press® 2004-2015 2.0 news platform and has been permanently converted/moved (and redirected) into our 3.0 platform. Also note the story “reads” counter (bottom of page) does not include any data prior to Oct. 30, 2016. This press release was originally published/issued: Mon, 06 Apr 2015 15:52:06 +0000

TeDan Surgical Innovations was founded in 2006 with the goal to innovate and address evolving techniques in surgical access. The company has developed a wide variety of retractors and disc prep instruments for posterior, lateral and anterior spine, as well as cardiothoracic, neurological and orthopedic procedures. TeDan Surgical Innovations is committed to providing high-quality, state-of-the-art medical devices that address customer and market needs.

LEGAL NOTICE AND TERMS OF USE: The content of the above press release was provided by the “news source” TeDan Surgical Innovations or authorized agency, who is solely responsible for its accuracy. Send2Press® is the originating wire service for this story and content is Copr. © TeDan Surgical Innovations with newswire version Copr. © 2015 Send2Press (a service of Neotrope). All trademarks acknowledged. Information is believed accurate, as provided by news source or authorized agency, however is not guaranteed, and you assume all risk for use of any information found herein/hereupon.