HONG KONG, China, Jan. 2, 2018 (SEND2PRESS NEWSWIRE) — TuneFab (www.tunefab.com), an advanced and professional digital program solution developer, today officially announced the new version with updates of its popular Apple/iTunes Music, Audible/iTunes audiobooks formats conversion software – TuneFab Apple Music Converter. The product is one of the most powerful tools to achieve the format conversion of audio files, for the cause of being more compatible with Win 10/8/7/Vista/XP and the latest iTunes version. 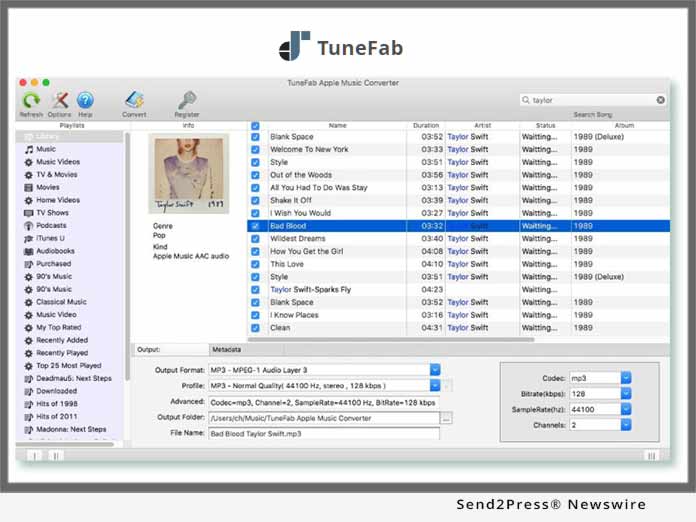 TuneFab always sticks to the aim – “bring free to digital life.” It provides the applications of developing audio and converting audio in Apple Music and iTunes Store, or any other audio files such as audiobooks.

Since TuneFab Apple Music Converter has provided wonderful services on its full control over the conversion of audio files, such as Apple Music, iTunes Music, iTunes audiobooks, Audible audiobooks, etc. Therefore, the release of the new version of the software is significant for not only our company but also users. With the amazing new updates, TuneFab Apple Music Converter will also fix the problem that happened before and offer much more reliable and compatible, safer solution to audio files conversion.

“We are always struggling for the satisfaction of customers and aim at providing the most professional but easy-to-grasp services for them. Hence, TuneFab Apple Music Converter would easily become outstanding versus other conversion services,” stated John Smith, the founder of TuneFab, when he explained the reason to set up and design TuneFab. “Holding this concept, we could now go further to know what features TuneFab Apple Music Converter actually owns.”

Check out the amazing features of TuneFab Apple Music Converter (Windows) below:

Price and Availability:
TuneFab Apple Music Converter is available for Windows and Mac. Users are able to download the software for free — providing 3-minute audio conversion in free trial version. Or users can pay $39.95 for the full version.

While TuneFab M4V Converter focus on obtaining the full control over M4V video files purchased or rented on iTunes Store. Moreover, the new product, TuneFab Screen Recorder concentrates on solving the problem of failing to download movies from some websites, which have the limitation to users to download movies. If you want to read more details, please check out this website: http://www.tunefab.com/

TuneFab always holds the attitude – “Bring Free to Digital Life,” and we are trying to make our programs or services more helpful, convenient, and simple.

If you have more questions or comments on any TuneFab software, please visit our official website: http://www.tunefab.com/ or reach our email address: contact@tunefab.com by sending emails.

View More Apple Mac and iOS News
"We are always struggling for the satisfaction of customers and aim at providing the most professional but easy-to-grasp services for them. Hence, TuneFab Apple Music Converter would easily become outstanding versus other conversion services," stated John Smith, the founder of TuneFab.

ABOUT THE NEWS SOURCE:
TuneFab

TuneFab Software Inc. (TuneFab), through its experience and expertise in developing audio and video converting applications, is gaining more fans around the world. We have a professional software team and we will keep developing better qualified and more user-friendly software to our customers.

LEGAL NOTICE AND TERMS OF USE: The content of the above press release was provided by the “news source” TuneFab or authorized agency, who is solely responsible for its accuracy. Send2Press® is the originating wire service for this story and content is Copr. © TuneFab with newswire version Copr. © 2018 Send2Press (a service of Neotrope). All trademarks acknowledged. Information is believed accurate, as provided by news source or authorized agency, however is not guaranteed, and you assume all risk for use of any information found herein/hereupon.