LOS ANGELES, Calif., Nov. 8, 2019 (SEND2PRESS NEWSWIRE) — Los Angeles is in for a massive infusion of harmonious ripples when “Soundwaves 360° Music Event” rolls on to the boulevard on Thursday, November 14 at the Academy LA. Party goers will be able to surf a kaleidoscope of genres with acts ranging from hip hop to rock. The evening, presented by Brandi Irwin Productions and G-Love Productions, will be flooded with talent. 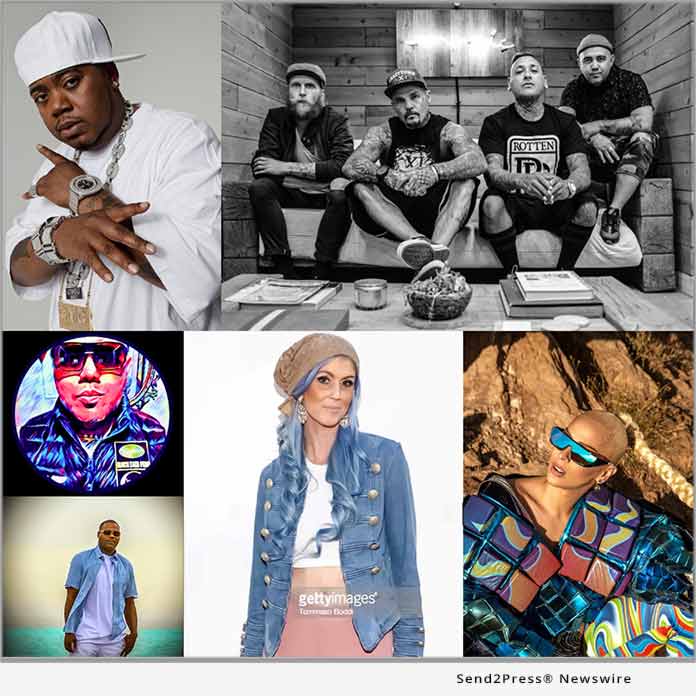 Headliners include the legendary hip hop artist, Twista, known as one of the world’s fastest rappers; “Love & Hip Hop: Miami’s” own Veronica Vega; world renown music producer and artist DJ G-Love and rap infused rockers Crazy Town X with R1ckOne™. Music throughout the night will be provided by alternating DJ’s. The Academy LA is located at 6021 Hollywood Blvd. Red carpet is at 7:00 p.m. and doors open at 8:00 p.m. Tickets are available at EventBrite.com (https://www.eventbrite.com/e/dj-g-love-twista-crazy-townx-veronica-vega-academy-la-tickets-78089023371?aff=ebdssbdestsearch ).

Brandi Irwin, the event host and co-producer cites “Soundwaves 360° Music Event” as a full spectrum of hip hop musical art. “We are so excited to present this explosion of diverse talent! Hip hop as a culture is really a culmination of a variety of styles and sounds. ‘Soundwaves 360° Music Event’ will be a festival vibe in a nightclub setting. Everyone will be able to groove to their favorites while experiencing a medley range of rhythms. Los Angeles has not yet experienced a night quite like this.”

“Soundwaves 360° Music Event” will be Twista’s first Los Angeles performance in four years. The Chicago based entertainer, who once held the title of “Fastest Rapper in the World” according to Guinness World Records, is a veteran multi-genre talent. His 2004 single, “Slow Jamz” (also featured on Kanye West’s debut album “The College Dropout”), featured West and Jamie Foxx and became a number-one hit in the US.

Recording artist and nationally known DJ/ promoter DJ G-Love is one to watch. He will make his L.A. performance debut during the evening, with his single releases, “True Lies,” and “Miss My Flight.” His new album project “Chasing A Grammy,” via Empire Distribution, is slated to drop soon.

Veronica Vega, one of the stars of “Love & Hip Hop: Miami” is known for her single “Wicked,” which features Pitbull, and her viral hit “Pay Me.” Her new single, “A Million,” featuring Quavo, has over 10 million hits on YouTube.

Crazy Town X, one of the first hybrid brands to mix equal parts urban and suburban with their rap infused rock sound, are in the midst of their 20-year anniversary tour with this appearance and have plans to release their new album, “The Beautiful and Insane.” R1ckOne™, well known for his work with the Black Eyed Peas, will perform alongside Crazy Town X.

“Soundwaves 360° Music Event” will bring the night full circle with a lineup of headliners, independent artists and local talent. For more information, tickets and talent updates, go to EventBrite.com (https://www.eventbrite.com/e/dj-g-love-twista-crazy-townx-veronica-vega-academy-la-tickets-78089023371?aff=ebdssbdestsearch ).

View More Music and Recording News
"We are so excited to present this explosion of diverse talent! Hip hop as a culture is really a culmination of a variety of styles and sounds," said Brandi Irwin, the event host and co-producer.

LEGAL NOTICE AND TERMS OF USE: The content of the above press release was provided by the “news source” Brandi Irwin Productions or authorized agency, who is solely responsible for its accuracy. Send2Press® is the originating wire service for this story and content is Copr. © Brandi Irwin Productions with newswire version Copr. © 2019 Send2Press (a service of Neotrope). All trademarks acknowledged. Information is believed accurate, as provided by news source or authorized agency, however is not guaranteed, and you assume all risk for use of any information found herein/hereupon.