LOS ANGELES, Calif., Jan. 13, 2017 (SEND2PRESS NEWSWIRE) — Feraz Ozel, a “brown” comedian, is a light-hearted performer driven by passion, and intelligence, says Uproar Entertainment. His is a diverse and energetic brand of insightful comedy that connects with people from all walks of life. He prides himself on putting on a show that will make you laugh till it hurts, think about a few new things, and remember that regardless of our vast differences, we can all come together for a night of comedy. 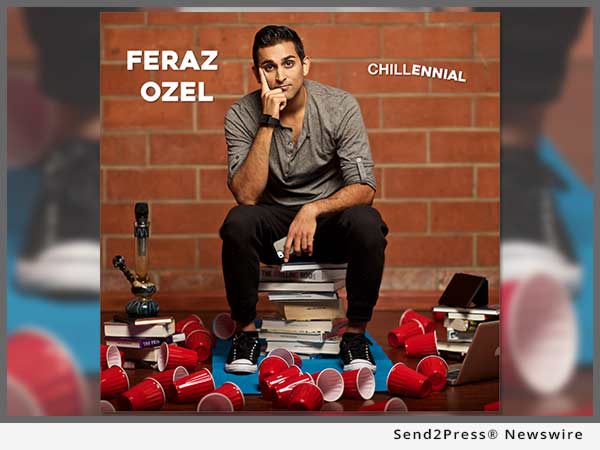 Feraz Ozel’s road to comedy was far from ordinary. When you are born and raised in California, but with an Afghani-Pakistani background, the stage is set for an unusual life. He started doing stand-up at age 20 while in his second year at the University of CA, San Diego (where he graduated magna cum laude). At the time, he was focused on law school and a life in politics. But somewhere between interning for Arnold Schwarzenegger in D.C., international law courses in Budapest, and backpacking through Europe, Feraz realized that stand-up comedy was in fact his true calling. He wanted to make people laugh and enjoy life, and also open people’s minds to new ideas and perspectives.

At age 21 Feraz turned down several law school offers, and acceptance into the CIA (yes, THAT CIA), and geared himself towards becoming the best comic he could be. During the day, he was a passionate fitness trainer, but every night he eagerly looked for a mic, like a crackhead searching for his next fix. At the same time, Feraz understood the value of enriching one’s life. After all, how could he expect to connect with people and challenge ideas, if he didn’t seek opportunities to expand his perspectives and life experience? So, he made it a point to travel as much as possible, often setting up international comedy tours along the way. Since then, Feraz has traveled through 4 continents, sharing laughs, ideas and friendships with people in 24 countries.

Feraz quickly rose to the highest ranks in the San Diego comedy scene and in 2012 he moved to Los Angeles. Since that time he’s become a regular at nearly every major club in Los Angeles, including the Comedy Store and The Hollywood Improv. He’s been seen on national television on “2 Broke Girls,” “Comics Unleashed with Byron Allen,” and “The Doctors” on CBS, as well as featured in Hulu’s “Coming to the Stage,” The Atlantic Magazine and the LA Times. In 2014 he was chosen to be a part of NBC’s prestigious Stand up for Diversity showcase in San Francisco.

In January 2016, he was selected out of 2,000 applicants to be one of twenty performers in, as well as a writer for, CBS’s “Diversity Showcase,” in which CBS promotes comedians they believe to be the stars of tomorrow. Feraz won the Funzine Comedy Competition in Budapest, Hungary, and the San Diego’s Funniest Person competition. Feraz is a part of Ahmed Ahmed’s Next Generation of Evil comedy tour, the sequel to the Axis of Evil which aired on Comedy Central and Showtime.

His podcast INFOdels is gaining immense popularity, and was listed by iTunes as a top 10 “New and Noteworthy” podcast, allowing it to be featured on the front page of iTunes numerous times.

A few of Feraz’s comedic influences include Greg Giraldo and Jon Stewart, who touch upon big sociopolitical issues, as well as guys like Nick Swardson who see the beauty in a good dick joke. Feraz is known for keeping the energy fun and light throughout his show, rarely taking himself or any situation too seriously. His next joke is just as likely to be something that will make you think, as it is an insane party story about his mushroom trip in Thailand. He creates an honest environment, and audiences can’t help but feel as though they’re spending an evening with a friend they’ve known for years. His style is highly unique, and unlike anything you’ve seen before. If you’re lucky, he may even pull out his guitar and hit a few musical numbers.

Uproar Entertainment is committed to recording and promoting today’s most talented comedians. Under the helm of David Drozen, the man who discovered Richard Pryor in early 1970, signed him to his first recording contract, and produced 12 of his albums for the legendary comedy label Laff Records, Uproar nurtures, supports and develops the best comedic talents of our time.