NEW YORK, N.Y., Feb. 13, 2019 (SEND2PRESS NEWSWIRE) – Nonprofit JaneUnChained News Network announced today that New York environmental activists will converge on Brazil’s Consulate in Manhattan on Valentine’s Day, Thursday, February 14! The group plans to march several blocks from the Brazilian Consulate to the United Nations to demand Brazil’s new President be prevented from selling off the Amazon to the highest bidder! 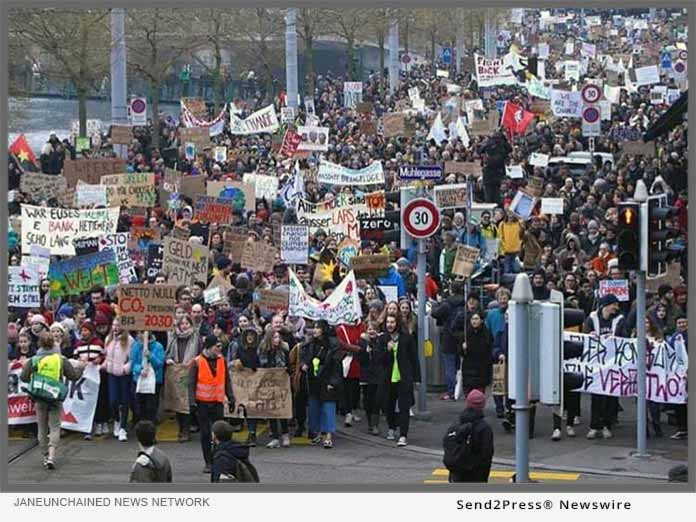 This large group of demonstrators plans to do a mass die-in at the Consulate and, again, outside the UN! Dozens of protesters will fall to the ground simultaneously to symbolize the death and destruction that will occur if President Jair Bolsonaro is allowed to go through with his plan.

Similar demonstrations will be happening simultaneously in Los Angeles, Barcelona, Berlin, Paris, Buenos Aires and other major cities around the globe.

Our planet is in a climate crisis. We are facing ecological collapse and have entered a mass extinction. Brazil’s new president intends to privatize the Amazon, allowing for skyrocketing animal agriculture, mining, and roads. This will result in major deforestation and threaten a region known as the lungs of the earth.

The environmental and indigenous rights group Amazon Watch has described Bolsonaro’s plan as reckless, saying it will bring untold destruction to the planet’s largest rainforest and threatens the existence of indigenous peoples and diverse species who call the rainforest home.

If these plans go forward, a vital carbon sink would be lost along with 20 percent of the global oxygen supply. Our demand is for the United Nations to intervene and call on Brazilian President Jair Bolsonaro to abandon his plans to privatize the Amazon.

We insist that legislation is put in place to enforce a ban on new highways, land clearing, animal agriculture and mining in the Amazon.

ABOUT THE NEWS SOURCE:
JaneUnChained

JaneUnChained was founded by award winning TV journalist and bestselling author Jane Velez-Mitchell. JaneUnChained is a 501(c)(3) Non-Profit that relies on donations to fulfill its mission of speaking for voiceless animals and the environment, and is based in Marina del Rey, California.

LEGAL NOTICE AND TERMS OF USE: The content of the above press release was provided by the “news source” JaneUnChained or authorized agency, who is solely responsible for its accuracy. Send2Press® is the originating wire service for this story and content is Copr. © JaneUnChained with newswire version Copr. © 2019 Send2Press (a service of Neotrope). All trademarks acknowledged. Information is believed accurate, as provided by news source or authorized agency, however is not guaranteed, and you assume all risk for use of any information found herein/hereupon.