Send2Press › Wire › Construction and Building › Building Products › With the Parkland Anniversary Upon Us, South Florida Based Security Company Pledges to Donate Safe Rooms to Schools

With the Parkland Anniversary Upon Us, South Florida Based Security Company Pledges to Donate Safe Rooms to Schools

BOCA RATON, Fla., Feb. 13, 2019 (SEND2PRESS NEWSWIRE) — South Florida based security company, FBS – Fortified and Ballistic Security, announces plan to protect schools in honor of the one year anniversary of the Parkland shooting. For years, FBS has been perfecting their safe environments, or The Sanctuary™, for luxury homes, and the time has come to give back. 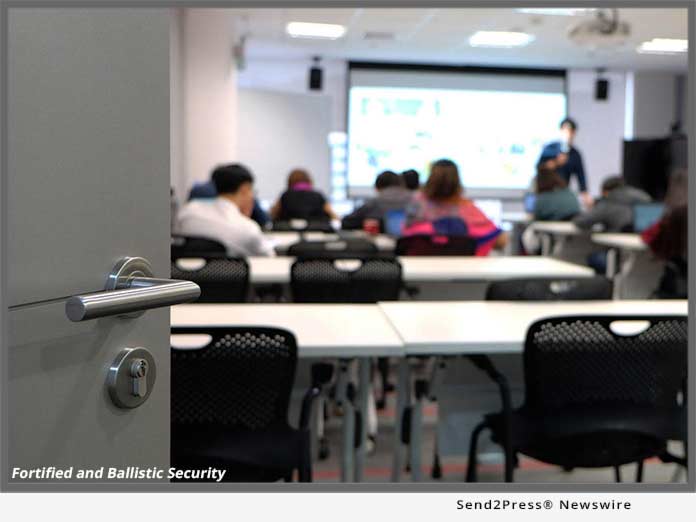 It would be difficult to dispute that our country faces a grave security crisis when it comes to protecting children in our schools. What is often up for debate is how to go about solving this emotional conundrum. The general, repeating pattern looks something like this: a school shooting occurs, debates break out over hot topics such as mental illness and gun control, real resolution feels slow to realize, and many Americans are left feeling helpless and desperately confused about how best to protect our children.

FBS felt especially called to action following the Parkland shooting last February when family, neighbors, clients and friends were directly affected by this tragedy. And, it’s not just Parkland, it’s happened and continues to happen across the country at an alarming rate.

One factor that these schools all have in common is that these buildings do not have designated safe spaces.

After almost a year of actively negotiating with manufacturers and industry partners, FBS is optimistic they have a solution that not only bridges political divides and circumvents the sluggish legislative process, but also allows individuals a chance to take positive action in order to make a legitimate difference.

Starting February 14, 2019, FBS is pleased to announce that for every Sanctuary™ a client installs in their home, FBS will install a Sanctuary™ in a school of the client’s choosing in their name, completely free of charge.

FBS representative, David Vranicar, explains, “FBS is already designing and installing safe environments regularly all over the country. We want to do our part to help. Our manufacturers, employees and other contractors have pulled together to mitigate costs to make this happen. This is just ONE idea. If anyone has suggestions on what more we can do, we’re all ears.”

The Sanctuary™ redefines traditional panic rooms, preserving aesthetics and comfort while also providing the highest level of ballistic security available. The design ensures fortress level security without feeling like you’re in a fortress. Typically reserved for celebrities and politicians, FBS is enthusiastic about giving that same level of protection to our nation’s kids.

These structurally engineered safe environments are custom-made to withstand bullets and hurricane force winds, providing the highest level of security available on the market and proven potential to save lives.

Vranicar points out, “This is an everyone problem. As a parent of school-aged children, I feel it’s critical to find ways to protect our kids, not tomorrow, but now. Our safe environments provide a more dependable and less contentious alternative to the most frequently suggested solutions. This takes policy and cost out of the conversation. It’s about giving back and finding common ground surrounding a common problem.”

Vranicar continues, “we recognize that it’s not a sweeping, all-inclusive fix, but it’s a start. It’s a grassroots effort to turn an act of evil into an act of good.”

To inquire about getting a safe environment installed in a school of your choosing or to share ideas on how you think FBS can help, contact safeschools@getfbs.com.

About FBS – Fortified and Ballistic Security:

FBS – Fortified and Ballistic Security is a pioneer in the security sector, providing fortified, safe environments that are impenetrable without compromising beauty and style.

View More Building Products News
"FBS is already designing and installing safe environments regularly all over the country. We want to do our part to help," says David Vranicar of FBS.

More from Fortified and Ballistic Security

ABOUT THE NEWS SOURCE:
Fortified and Ballistic Security

FBS - Fortified and Ballistic Security is a pioneer in the security sector, providing fortified, safe environments that are impenetrable without compromising beauty and style.

LEGAL NOTICE AND TERMS OF USE: The content of the above press release was provided by the “news source” Fortified and Ballistic Security or authorized agency, who is solely responsible for its accuracy. Send2Press® is the originating wire service for this story and content is Copr. © Fortified and Ballistic Security with newswire version Copr. © 2019 Send2Press (a service of Neotrope). All trademarks acknowledged. Information is believed accurate, as provided by news source or authorized agency, however is not guaranteed, and you assume all risk for use of any information found herein/hereupon.