Send2Press › Wire › Auction › Your Chance to Own the Lasso of Truth! Rare Wonder Woman Comics and Iconic Movie Props Up for Auction

Your Chance to Own the Lasso of Truth! Rare Wonder Woman Comics and Iconic Movie Props Up for Auction

NEW YORK, N.Y., July 28, 2020 (SEND2PRESS NEWSWIRE) — Wonder Woman, the most popular female superhero, continues her meteoric rise. Her much-anticipated movie sequel, “Wonder Woman 1984,” will be released in early fall. But before then, fans and collectors can score a piece of her magic, including original comic books and a one-of-a-kind movie prop, thanks to ComicConnect’s August Event Auction. They’ll also be able to bid on coveted superhero movie props, which rarely – if ever – come up for auction. 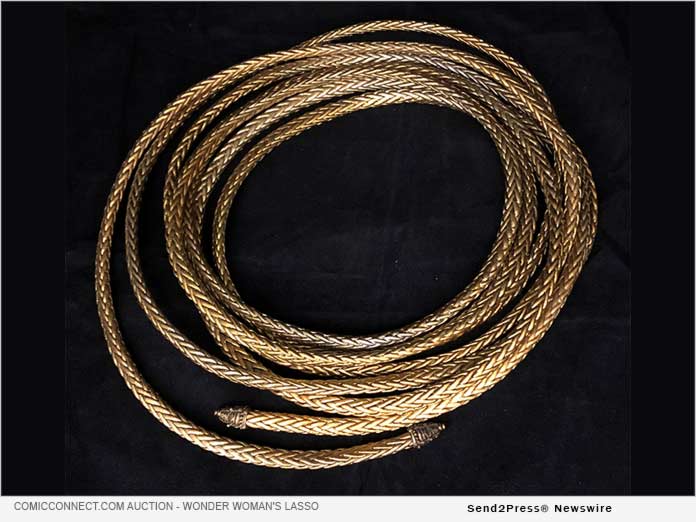 And, he notes, Wonder Woman is special. She’s not only as popular as Batman and Superman, she’s also an authentic feminist icon.

The creation of Dr. William Moulton Marston, the Amazing Amazon first appeared in comics in 1941. Not surprisingly, her character proved popular with little girls – including feminist activist Gloria Steinem, who, in 1972, put her on the inaugural cover of Ms. magazine, a groundbreaking feminist publication. In 2016, the United Nations named Wonder Woman a UN Honorary Ambassador for the Empowerment of Women and Girls. Her recent movies have brought her even more fans.

ComicConnect’s Event Auction #43 kicks off on August 1 and ends August 24-28. Some of the most anticipated items include:

This incredibly-rare production item was created for Wonder Woman’s first movie appearance. It includes a Certificate of Authenticity from Hero Prop, a highly-respected dealer of movie memorabilia.

The lasso, Wonder Woman’s signature weapon, compels those in its grasp to tell the truth. (Ironically, her creator, Dr. Marston, also invented the first lie detector.) It’s expected to sell for $15-$20,000.

Comics featuring a character’s first appearance are typically the most valuable. This 1941 comic marked Wonder Woman’s first appearance and is the highest-graded copy in existence. In 2017, it sold for $936,223, so this time it may break $1 million.

Also the highest-graded copy in existence, this comic marked the first appearance of Cheetah, Wonder Woman’s archenemy. It’s particularly significant because Cheetah, as played by Kristin Wiig, is featured in the upcoming movie.

As superhero movies have triumphed at the box office, movie props have become another sought-after collectible. These storied rarities – all which come with Certificates of Authenticity – will also be up for auction:

Comics and Collectibles Continue to Increase in Value

According to Zurzolo, despite the COVID-19 crisis, comic and collectibles sales have been brisk, perhaps as collectors find more time to devote to their collections. Because of the heightened interest in Wonder Woman, he expects to see some record-breaking sales.

Those who are interested can follow the bidding in real-time at ComicConnect. In addition to vintage comics, original art, and video games, the auction house has recently expanded to offer original movie props, concert posters and pulp fiction.

Vincent Zurzolo is co-owner of Metropolis Collectibles, the world’s largest vintage comic book dealership, and ComicConnect.com, its online auction arm. He is Curator of Metropolis Gallery, a rare comic art gallery in Manhattan. He and his business partner Stephen Fishler hold five Guinness World Records for the most expensive comics and collectibles ever sold. A recognized authority in comics as investments, he appears frequently on television and in print.

ABOUT THE NEWS SOURCE:
ComicConnect

Vincent Zurzolo is co-owner of Metropolis Collectibles, the world's largest vintage comic book dealership, and ComicConnect.com, its online auction arm. He is Curator of Metropolis Gallery, a rare comic art gallery in Manhattan. He and his business partner Stephen Fishler hold five Guinness World Records for the most expensive comics and collectibles ever sold. A recognized authority in comics as investments, he appears frequently on television and in print.

LEGAL NOTICE AND TERMS OF USE: The content of the above press release was provided by the “news source” ComicConnect or authorized agency, who is solely responsible for its accuracy. Send2Press® is the originating wire service for this story and content is Copr. © ComicConnect with newswire version Copr. © 2020 Send2Press (a service of Neotrope). All trademarks acknowledged. Information is believed accurate, as provided by news source or authorized agency, however is not guaranteed, and you assume all risk for use of any information found herein/hereupon.