Pundit: Self-Storage is Poster Child for America’s Addiction to Excess

WALL, N.J., Nov. 30 (SEND2PRESS NEWSWIRE) — Market and economic commentator Peter Grandich has long stated that one of the biggest maladies with the American economy is our obsession with “stuff.” The boom in the self-storage industry, he says, is symbolic of our addiction to excess.

To illustrate his point and warn Americans that it’s time to cut back or face financial Armageddon, the popular commentator has released the “2011 Grandich Self-Storage Factor.”

“We’re spending and consuming way too much and living far beyond our means,” says Grandich, publisher of The Grandich Letter and founder of the financial blog Grandich.com. “In essence, public storage facilities symbolize everything that’s wrong with our skewed, distorted values here in the USA. We need a 12-step cure from our stuff.”

In the “2011 Grandich Self-Storage Factor,” Grandich provides links to a number of commentaries as well as statistics on the rise of the self-storage industry in America, including the fact that one in 10 U.S. households rented a storage unit in 2009.

He also offers ten no-nonsense tips for breaking the spending cycle and helping Americans addicted to excess return to the values of our frugal forefathers.

“Until we, as a society, can go into full blown recovery from our addiction to spending and excess; until we realize that consumption has not left us happier, richer or more fulfilled; until self-storage facilities start closing down instead of breaking ground on new complexes, our economy will never be on solid footing,” Grandich says.

Download a copy of the 2011 Grandich Self-Storage Factor (PDF): http://www.grandich.com/wp-content/uploads/2010/11/self-storage-factor_grandich.pdf .

About Peter Grandich:
Though he never finished high school, Peter Grandich entered Wall Street in the mid-1980s with no formal education or training and within three years was appointed Vice President of Investment Strategy for a leading New York Stock Exchange-member firm. He went on to hold positions as a Market Strategist, portfolio manager for four hedge funds and a mutual fund that bore his name.

Grandich has made a career out of stunningly-accurate calls. He gained national notoriety in 1987 when he called the Black Monday crash and on the next day called for a new, all-time high within two years. Since then, he has made numerous accurate forecasts for the stocks, precious metals, currencies and more, including the October 2007 market top, the March 2009 bottom and this month’s top.

Grandich is the founder of Grandich.com and is editor of The Grandich Letter which was first published in 1984. On his internationally-followed blog, he comments about the world’s economies and markets and posts his views on social and political topics. He is also the founder of Trinity Financial Sports & Entertainment Management Co. (www.TrinityFSEM.com), a firm with a Christian perspective which he started in 2001 with former NY Giant and two-time Super Bowl champion Lee Rouson. 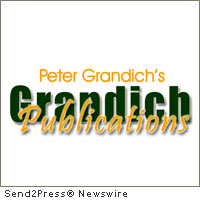 Alternate Headline: Peter Grandich issues report on our need for hoarding ‘stuff’ – offers ways to save

NEWS ARCHIVE NOTE: this archival news content, issued by the news source via Send2Press Newswire, was originally located in the Send2Press® 2004-2015 2.0 news platform and has been permanently converted/moved (and redirected) into our 3.0 platform. Also note the story “reads” counter (bottom of page) does not include any data prior to Oct. 30, 2016. This press release was originally published/issued: Tue, 30 Nov 2010 19:29:41 +0000